Statue Of Love | What to see in Tbilisi

Love Story And The Motion Statue

I hope you are all doing well. If you had read my previous articles you would have come across my experience in Batumi. I forgot to mention in that post an amazing thing which I could see in Batumi, therefore I have decided to mention it here. I also strongly believe that it needs a special description as there is a strong history about this new statue. This amazing place I'm about to share with you today is called 'Statue Of Love' and it is located in the world famous city of Batumi in Georgia.

In Georgia 'The Statue Of Love' is called 'Sekhvarulis Kandakaeba'. This is a massive, 7 metres high statue in the shape of a male and a female. This statue is placed on the shore of the Black Sea in Batumi Boulevard. This amazing piece of art is created by the Georgian artist Tamara Kvesitadze and it is based on the famous love story of Nino and Ali. A miniature of this statue firstly was exhibited in London during an art exhibition after which the original statue has been established in the city of Batumi. The most amazing thing about this statue is that both of the personages move towards each other after 7pm which is controlled with computers. This appears from a distance like both statues kissed each other. The statues are magnificently lighted up what gives the visitors a sight that they can never forget. It took almost ten months to the artist and his team to construct this masterpiece. 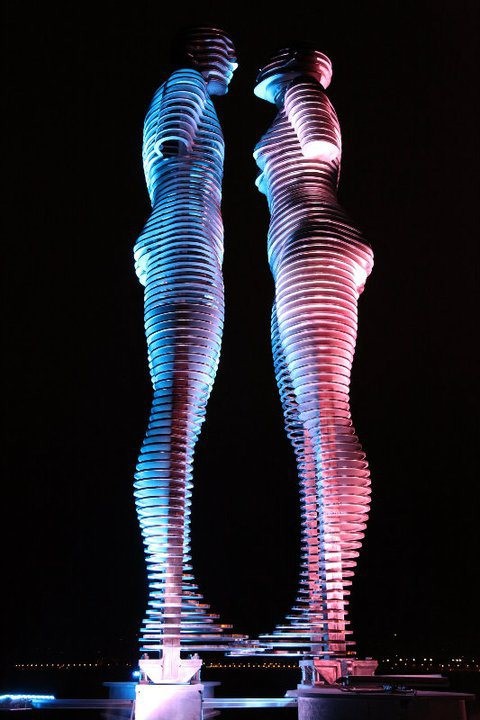 I would also like to share this amazing story of love in short with you. It's famous in this part of the world, just like Shakespear's "Romeo and Juliet". The first book about Nino and Ali was published in German, under a pseudonym of 'Kurban Said' which originally should be spelt as 'Gurban Said'. There are many writers who claim to be the author of this book as it has been edited and reprinted for several times. The most controversial among these authors are an Azer writer called Yusif and Essed Bey. The Georgian people strongly believe that the book is written by Yusif, however there are some debates. The story of the book is interesting. It's about the life of an Azer boy who tries to marry a Georgian Princess. The name of the boy is Ali Khan Shirvanshir; he grows up and studies in a Russian Boys high school. The boy is Azer and therefore belongs to a Muslim Family. As he's growing up, he's getting to know much about the Christian value and other stuff such us dealing with the western world in his school. This makes him to fall in love with the princess Nino who is a Chrisitian. Both of them, Ali and Nino, enjoy their life by travelling from time to time to different places and spending time together. As they are both graduated from high school, Ali wants to marry Nino but she is scared. Ali promises her that she won't have to follow the muslim tradition of wearing veil after their marriage, so there is no need of getting scared. Ali's father accepts this marriage despite being a muslim, as he wants his son to be happy. A twist arises in the story when an Armenian friend of Ali kidnaps Nino. Ali becomes ferocious and he chases his friend who has kidnapped his love. Ali kills his friend and rescues his love. He escapes to Daghestan to save himself from the punishment that he may receive. After several months both Ali and Nino meet again in a small village where they get married and live a poor but happy life.

It is the same time period when the Russian revolution takes place and the Ottoman army is moving to save the city of Baku from the Russians. In this time Ali and Nino flee to Tehran in Iran where Nino experience a tough time following all the Muslim traditions. This makes her unhappy as Ali has promised her that she won't need to follow any of these customs. Both lead a tough time in Iran, so when Azerbaijan gains its independence and the Republic of Azerbaijan is established, they move together to Azerbaijan. There they receive an offer to be ambassadors in France, however Ali doesn't like the proposal and therefore refuses it. Just two years after the establishment of the Republic of Azerbaijan the Russians invade the country again so Ali decides to fight for his homeland. At this time Nino moves to Georgia with her child. Ali dies in the war and the Russians capture the country what leads to the establishment of Soviet rule in Azerbaijan. The story can be considered as a true one, because couples of different cultures were living in Azerbaijan in the early 1900's. This is such a cool story and this story is enacted in plays during several occasions in Georgia.

I hope that you have liked the story, too. When I saw this it enacted in a play for the first time in an old people home I couldn't really understand it. But when I just visited the city of Batumi, saw this statue and just read about the story, it just amazed me. This is a must visit place in Batumi, particularly in the night when the lights are on and the statue is in motion. You can reach Batumi by air, water and land. There are flights to the Batumi International Airport, buses and minivans from different bus stations in Tbilisi and other important cities. Trains depart in the night from the Tbilisi Central Railway Station located in Vukzali.

The statue is such a beautiful sight... so don't miss it! Thanks for reading it patiently and if you have any comments or suggestions, do mention them below. Till I write my next article here keep smiling and cheers!

Do you know Statue Of Love? Share your opinion about this place.