The Neurodevelopment Center | What to do in Tbilisi

Lovely children of the Neurodevelopment Center 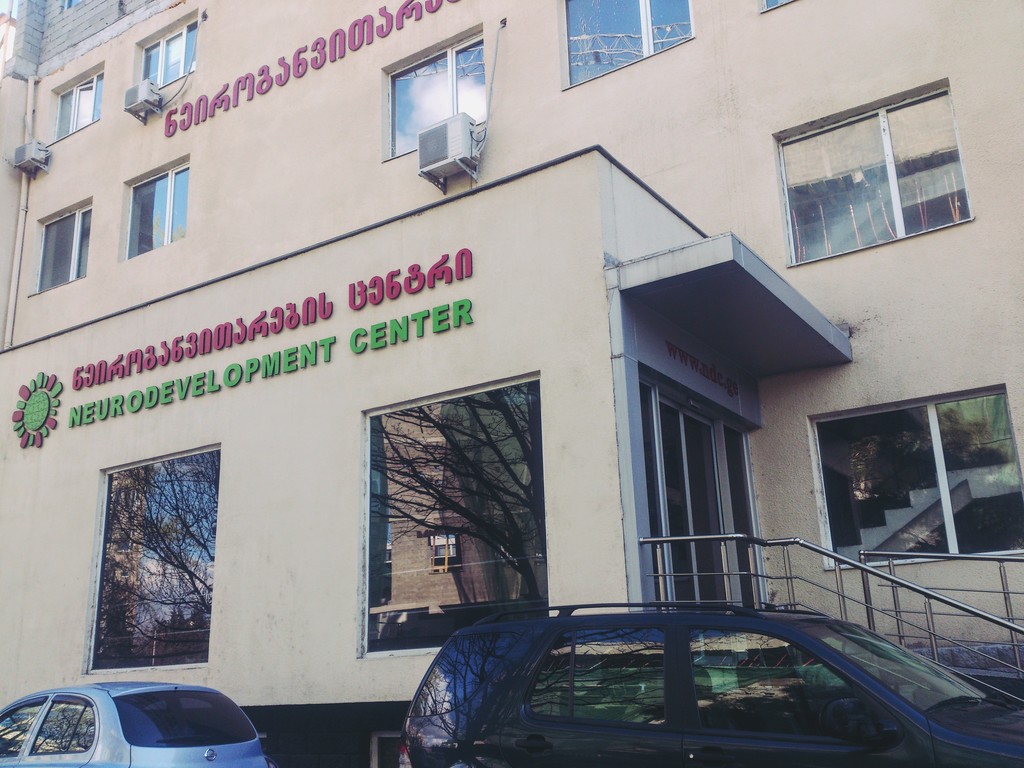 Now I want to tell you about this center that I visited last week. It is called the Neurodevelopment Center and it’s in Dighomi on Lubliana street.

About the Neurodevelopment Center

The Neurodevelopment Center is the largest rehabilitative center in the whole Georgia and it’s oriented on every aspect of disorders _ mental, physical, neurological, emotional, behavioral. There are many disorders that the Neurodevelopment Center offers treatments and exercises for, such as cereblar palsy, autism, epilepsy, neuromuscular diseases.

The Neurodevelopment Center was established in 1997 and it still is the leading center in this sphere in Georgia.

The center exclusively offers its patients the most modern scales and tests for diagnosing the diseases and stuff like that. There are highly qualified therapists and professionals working in the center and they have attained their qualifications and knowledge in the world’s leading countries, such as the USA, England, Germany, Austria. And they just don’t stop getting knowledge. They go to trainings in the whole world and get new information about treatment methods and stuff like that. 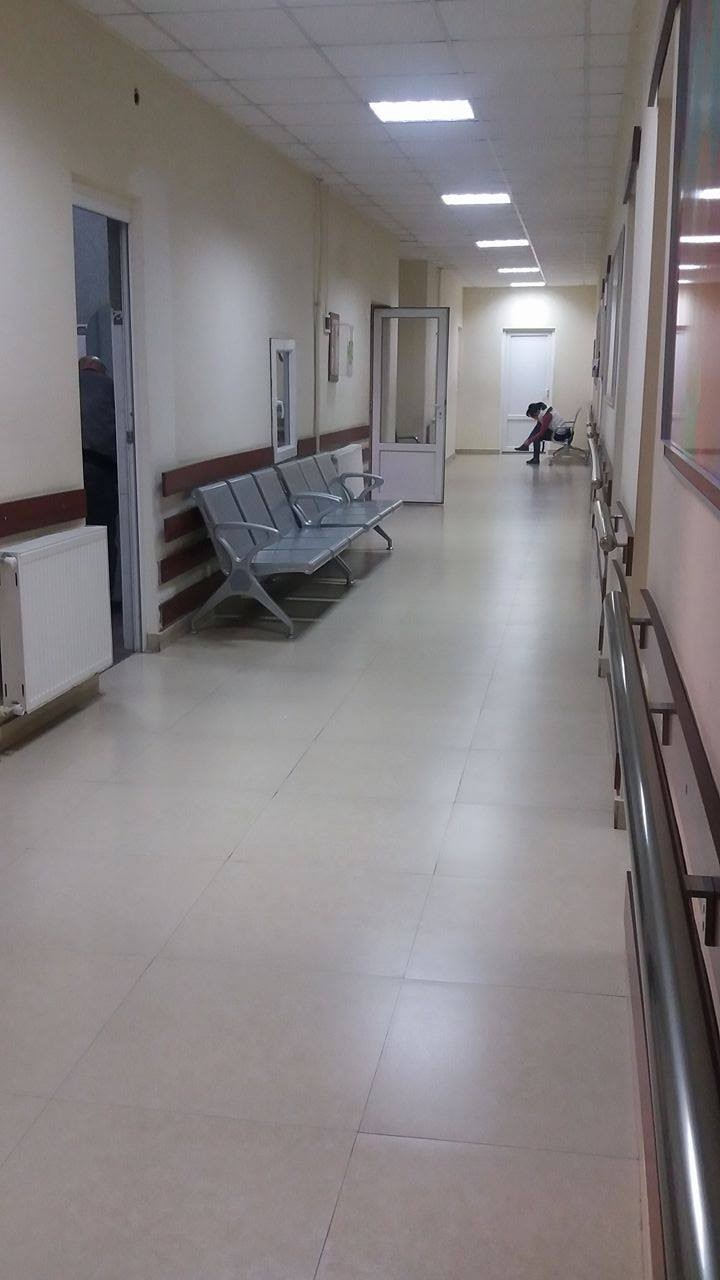 The treatment method and diagnosing is individually conducted. They make individual plans for each of the member of the center. The specialists’ groups work with the patients individually. The groups consist of a neurologist, physical therapist, speech therapist (logopedist), occupational therapist, psychologist, behavioral therapist, psychiatrist, art therapist. Their goal is to reach a maximum of medical improvement, child’s maximal social adaptation and to get an independent, active and successful member of a society instead of an isolated and passive human being.

The environment is very friendly and very cozy. From my point of view, the patients have a good relationship with the doctors and they love socializing with the children as well.

The patients are pediatric group, from the very newborn to 18 years. 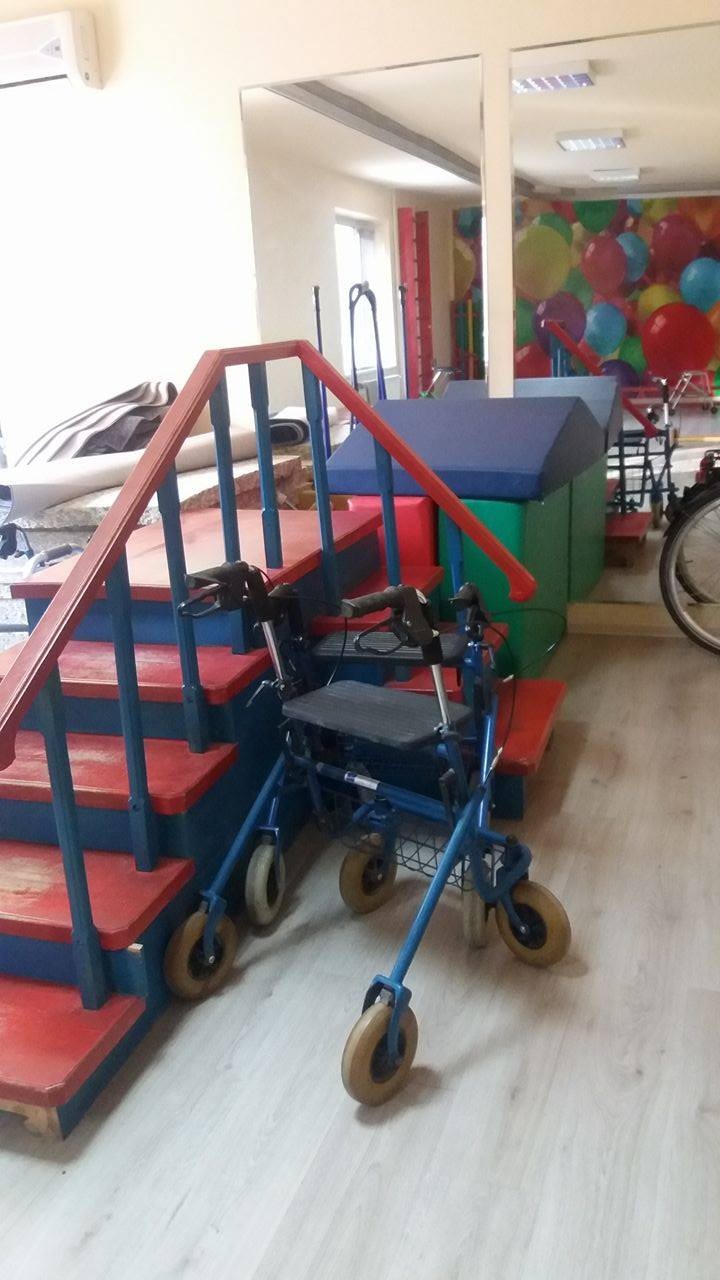 So, as a medical student, I was really interested in seeing what the Center offers to its patients and how are the sessions planned and conducted. So, I made some research and, also, talked to some patients and doctors there.

Who can register in the Neurodevelopment Center?

Everyone with those disorders mentioned above can admit to the center. First of all, there are patients with motor and movement disorders (well, those two are the same, but still…). So , if your child can’t seat, stand, walk, etc. or control his/her head movements, or have an abnormal body posture, involuntary movements or weakness in muscles and others, you can take him/her to the center. And as early you take them there, the better it is!

Also, there are children with mental disorders, such as difficulties in understanding and processing information, etc. 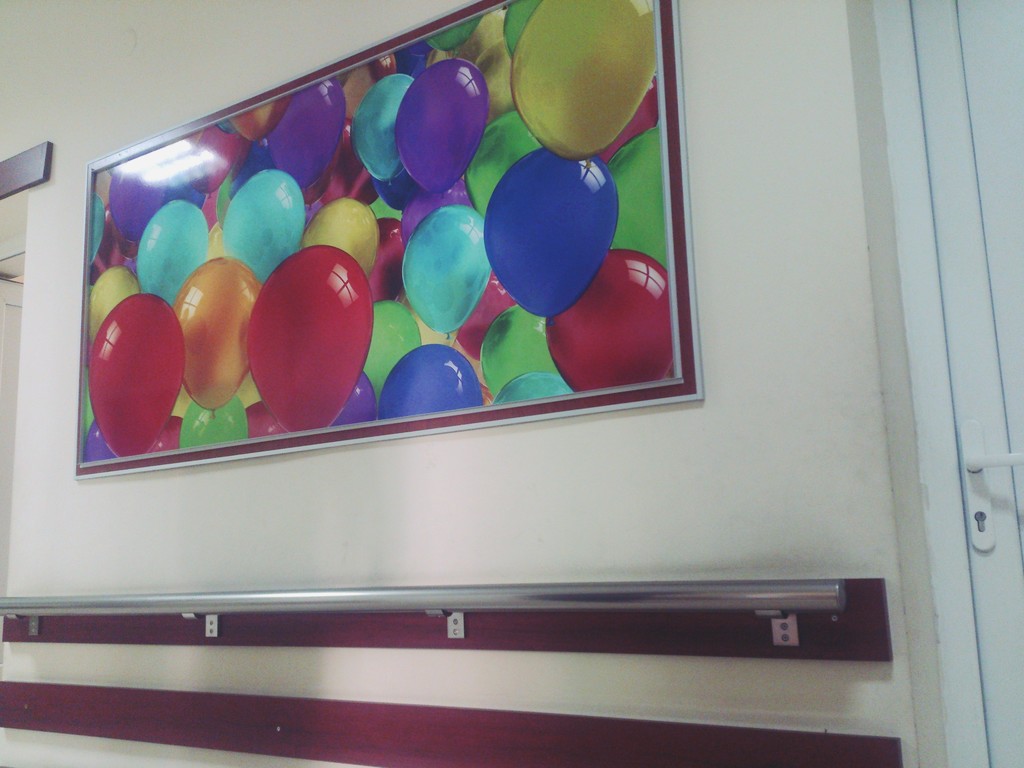 You can also see children with emotional and behavioral disorders. Some of them have aggressive behavior, are easily irritated and cry a lot on insignificant reasons, have problems with communicating with people, adaptation problems, have episodes of involuntary urinating or defecation, etc.

There are also kids, who have speech and language problems as well as chewing, swallowing problems. Also, some fainting, seizures, etc. 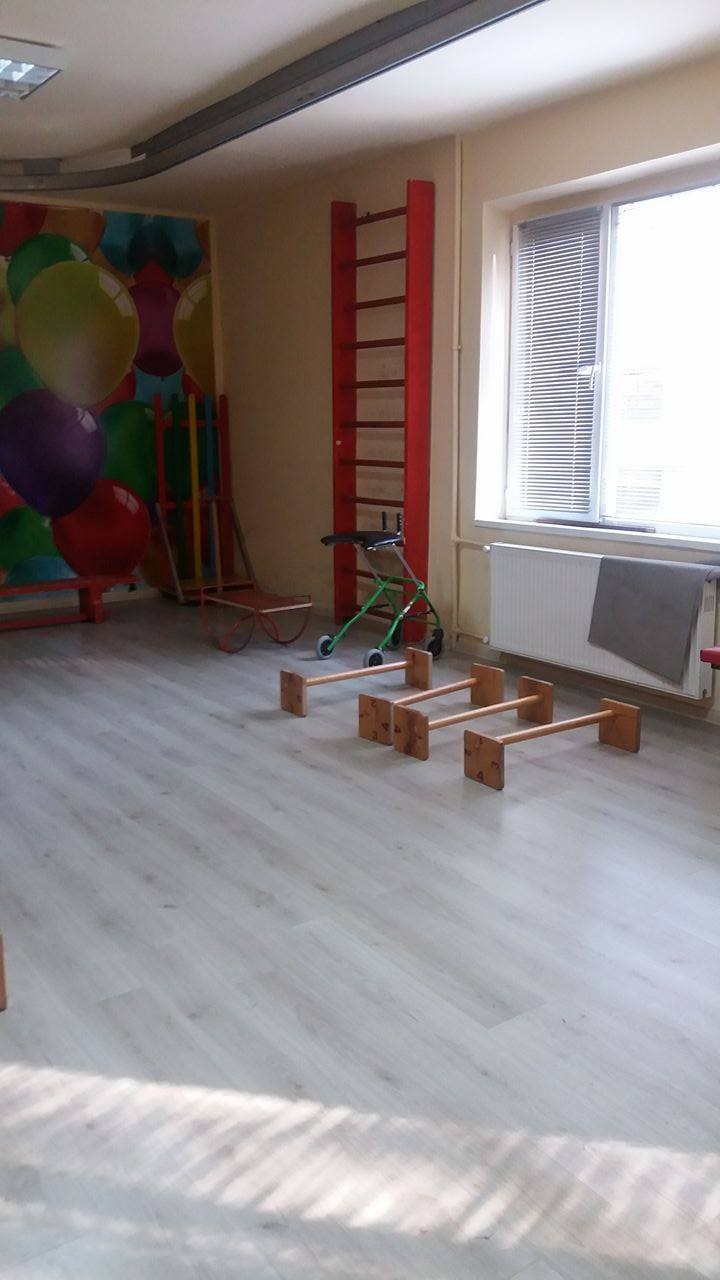 There are not just children with disorders, but healthy children too. Those children need intelligence level evaluation, or improvement of memory and concentration, or they need help of psychologists.

The “Child Rehabilitation State Programme” has been carried out since 1997 and the programme covers full or partial financing of patient treatment according to social rating score.

Also, preparation of orthopedic means is financed 100% by state once per year on voucher principle. 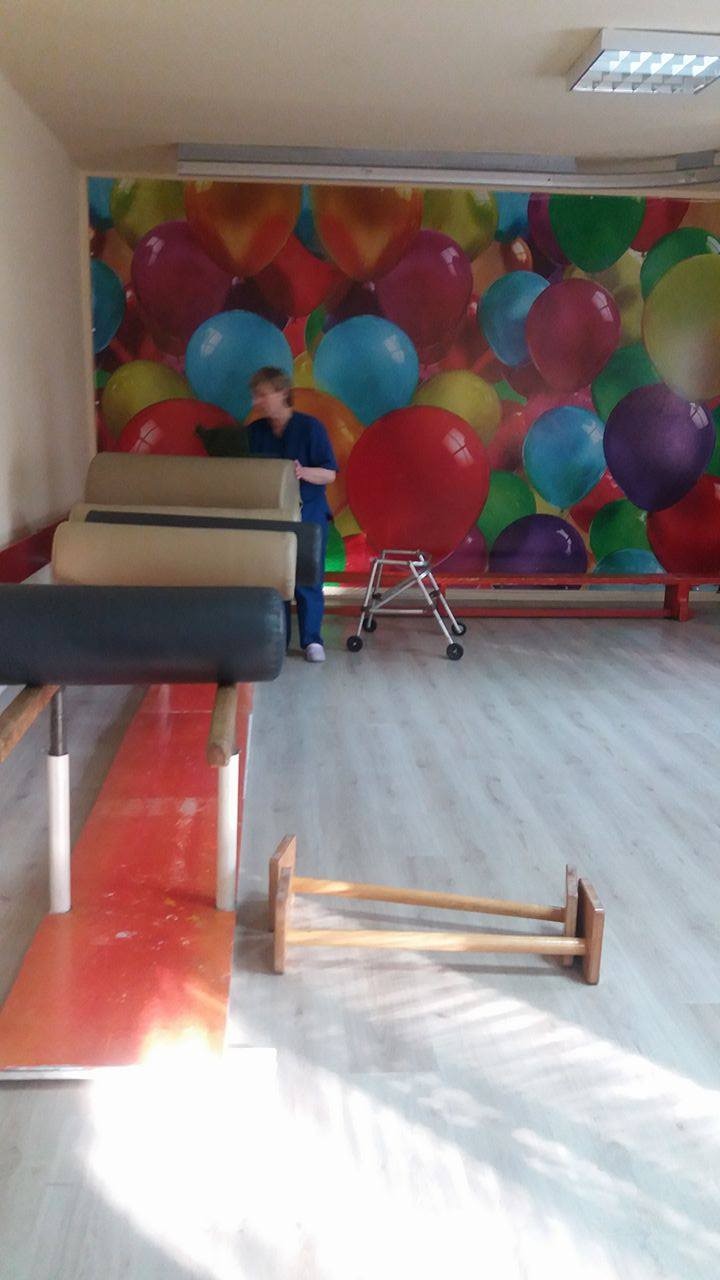 How to get there?

Well, if you are interested in the Neurodevelopment Center and want to visit it, you should definitely know how to get there. Or, well, you can get there by taxi and not bother knowing those things at all. But still, you should know that information, especially if you are a student or even an exchange student, because one may not have that amount of money to waste on a taxi when they can just pay something like 20 or 80 or something Tetris and go to that place.

In general, you can use public transport to get there and that is a very efficient way of getting to the Neurodevelopment Center, if you ask me. So, you can take metro, bus and minibus and it depends on where you are coming from so that you can choose the right transport.

Metro is a great way of transportation _ I just love it, but it doesn’t go directly to the center, or somewhere nearby. So, if you take metro, then you will have to change your transport and take a bus or a minibus somewhere. And if you take metro, you should take Didube metro, because that’s the closest one to Dighomi and there are many buses and minibuses going to that direction from there. At least, that’s how I do it.

Now, about those yellow buses. There are some of them, which go directly to the center from Didube metro. You can take either bus No.51, or 20 or 21, 24 to get to the center from Didube metro. Maybe there are other buses that go there, too, but I don’t remember them now, and it’s better if you know something for sure, otherwise you may end up somewhere in the middle of nowhere and not know where you are or how to get out of there. Once I was going to Dighomi and I just took a wrong bus and ended up somewhere that pretty much resembled the District 13 from that film _  “Banlieue 13” (that is really popular among the people, especially teenagers here), and I didn’t really know how to get out of there, and the bus back to the city center or something was not coming in the next half an hour at least, so I just walked all the way from there and, trust me, it was a long way to somewhere familiar. So, remember to double check the bus number and its route, and don’t be ashamed to ask the driver or someone or the Kontroliori whether or not that bus goes that direction where you want to go.

Yellow minibuses are another way of transportation. You can take a minibus No. 34. It goes all the way from Kakheti Highway to Dighomi, and it costs 80 Tetris in all. It goes through the whole city center, so you will find it in Isani, near 300 Aragveli metro, Avlabari, Liberty Square, on Pekini Avenue, etc. And its working hours are from 7 a.m. till 9 a.m. Besides that, you can take minibus No. 41 or 6 or 100 or 150 to the Neurodevelopment Center from nearby Didube metro and be there in just 5 minutes or so, and they cost 80 Tetris, too. And there’s this minibus No. 7, which costs only 40 Tetris.

Now, you have to walk into some yard to get to the center. There’s this bus stop and some markets around it, and you will see Javrishvili Clinic somewhere on your left, and you should go in between that clinic and the bus stop. There is asphalted road leading you to the clinics there and one of them is the Neurodevelopment Center on your right.

Different sections in the Neurodevelopment Center

There are some floors in the Neurodevelopment Center, and when entering you can see them written on the board so that you won’t get confused or something. There’s also a registration desk in the entrance room, where you can check all the information you want. And those registration desks are on every floor of the center.

So, there are five floors in all. On the zero floor you will find a specialized dental clinic and a cafeteria _ mostly for the staff and parents of the children, I guess, so while the children are exercising or stuff like that, parents can go to cafeteria and have lunch or even children can have lunch there, of course. There’s also a large room and an orthopedic center and a furniture workshop.

On the first floor, as I’ve said, you will see the registration desk and then there’s this large room full of exercising equipment and all those things are in different colours so that the environment is really coloufrul and happy, and that is good for the kids. There are different rooms on the first floor, where children have individual sessions and massages and stuff like that. They have those wooden stairs, too, where they can stand without anyone helping them, etc.

Going on the second floor, there is a neurorehabilitation department. They have a neurologist, occupational therapist, speech therapist. There they also have electroencephalography and an electromyography.

You will find mental health department on the third floor, where there are psychologist, psychiatrist, art therapist, and also an administration is there with a small conference hall.

And on the fourth floor, you can see children with autism, so there’s an autism section there and there are also children with behavioral disorders.

Seeing those children try their best and communicate with each other is a great experience for everyone. It makes you want to change and be a better person so that you can help others in any way. Even just some little things can be very helpful for everyone, you know.

Do you know The Neurodevelopment Center? Share your opinion about this place.