Murcia Cathedral | What to see in Murcia

The Beautiful Cathedral of Murcia

Murcia Cathedral, which is actually called the Cathedral of St. Mary, is located in the historical centre of Murcia, on la Plaza del Cardenal Belluga.

Construction began in 1394 and was finished in 1465; however they continued to refurbish it and add other important parts such as the Bell Tower and the Vélez Chapel. In fact, it's hard to actually imagine the cathedral without its iconic tower; you can see it from all over Murcia and it has become the symbol of our city.

It's principally of Gothic style however due to additions that were later built, it also contains renaissance, neoclassic, and baroque features.

It is the seat of the Diocese of Cartagena alongside the Episcopal Palace which is located on the same plaza as the Cathedral, but as its name suggests, it wasn't always this way. What a lot of the citizens of Murcia don't know is that where the cathedral is now, once stood a Great Mosque until Jaime I The Conqueror conquered the city in 1266 and decided to consecrate the mosque to Christian worship. 30 years later the seat of the Diocese was moved to Murcia for two reasons; the first being that Cartagena wasn't very safe at the time, and the second, because Murcia was the capital of the region and thus it made more sense, although the Cartagena name remained. 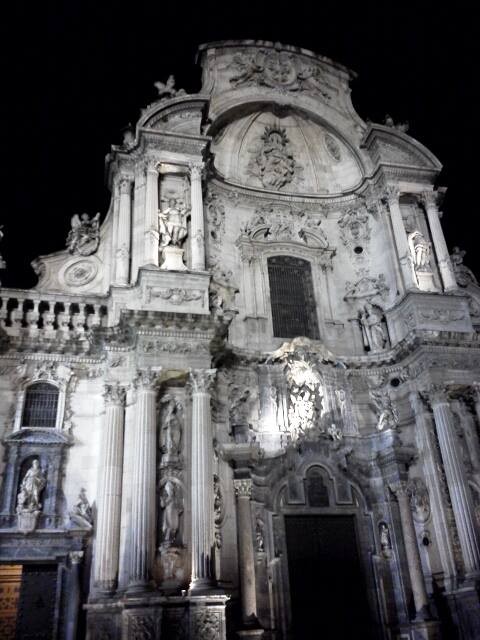 In the 14th century, they started to change parts of the cathedral. First they built the cloister; they had to destroy part of the mosque in order to do this, however if you want to see the original foundation, there is a display at the museum. Years later, they began the construction of the cathedral that we know today. Over the following centuries, the Tower of Campanario, the Vélez Chapel, the Junterón Chapel, the Door of Chains, and the new main façade were added to the complex. It is because of this that the Cathedral has a great range of styles as many of the more prominent parts of the cathedral were made by artists from all different eras. The wide variation of styles in my opinion make it more beautiful and unique; a treasure for the city of Murcia.

The old, unstable façade was replaced during the 18th century by the new one that faces the Plaza del Cardenal Belluga that we see today. Without a doubt, it's very beautiful, and is the work of the architect Jaime Bort. It's dedicated to the Virgin Mary although there are some features dedicated to other saints too. When looking at the front of the façade, you can see two horizontal and three vertical parts, and it has three doors, with the central one being the largest. This is called the Door of Forgiveness, and can only be opened on very special occasions, like the annual celebration of the Virgin of Fuensanta. Therefore to enter the Cathedral you need to use the two other front doors, or the door on la calle Trapería. The middle of the façade is the biggest part and as it's also finished with an arch at the top, it stands out even more. 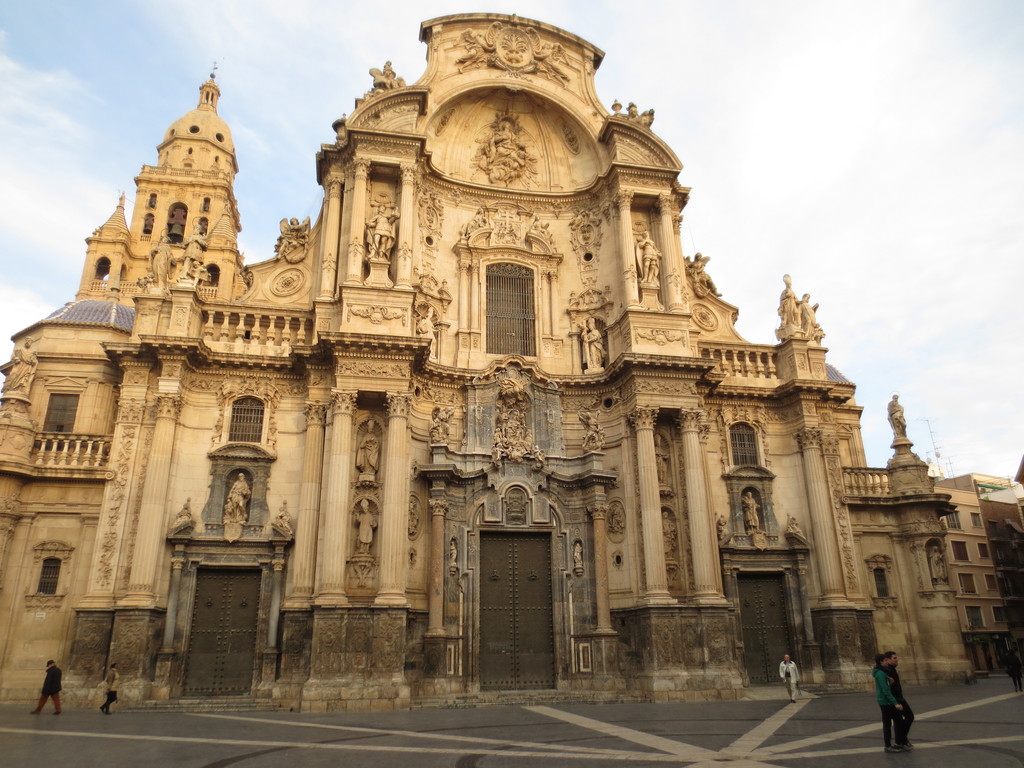 The bell tower is 305 ft tall and is the second tallest cathedral tower in Spain, after the Giralda in Seville. It took more than two centuries to finish it, which is why there are 5 different 'parts' of the tower. The clock is on the third part of the tower but the fourth and fifth parts are my favourites as they have a great amount of detail and also hold the bells... which I have heard many, many times! Like in other cathedrals, you can go up to the bell tower, which costs 5€, but they do have discounts for children, students, and senior citizens. Although I've always wanted to, I've not actually been to the the bell tower yet, but I will do one day, as I imagine the views to be spectacular. 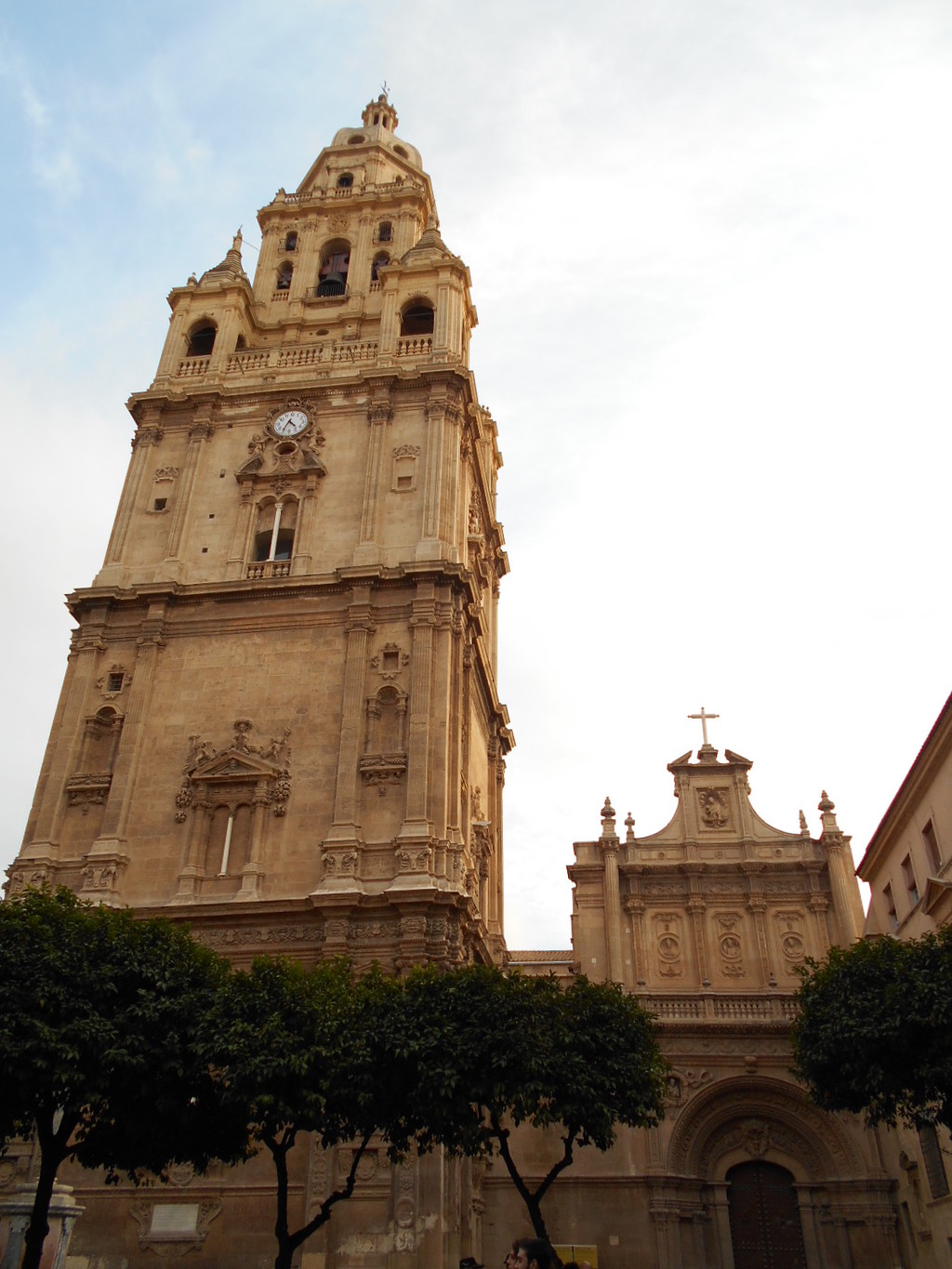 The other really famous exterior part of the cathedral is called the Door of Chains which is on a small square, just in front of calle Trapería. In this square there's a cross surrounded by chains, hence the name. It's not very beautiful by itself, but combined with the bell tower, it's really something else. 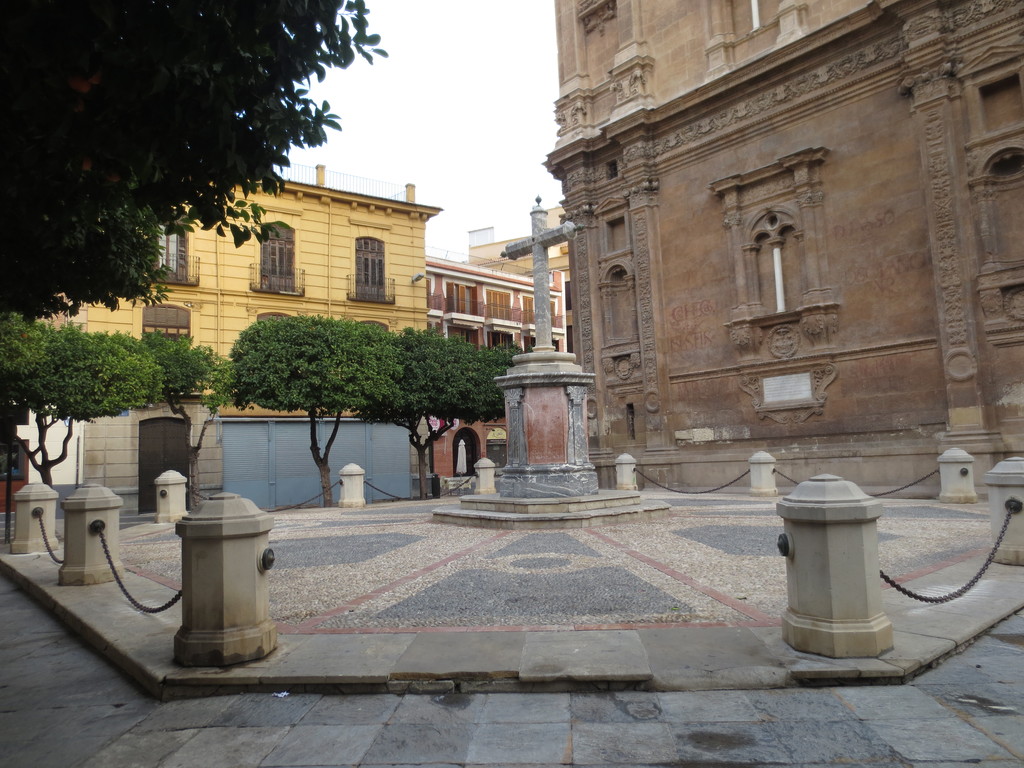 On the opposite side is the Door of Apostles. You're immediately drawn to the outlined rose window and the apostles either side of the door. The door is finished in the shape of an arch, which contrasts the straight walls. I don't like it as I don't think it's very harmonious. 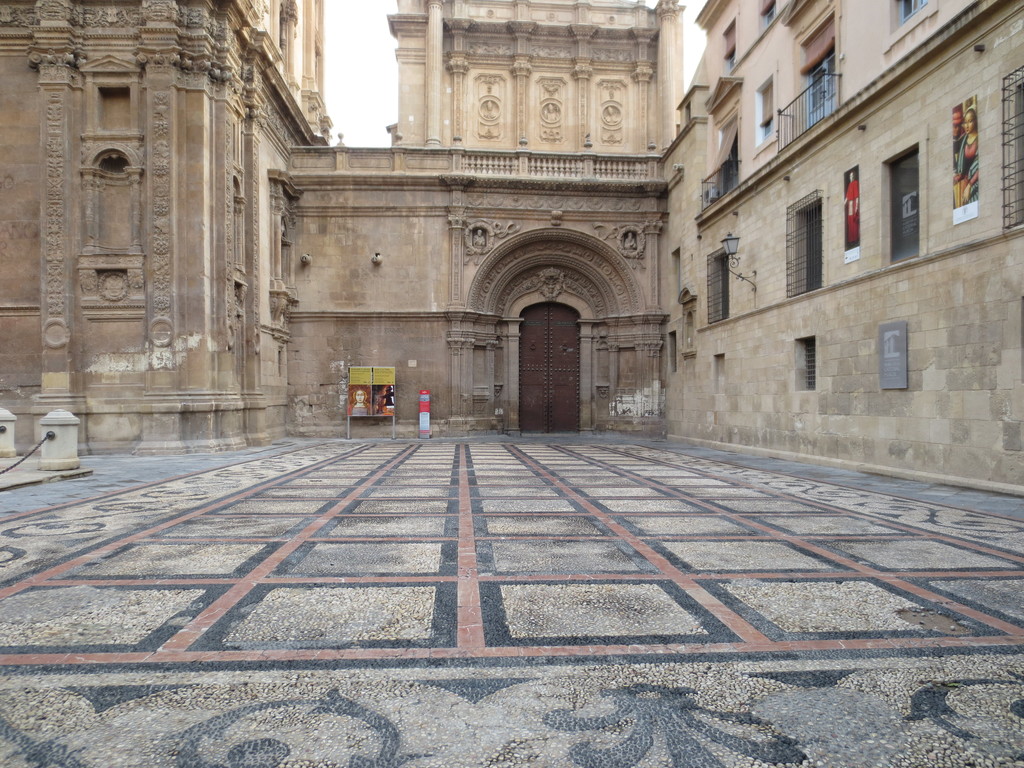 The other important part of the Cathedral's exterior is the Vélez Chapel, which is as beautiful outside as it is inside. The most interesting and popular feature amongst the city's residents are the stone sculpted chains that go around the chapel. It has 90 links, and is so well known because of the legend of its architect. The legend says that the chains were built by a beggar who bragged to the Marquis of Vélez that he was a great sculptor and that he would make the chains in exchange for asylum. He was told that if the Marquis didn't like it then he would die, and if he did like it then he would live a peaceful life. When the sculptor had finished everybody was surprised by the great work of art he'd created. The sculptor later decided to move on to somewhere else, but in fear of him producing more beautiful work for another land, his hands were cut off so that he couldn't ever build another, and his tongue was cut off so that he couldn't ever tell anyone how to make it. I'm not sure how factual the story is, but it's definitely very well known! 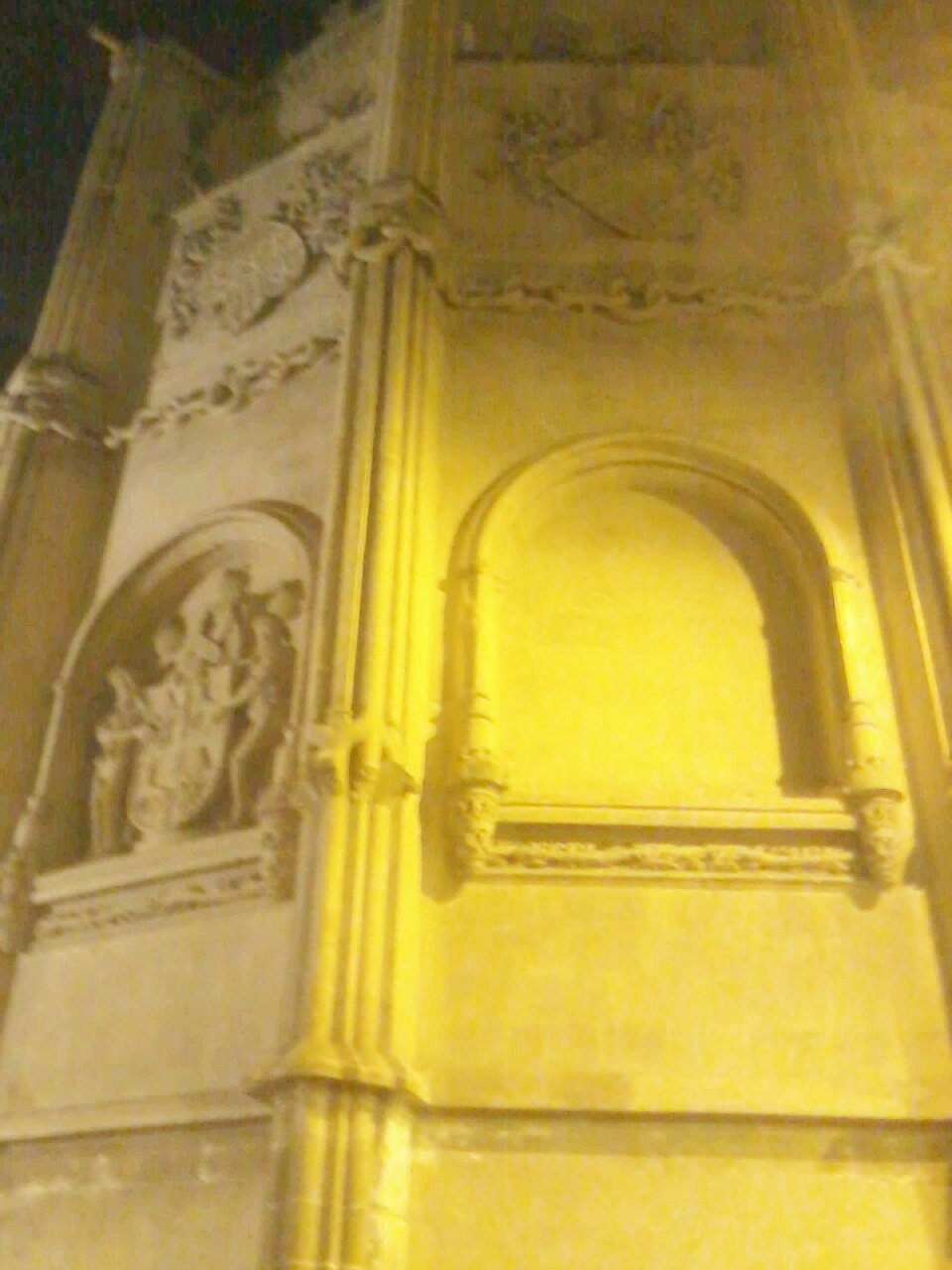 Now, I shall explain the Cathedral's equally as spectacular interior. Here is a brief description (there's quite a few) of all the chapels in chronological order when you enter the Cathedral and turn right.

Juan Navarro painted the picture of the Saint that you can see. Cardinal Belluga dispatched the Santa Paz piece from Rome, which sits above the painting in the altarpiece. It's very small and not very appealing. 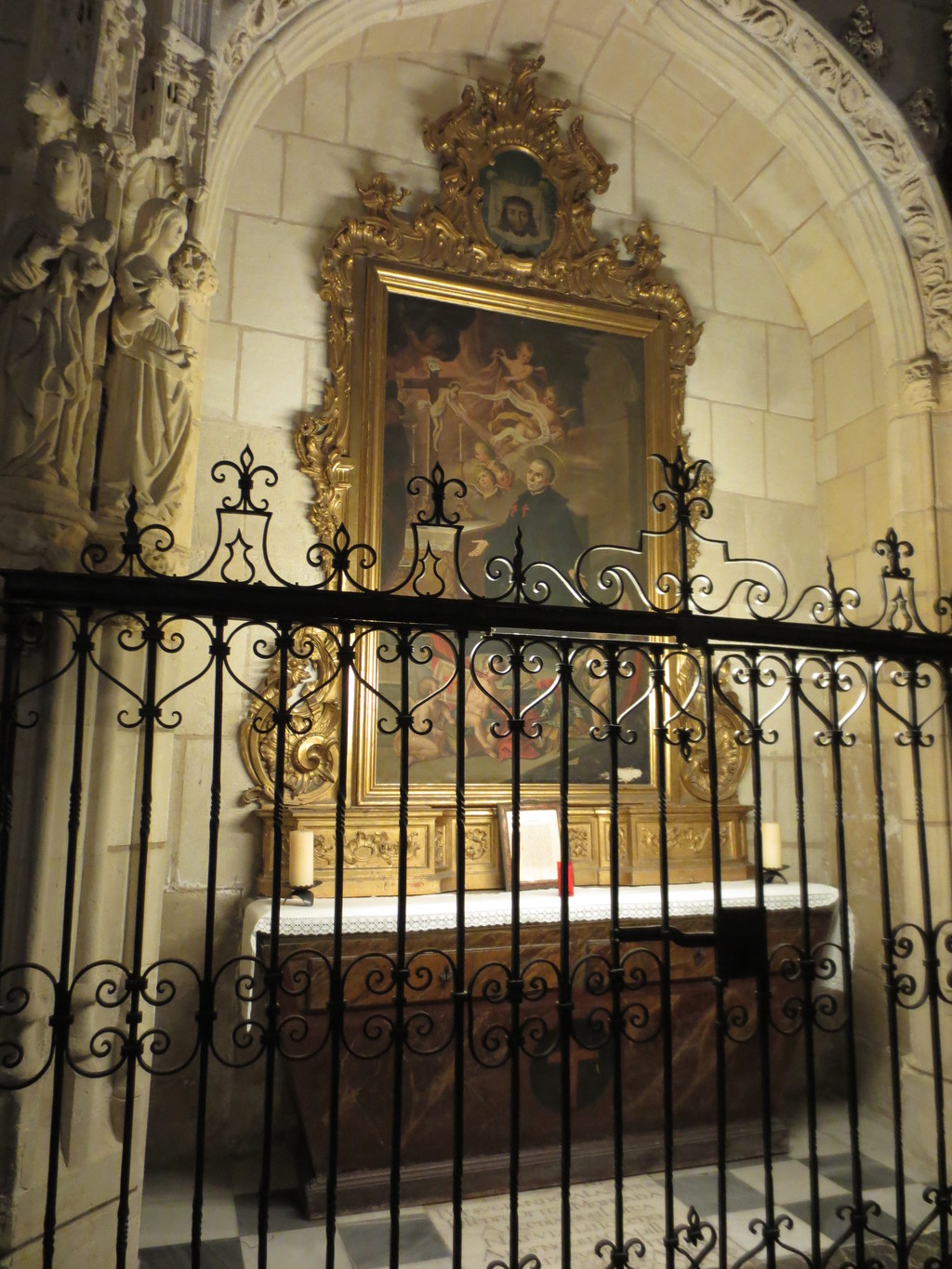 Established by Don Martín de la Selva at the end of the 15th century. 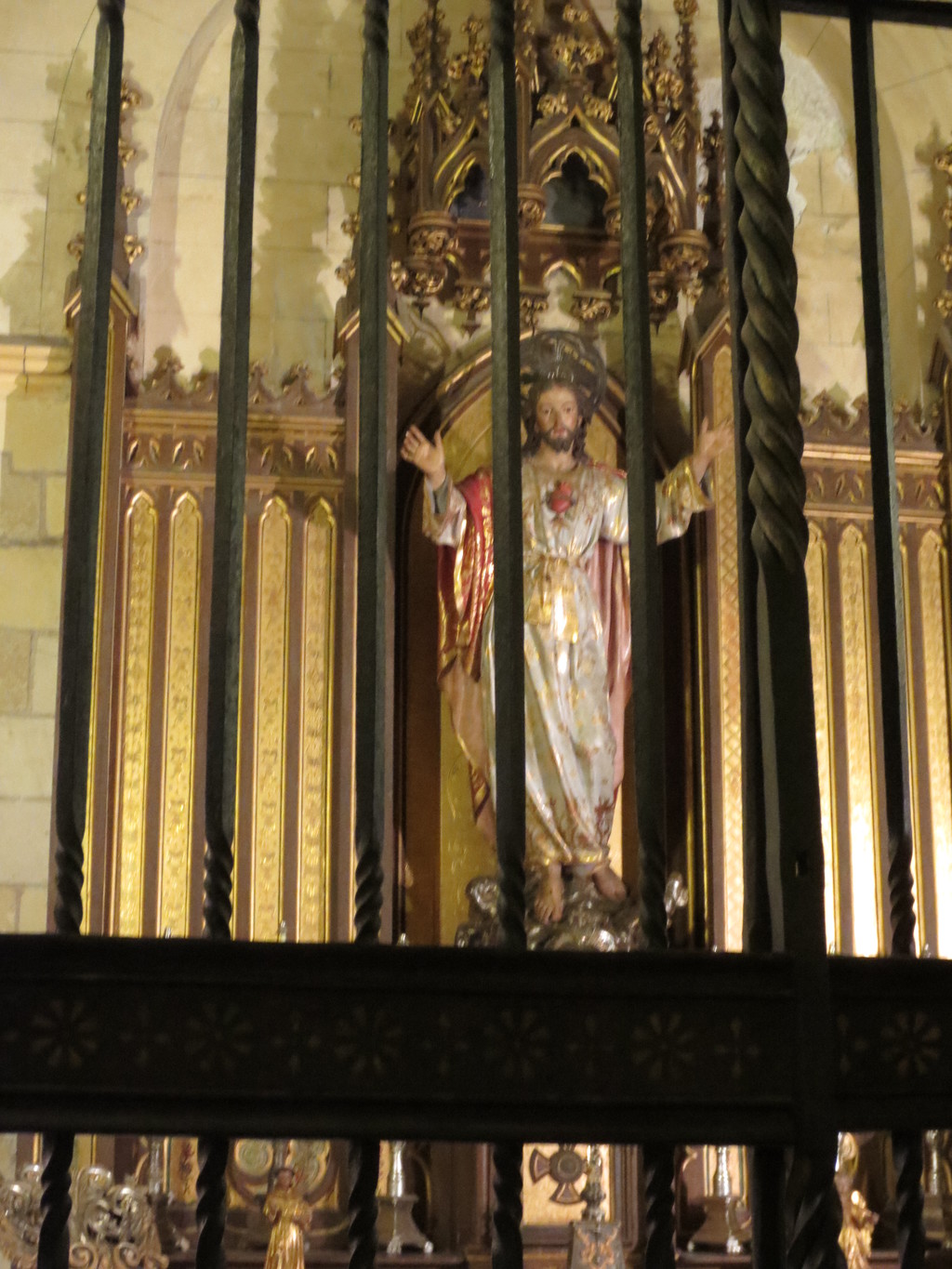 In this Gothic style painting, you can see Christ hung on the Cross in the Prayer Garden being whipped. The altarpiece materials are of high quality and the brown and green colours are a striking contrast against the white walls. 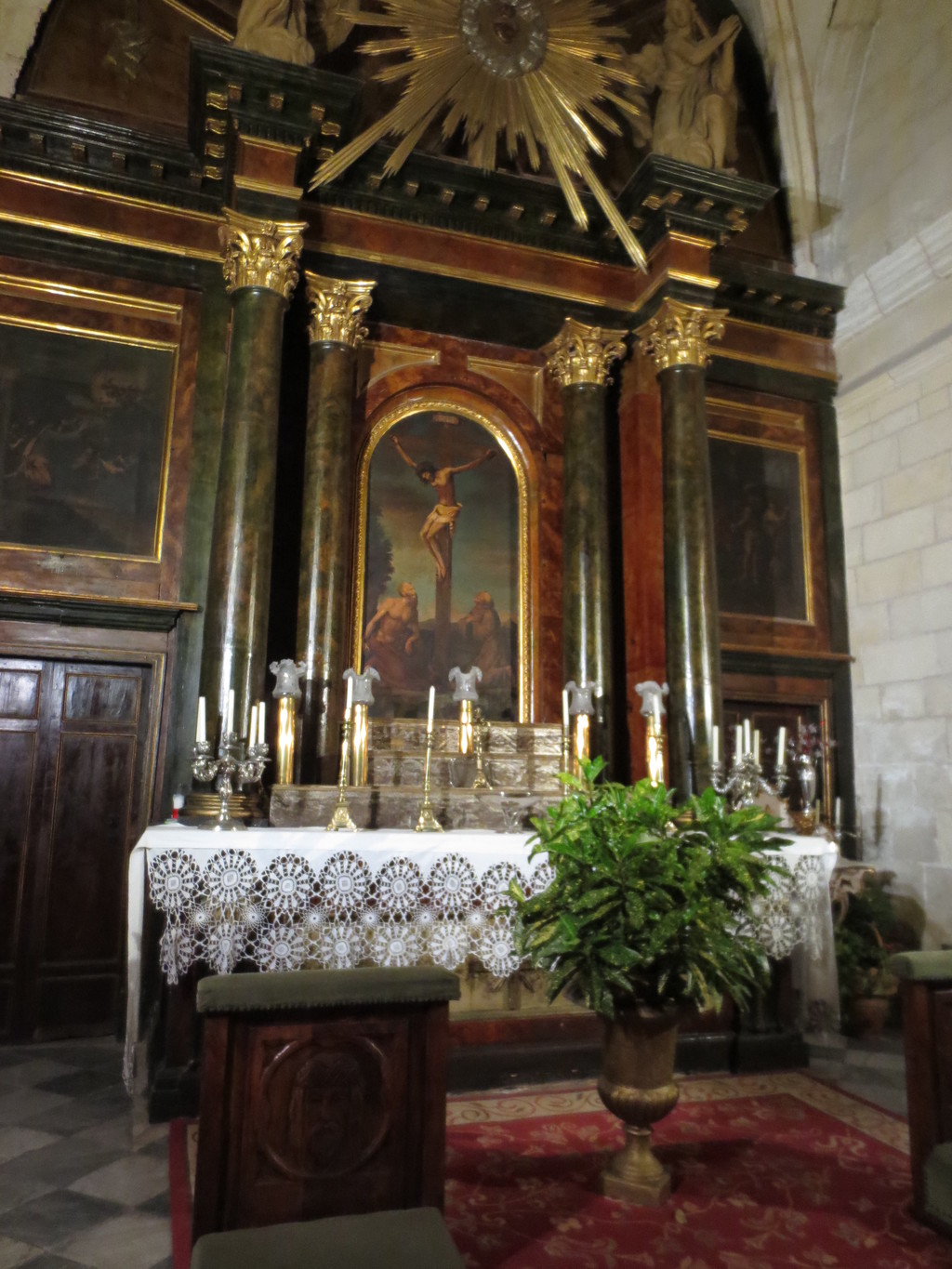 Continuing from my description of the outside of this Chapel, I shall now describe the inside. This Gothic styled work of art is dedicated to St. Lucas and at the risk of repetition, I won't say anything more than that it really is just beautiful. 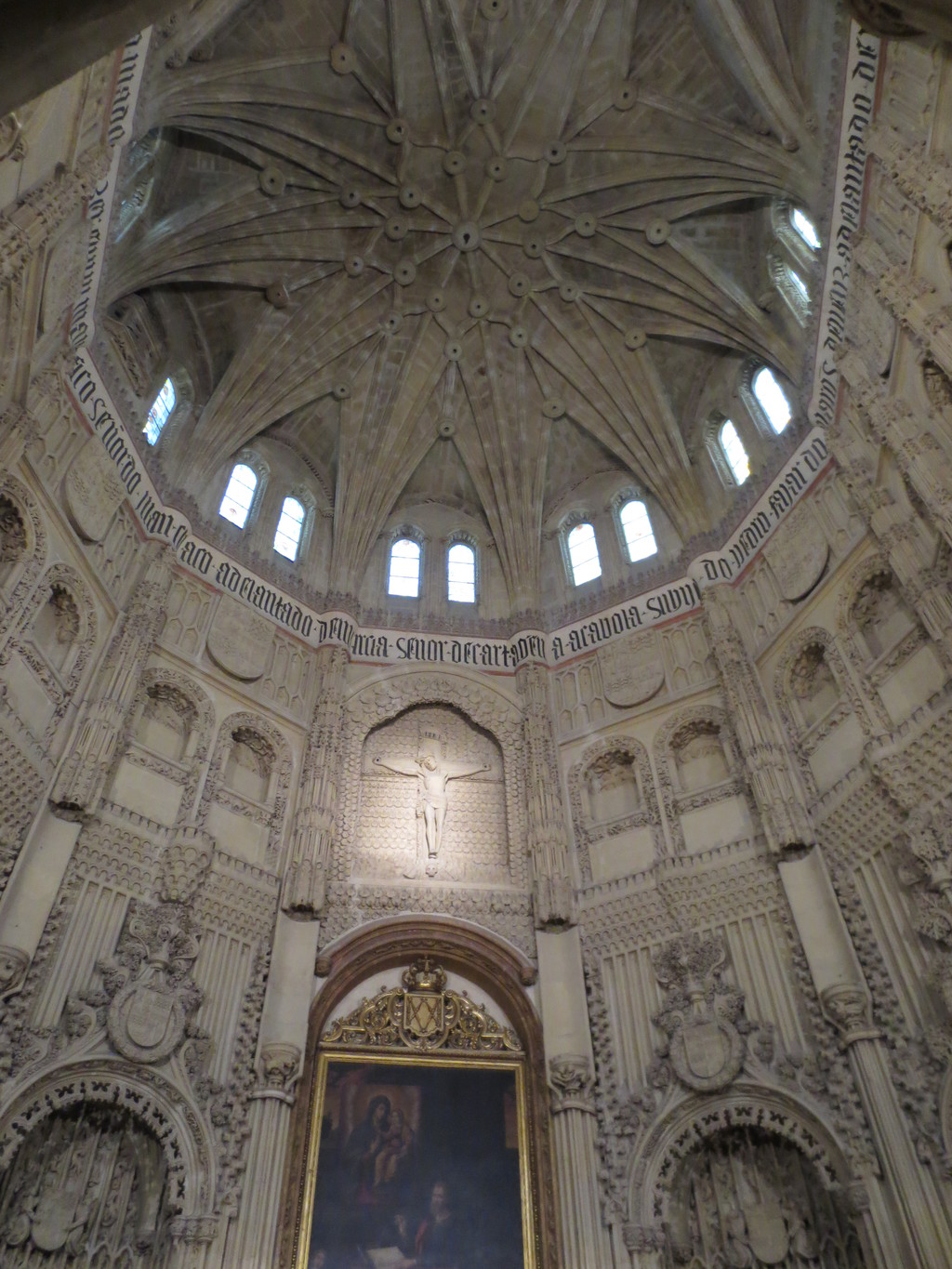 It's the Cathedral's most important chapel and one of the most expensive, due to the Marquis of Vélez and his family who had a high buying power at the time. It has since been declared a National Monument for its artistic value. When I walk through the aisle, my eyes just go directly towards this chapel; it really grabs your attention. I honestly love the inside just as much as the outside. 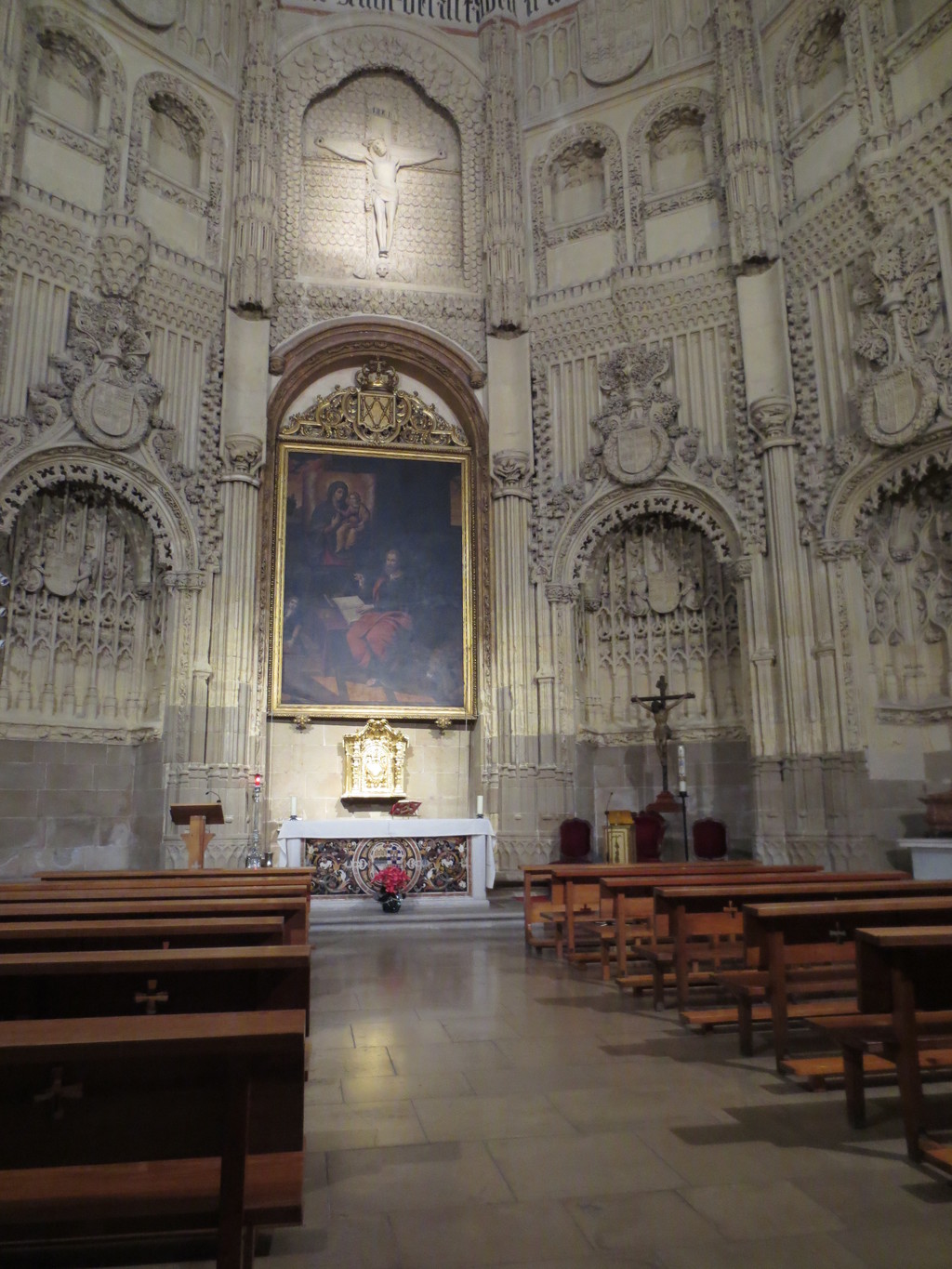 This is the Cathedral's oldest chapel, founded by Bishop Pedrosa in 1388, who was also buried there in 1402. It's Gothic style and the picture of St. Antonio is the work of Salzillo. 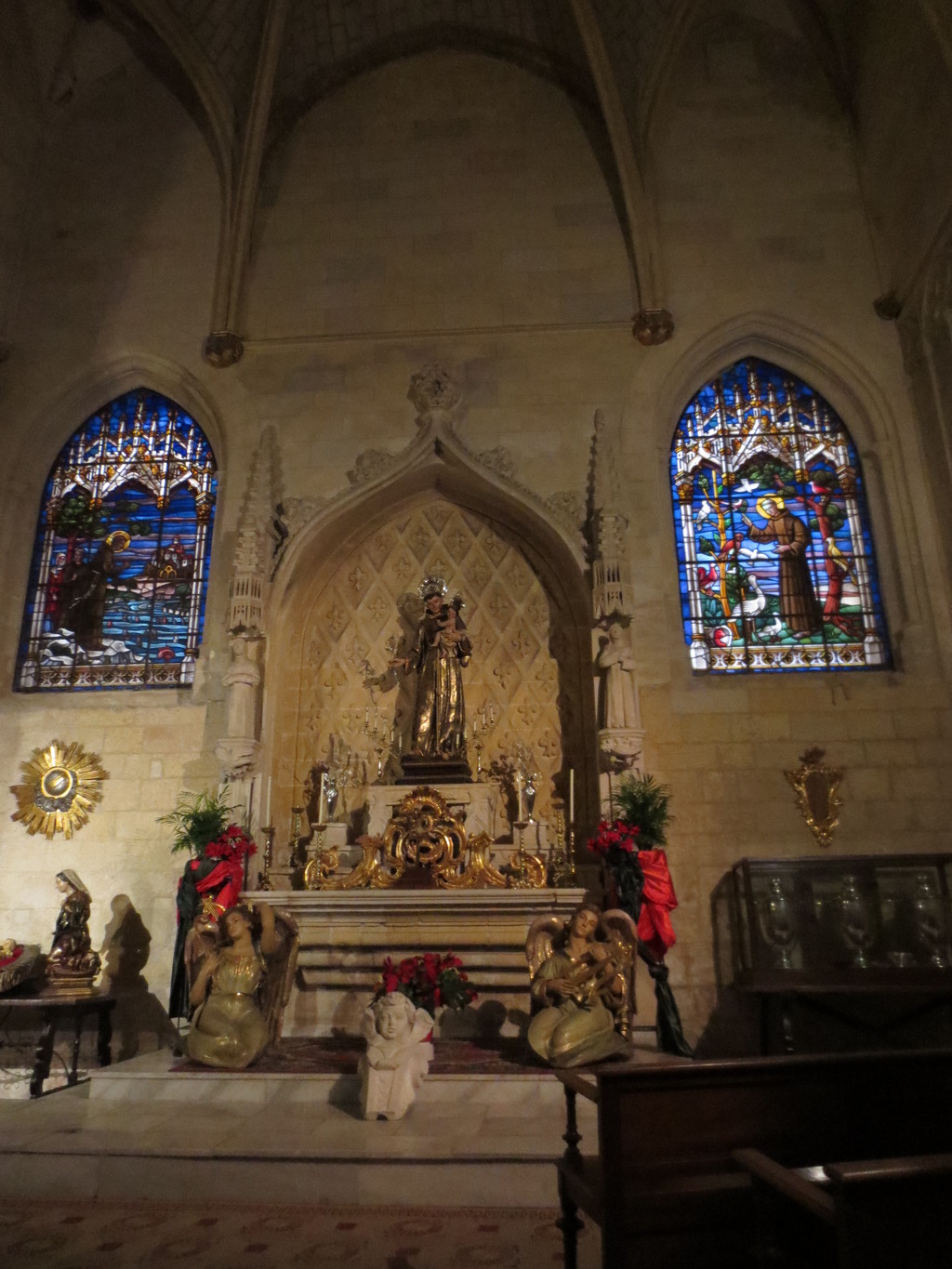 The front of the altar is Rococo style, whereas the rest is Gothic. I quite like the altarpiece, and the relief of San Antonio Abad. This is also Salzillo's work.

This chapel contains a sculpture of the Virgin of Pilar, to whom the chapel is dedicated, with two angels at her side; this is where the Bishop Don Diego de Comontes is buried. On the back wall is a picture of the Eternal Father. 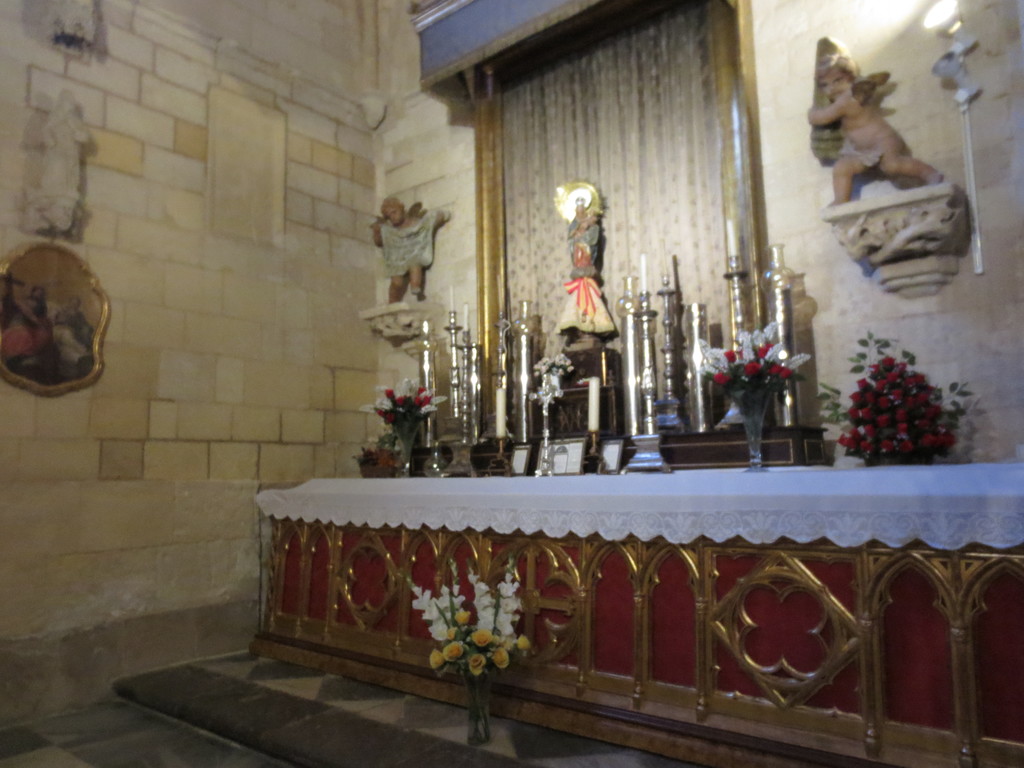 It's of Gothic style, very small, and has practically no decoration. The painter of the San Francisco picture is unknown.

Here in this neoclassic chapel you will find a sculpture of the Virgin of Solitude and the sepulchre of the Bishop Landeira.

There's a small altarpiece in the centre of this Renaissance chapel, and there are distinctive characters in the interior, but the main one is Jesus of Nazareth. 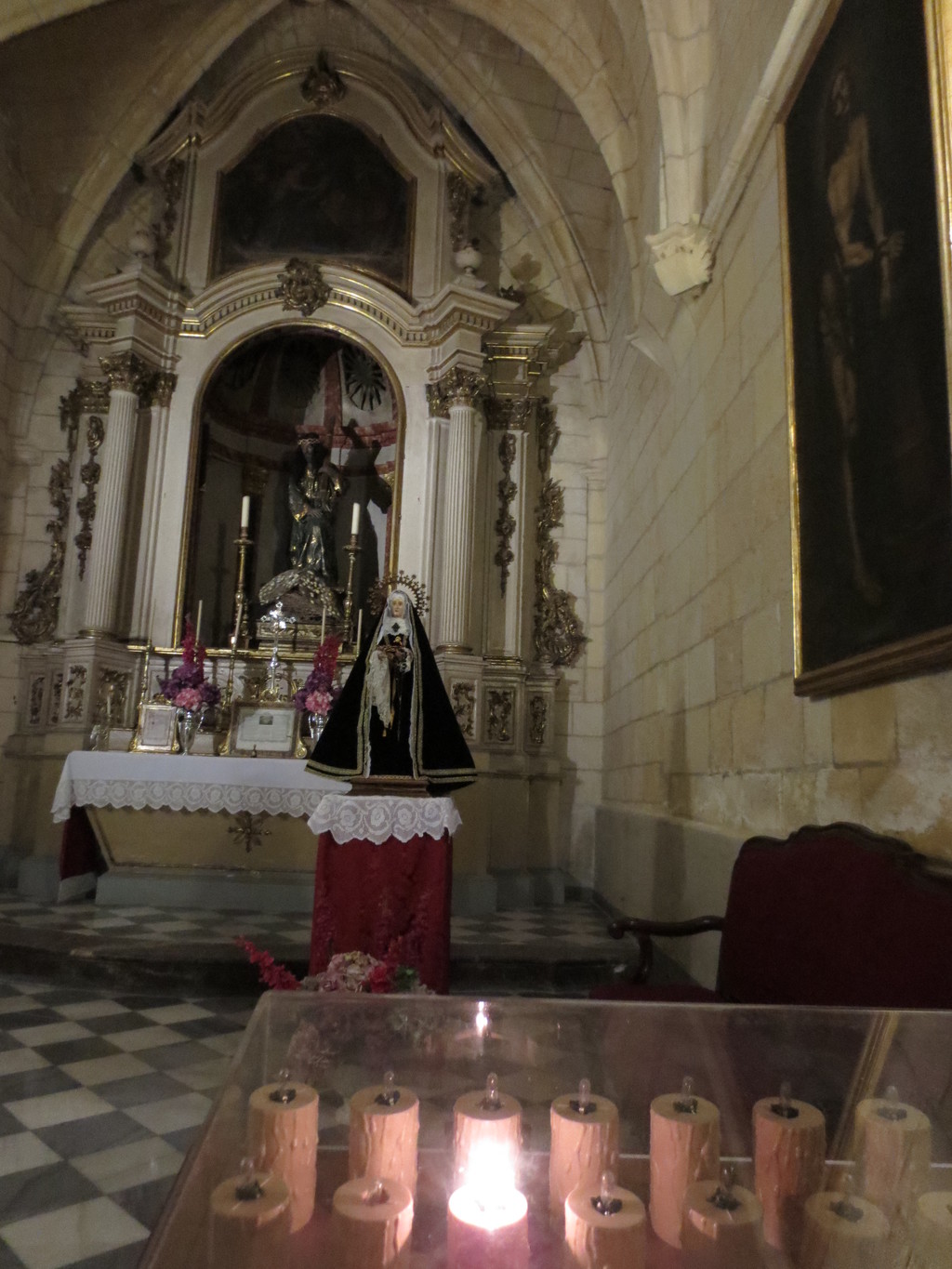 There's a painting of St. Bárbara in the centre and two sculptures of St. Pablo and St. Pedro either side of it. 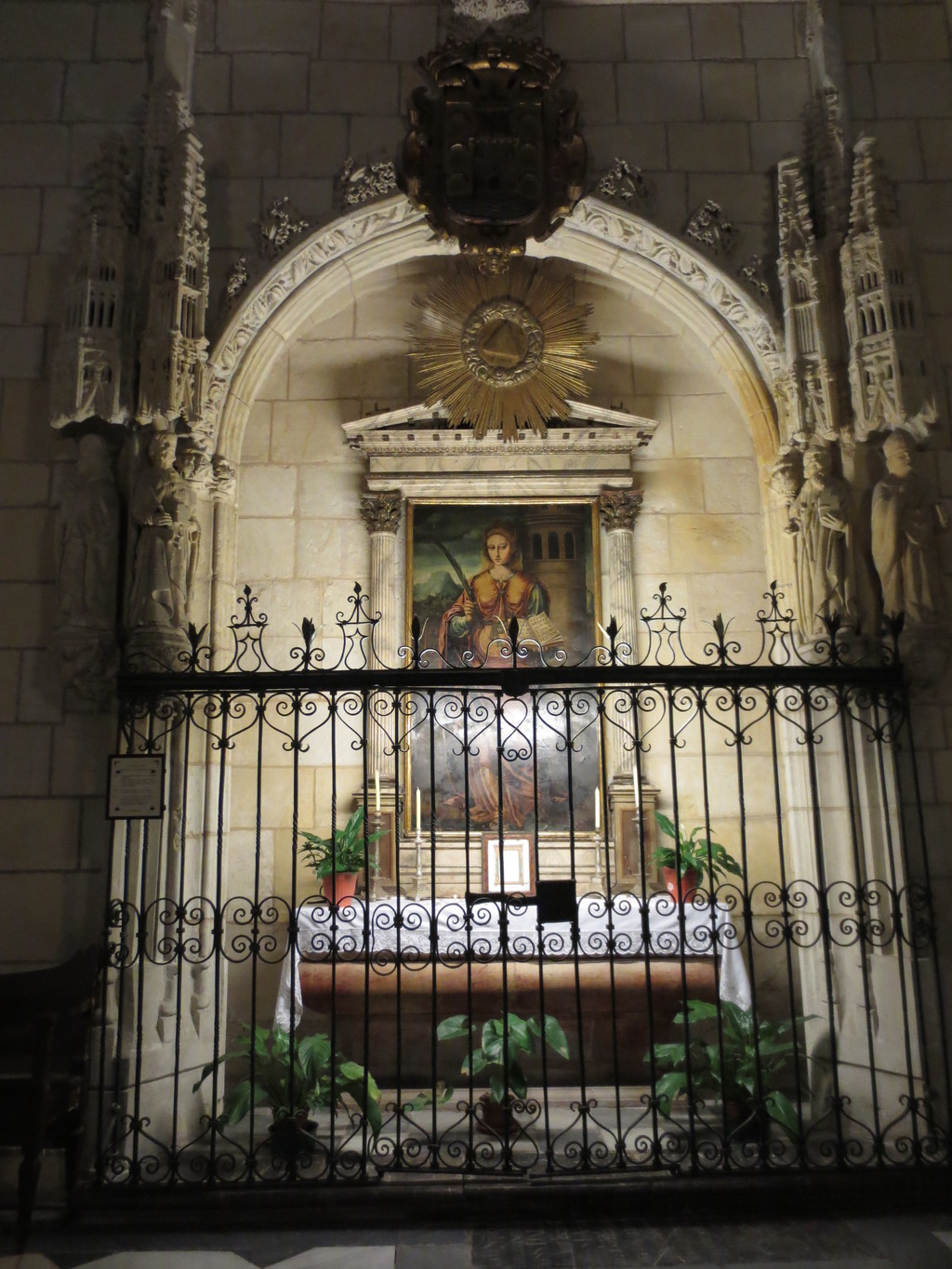 As indicated by the name, the chapel is sponsored by the archdeacon Gil Rodríguez de Junterón. The most striking element in this Renaissance masterpiece is that it's made from stone and marble. Also, written on the floor are the following words "Life stops here".

This is where you'll find the cathedral's greatest altarpiece and also the urn that holds the heart and entrails of King Alfonso X 'The Wise', which is protected by a Gothic gate. The gold altarpiece has always grabbed my attention, and it's usually where the priest performs Mass, although for a cathedral, I think the space available for people to sit and listen to Mass is really small. It fills me with pride to think that King Alfonso X chose Murcia as the place to leave his entrails when he died (he wanted to leave his heart somewhere else but they didn't respect his decision), as this shows the great love and dedication that he had for the city. Just underneath the urn is the inscription that says:

"Here lies the entrails of Lord King Alfonso X: who died fighting for the loyalty of Murcia in Seville, and it is this loyal adversity that demands the burying of the King here". 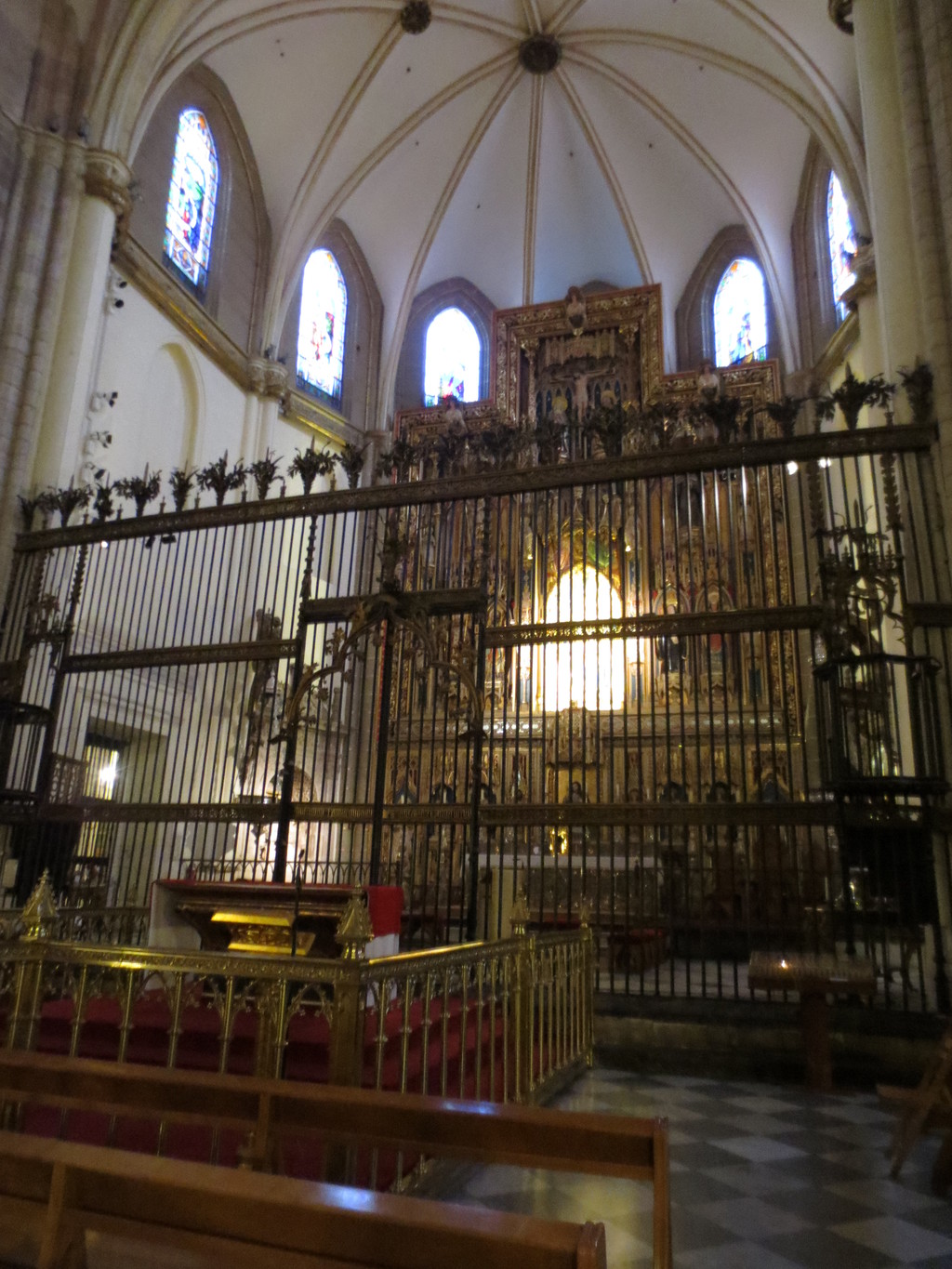 One of the cathedral's most treasured feature. On one side of the room, you can see the set of late Renaissance chairs that Queen Isabel II gave to the choir as a gift, after the fire destroyed the previous set, as well as the main altar at the time. There is also an incredible, neogothic, prestigious Merklin-Schütze organ, with a double facade, and is is one of the most valuable organs in Spain. 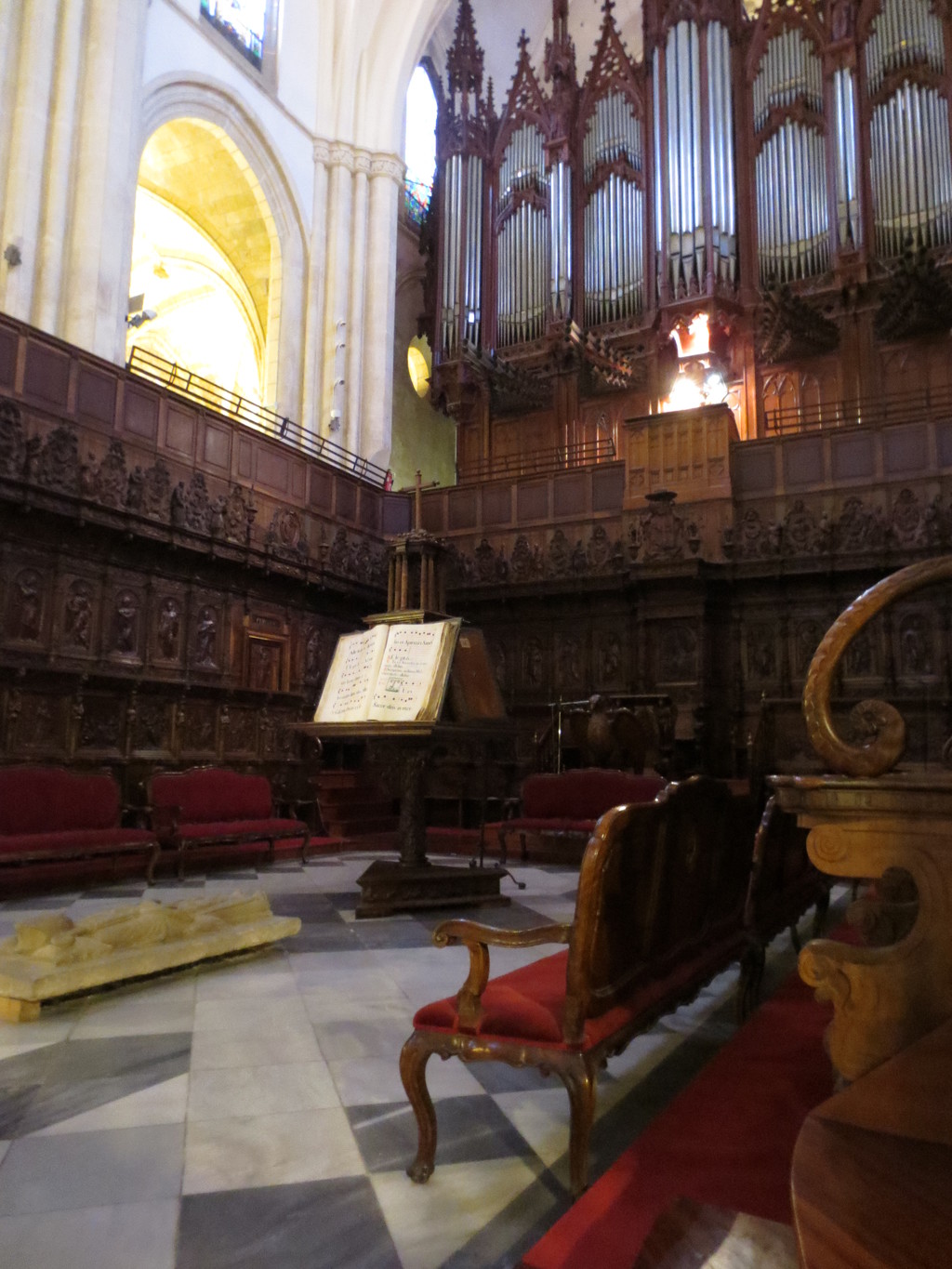 I've actually been lucky enough to be able to sit on the choir stalls during Corpus Christi, which for those who don't know, is a day that celebrates the Eucharist and where children who have done communion that year take part in traditional ceremonies and parade the streets. I was eight when I did it, so I can't remember every detail, but I do remember how excited I was to sit in the choir stalls! I'd seen them so many times when I'd visited the cathedral and had never ever seen anybody go inside! I also remember the sound of the organ, the music; I can still hear it in my head.

Along with the Vélez Chapel and the Junterones Chapel tomb, the choir stalls and organ are my favourites things about the inside of the cathedral.

On the other side, there is a place to leave alms, to donate, like there is in most churches. However, I was surprised to see a sign saying "All the donations collected in this mite box will go to providing mass for all the souls in Purgatory. Remember yours. " I respect region, but the message didn't seem appropriate, and I saw it as out-dated and threatening. 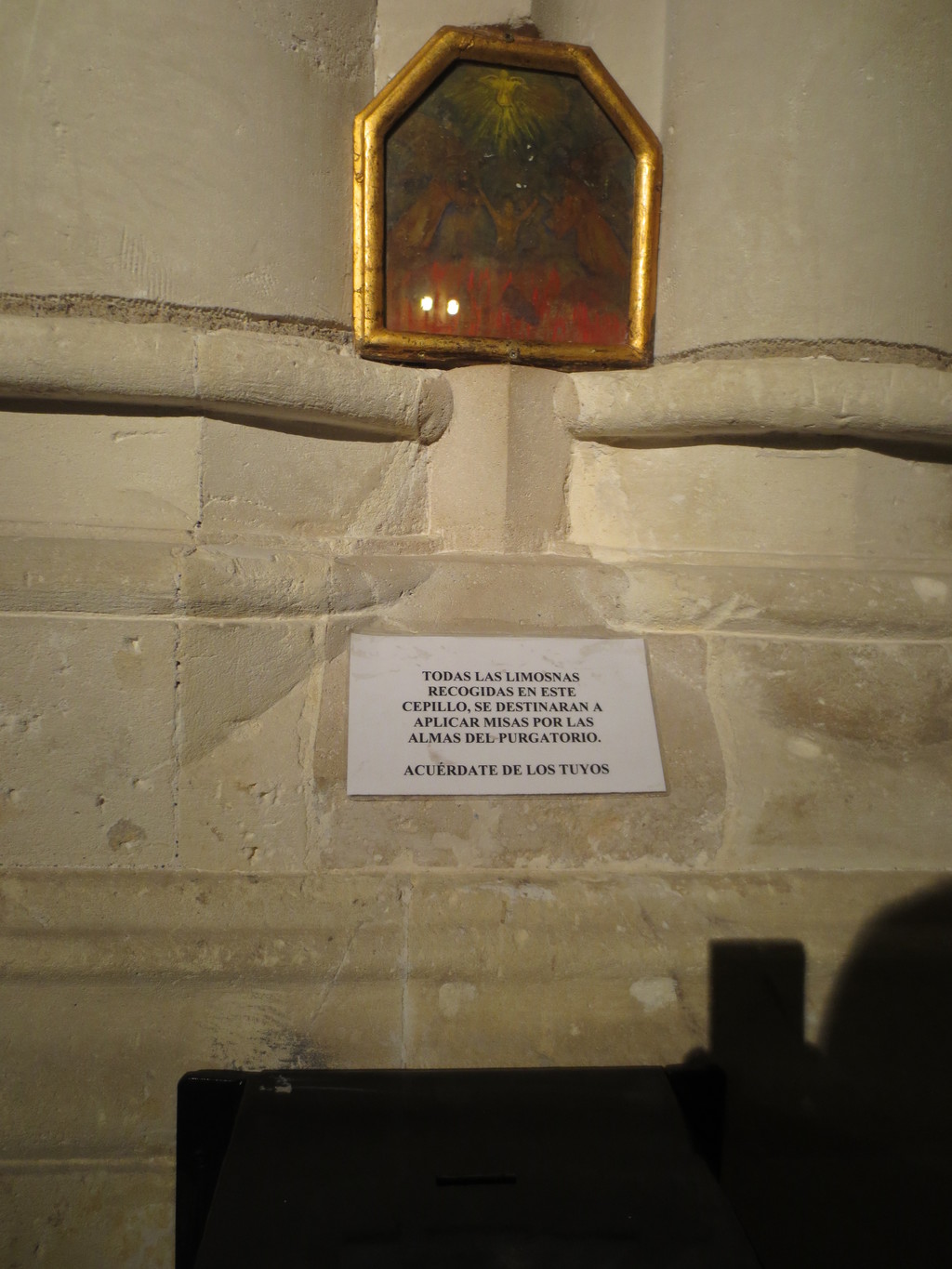 You can actually get married in Murcia Cathedral! I think it would be the best place to have a wedding, but the waiting list is extremely long.

As somebody from Murcia, I feel proud of this cathedral and feel lucky that my Erasmus friends from places like Japan and Taiwan also share my opinion and liked it a lot. 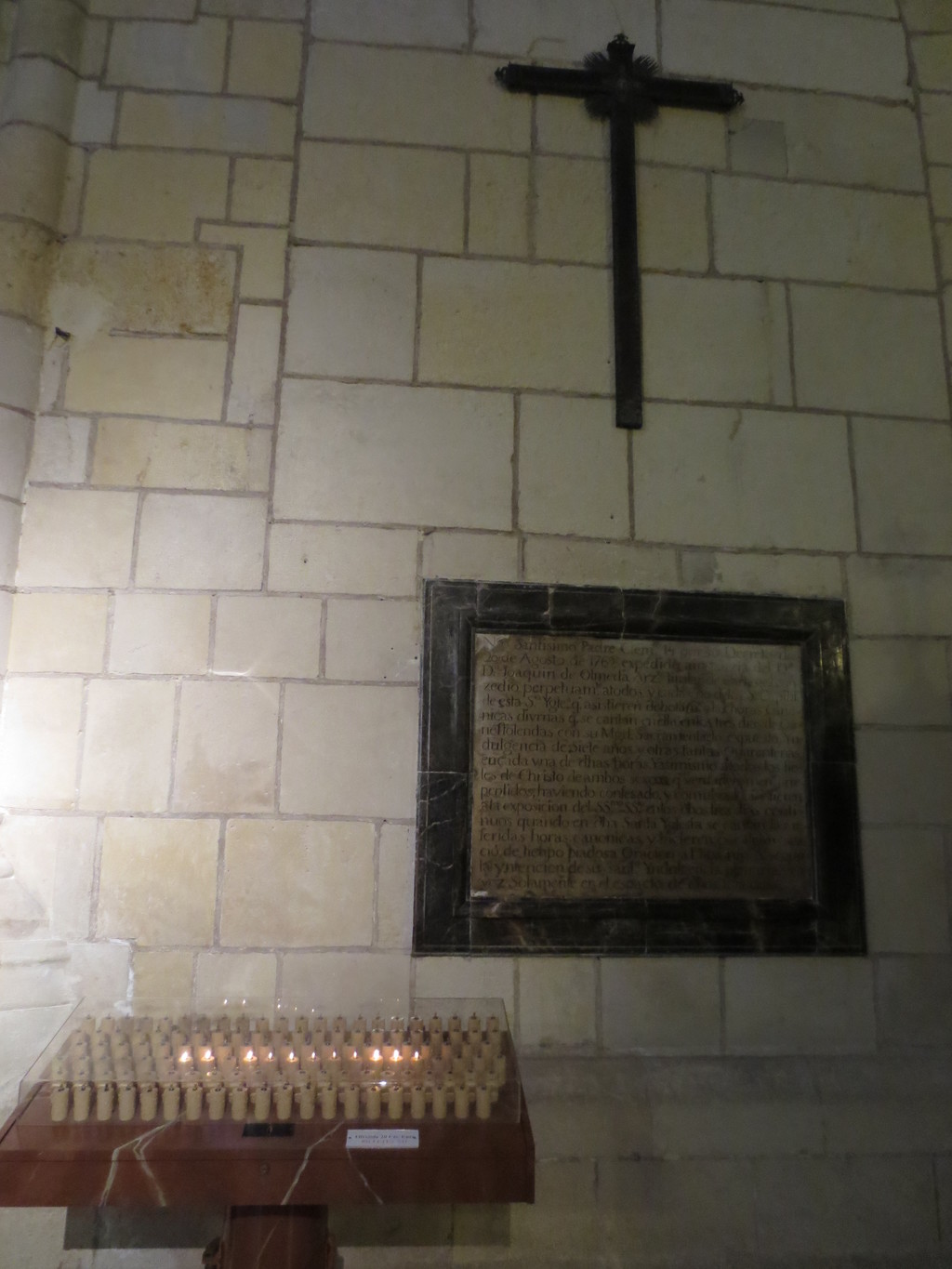 Do you know Murcia Cathedral? Share your opinion about this place.