Glorieta Square | What to see in Murcia

La Glorieta de España, otherwise known as the Glorieta or Paseo de la Glorieta, is one of the most important, famous and beautiful public squares in Murcia. It can be found in the old town, next to the Segura river, separated by a road, and, is very close by to Cardenal Belluga square, where Murcia cathedral is, linked by Arenal street.

It's a pedestrianised square, elongated in shape and with flower beds. It has two important buildings: the Town Hall or Council building and the Episcopal Palace.

Of these buildings, I'm just going to talk about the city council hall, as I spoke about the Episcopal Palace in another post, of which the façade that overlooks the Glorieta is not the main one, that one is in the back, in Plaza del Cardenal Belluga. 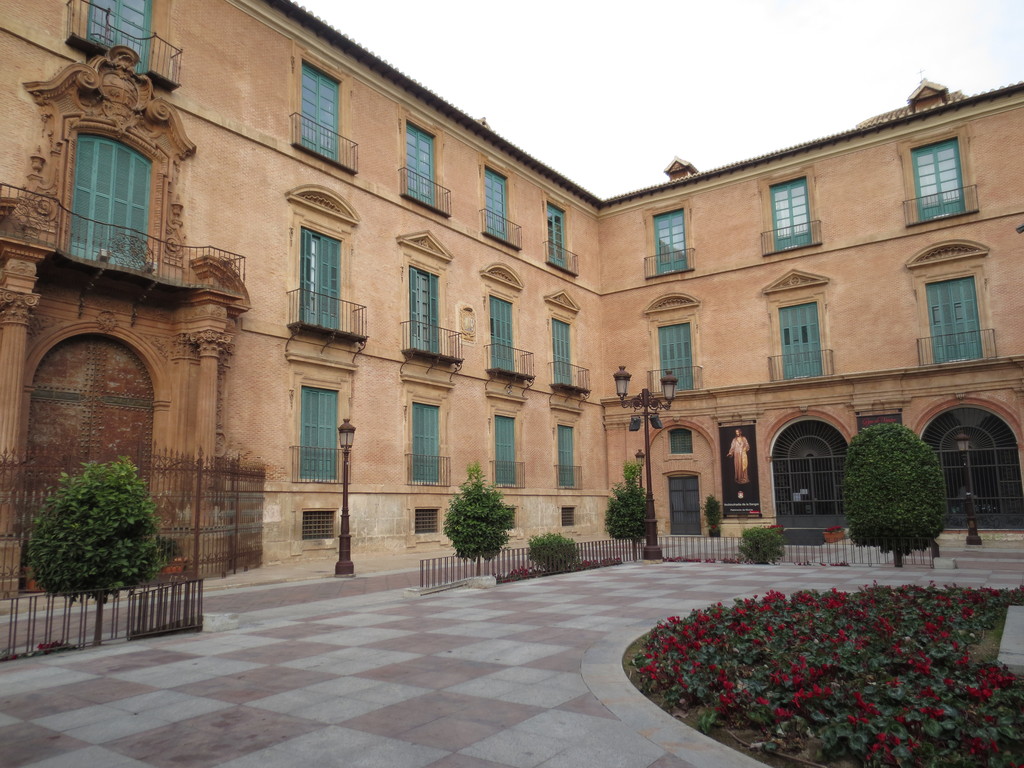 The Town Hall, better known as Murcia Town Hall, was designed by Juan José Belmonte and was unveiled in 1848. It is build in the Neoclassical style, and on its façade four columns stand out, which are located in the centre of the building and cover floors one and two; and, they support a triangular pediment. Among the columns is the main balcony, which gives it even more prominence; and, right between the two central columns is the shield of Murcia, with a muse on each side. In the centre of the pediment is a clock, salmon-coloured, whilst the columns and other details are beige; I love this colour combination. 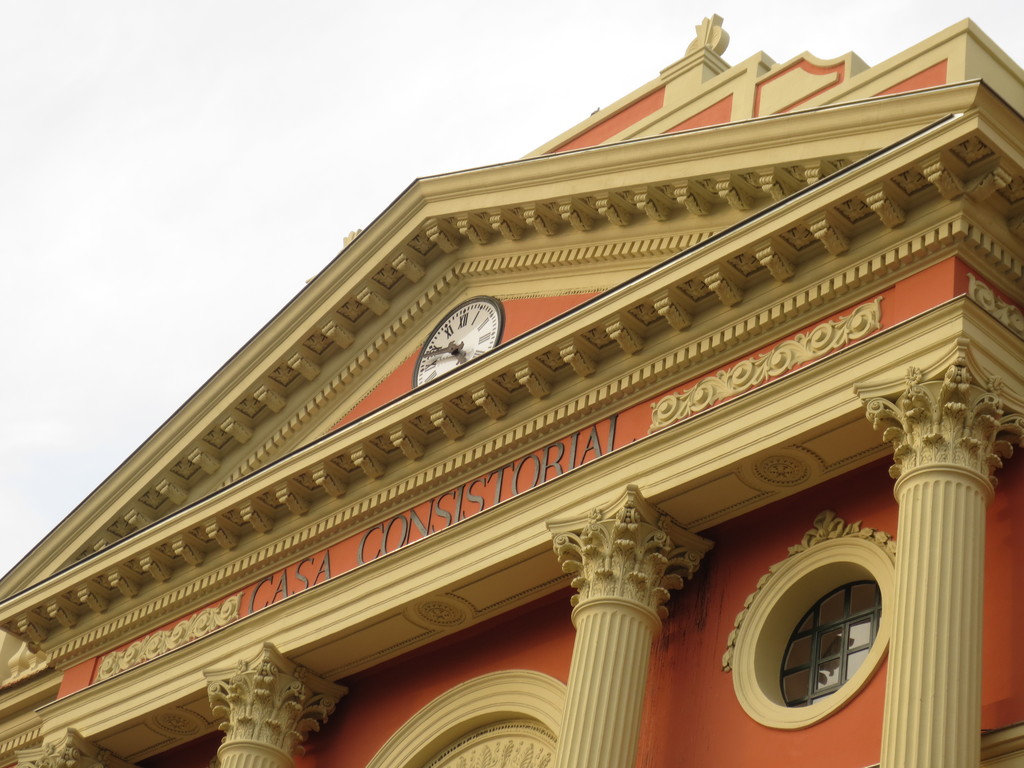 In addition to this, there are many windows spread out across the building. 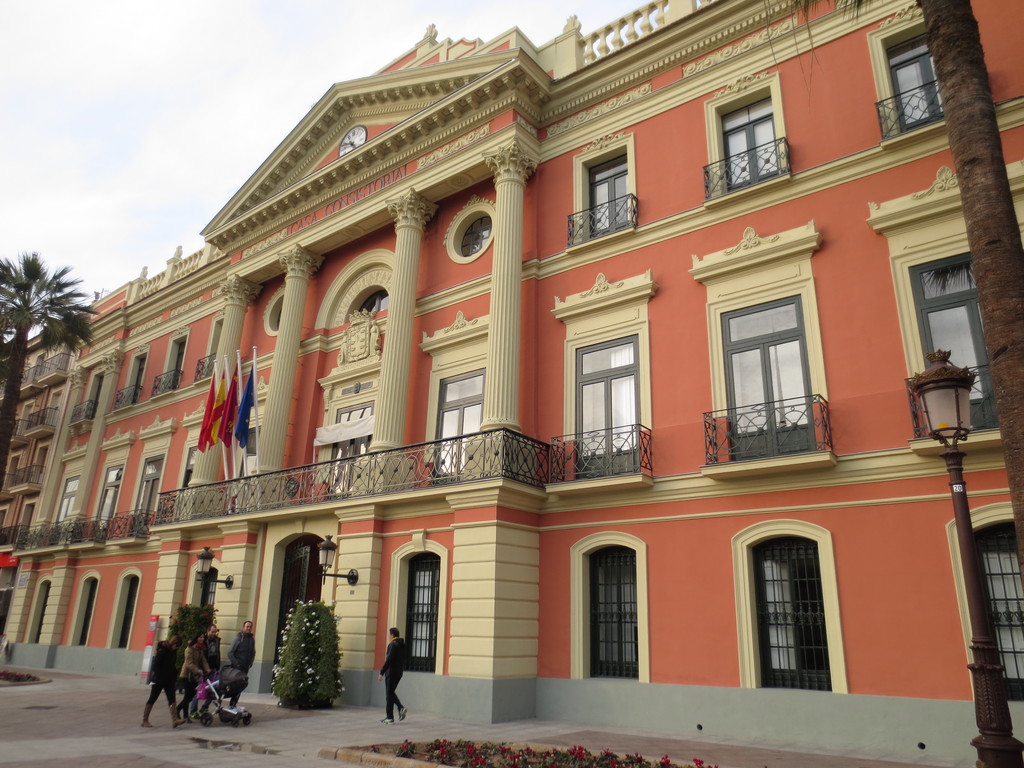 The interior is surely beautiful and very elegant, I've only seen the reception and the impression I got was one of beauty and elegance, with the famous marble staircase. As in all places of political importance, you can't forget the flags, there are four here, one for Murcia, another for the region of Murcia, another for Spain, and one for the European Union. 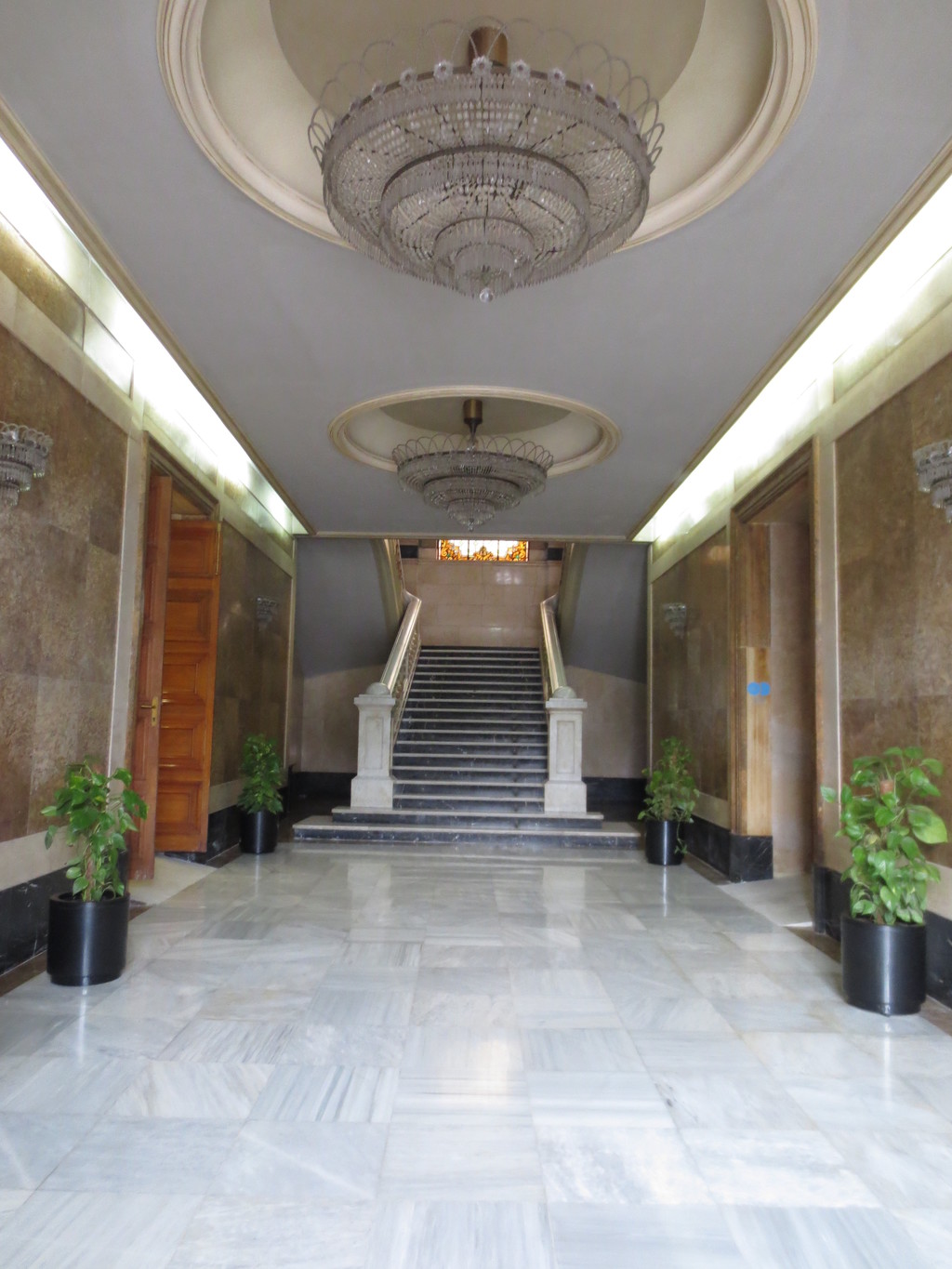 Murcia town hall has an annexe building, found in Cardenal Belluga square, which is one of my favourite buildings in Murcia. It's built in a contemporary style and was opened less than 20 years ago. The façade is rectangular and made up of open squares. It's best to see it by night, when it's really lit up and the open parts of the façade are illuminated in bright colours. Being a very modern building, it provides a huge contrast against Murcia cathedral, and although they are stand face to face, I think they complement one another perfectly which is why this place is deserving of admiration. 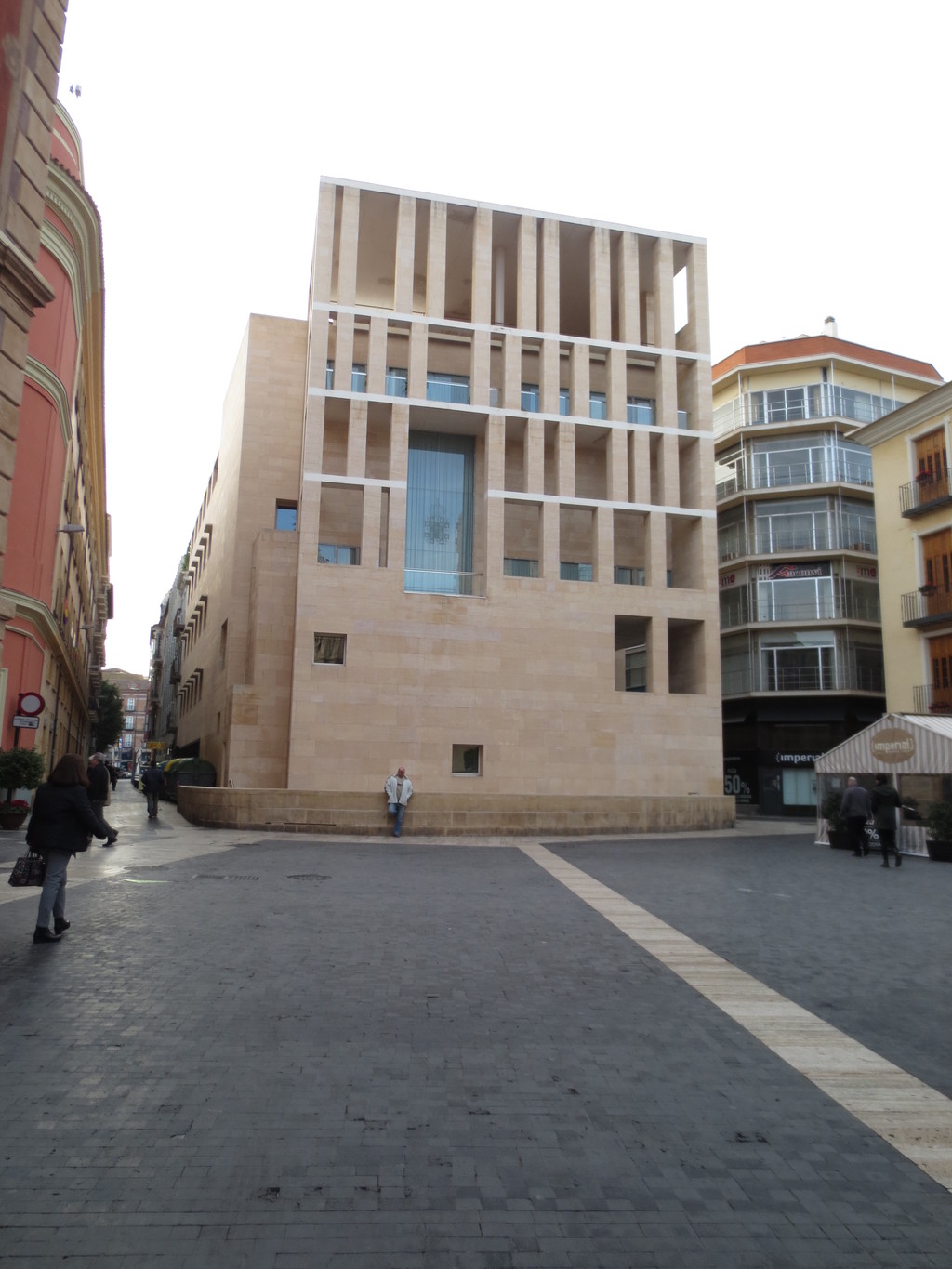 Aside from these buildings, this area is also noted for its sculptures.

The statue of Cardenal Belluga (who was an important bishop of the Cartagena Diocisis), is the most recognised, and the strange thing is that there is nowhere in the square where his name is displayed. The statue is located right in front of the rear facade of the Episcopal Palace, and looks towards the fountains. The statue is made of bronze, and depicts Cardinal Belluga kneeling on one leg, with a parchment in one hand, and a sword in the other. You can also see a cross hanging on his neck. 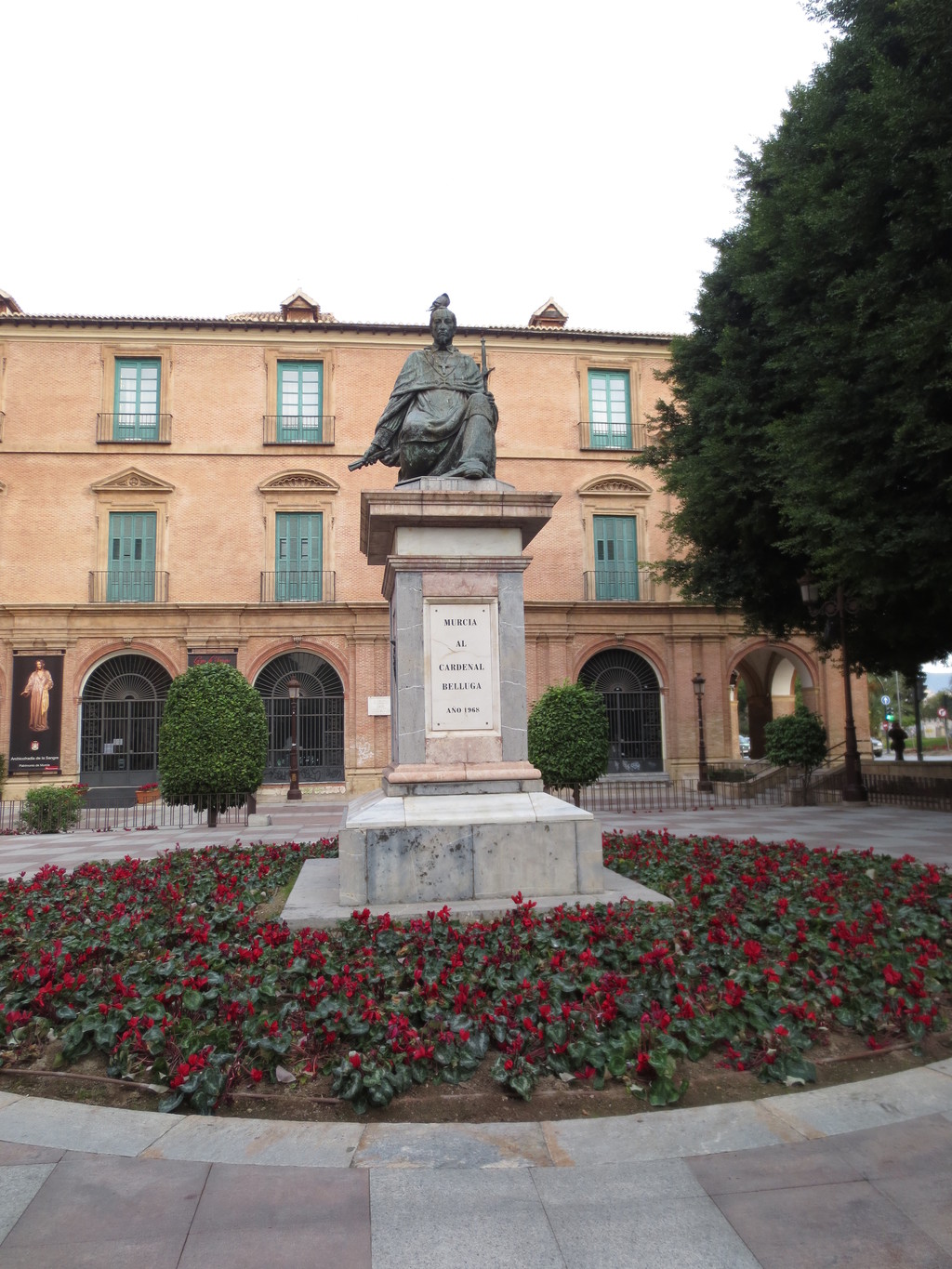 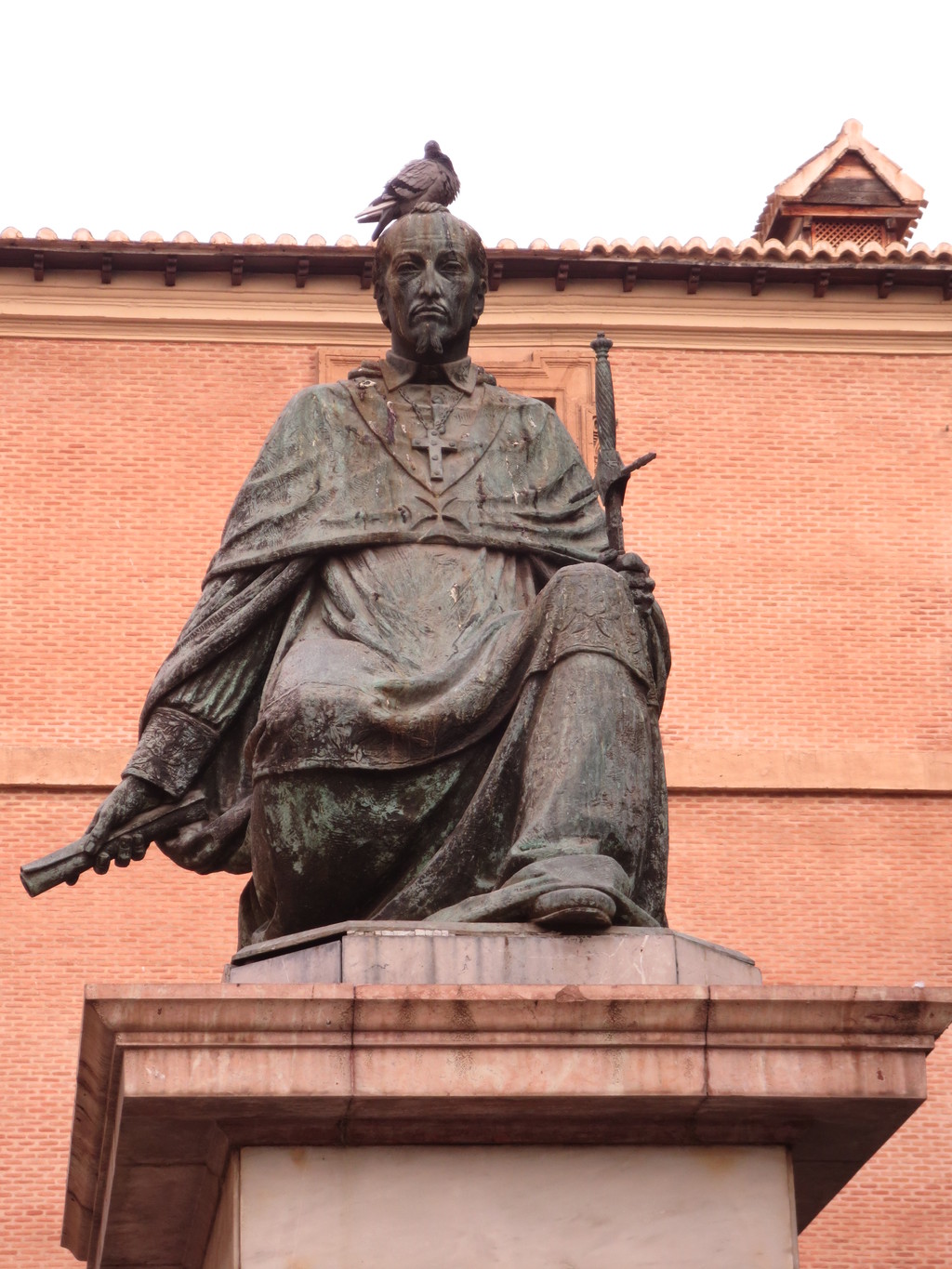 At the opposite end, almost at Gran Vía, there is a statue dedicated to the Murcian Nazarene. Here, a typical Nazarene is depicted, although only those who have their faces uncovered, and head tilted towards the right; at the base, there is an inscription, which translates to "THE CITY OF MURCIA HONORS THE NAZARENE HOLY WEEK OF 1998". 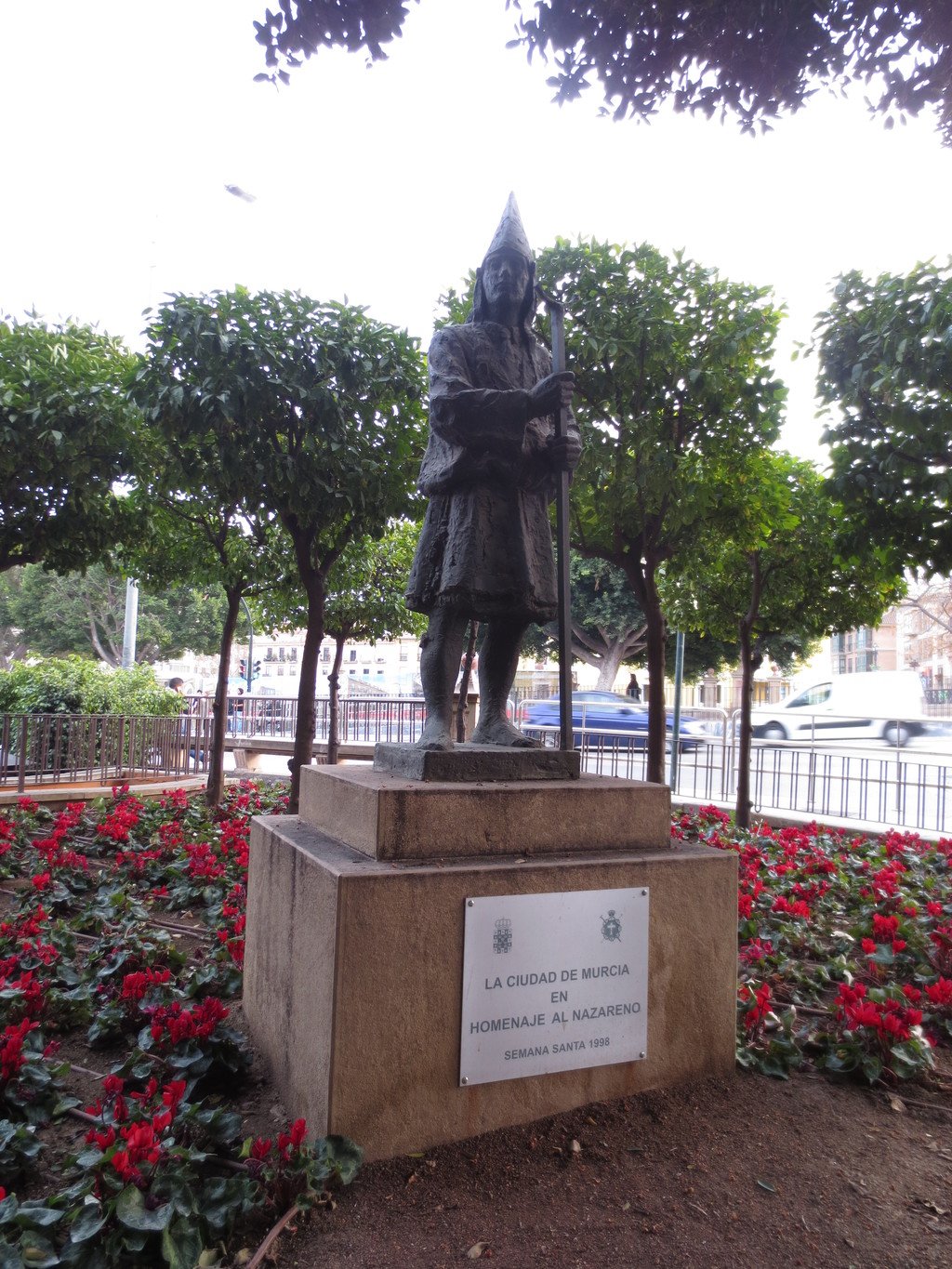 Another characteristic element of the square is the the fountains it has, which are rectangular in shape, quite long, and remind me of Arabic patios. The jets of water cross over one another, and when you couple that with the flowers, it makes it about a 10/10. I feel that without the fountains, the square would not be what it is; aquatic elements bring beauty and tranquillity to a place, but in this case there is no better decoration. 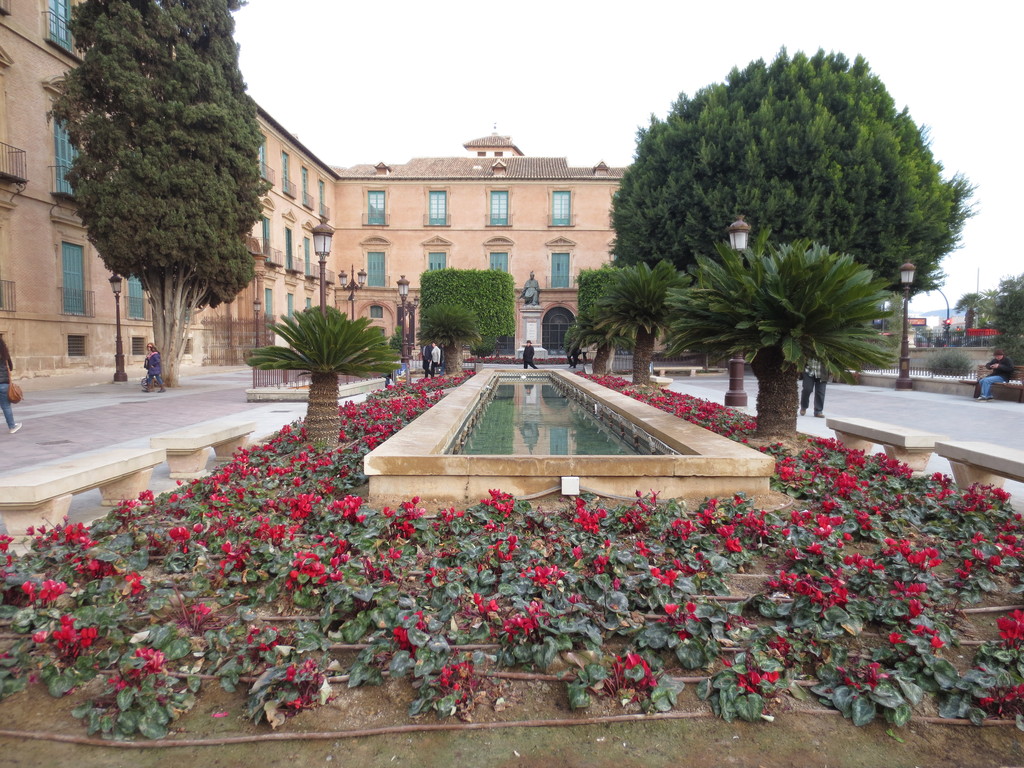 The fountains, the flowers and the palm trees give this place a unique beauty. 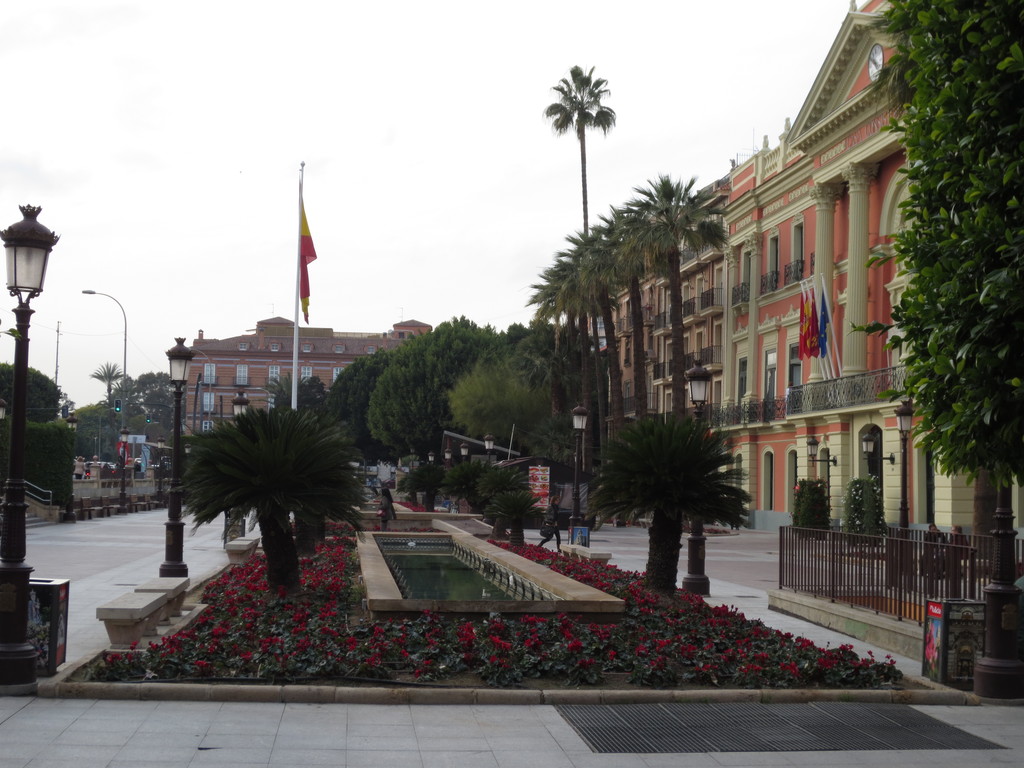 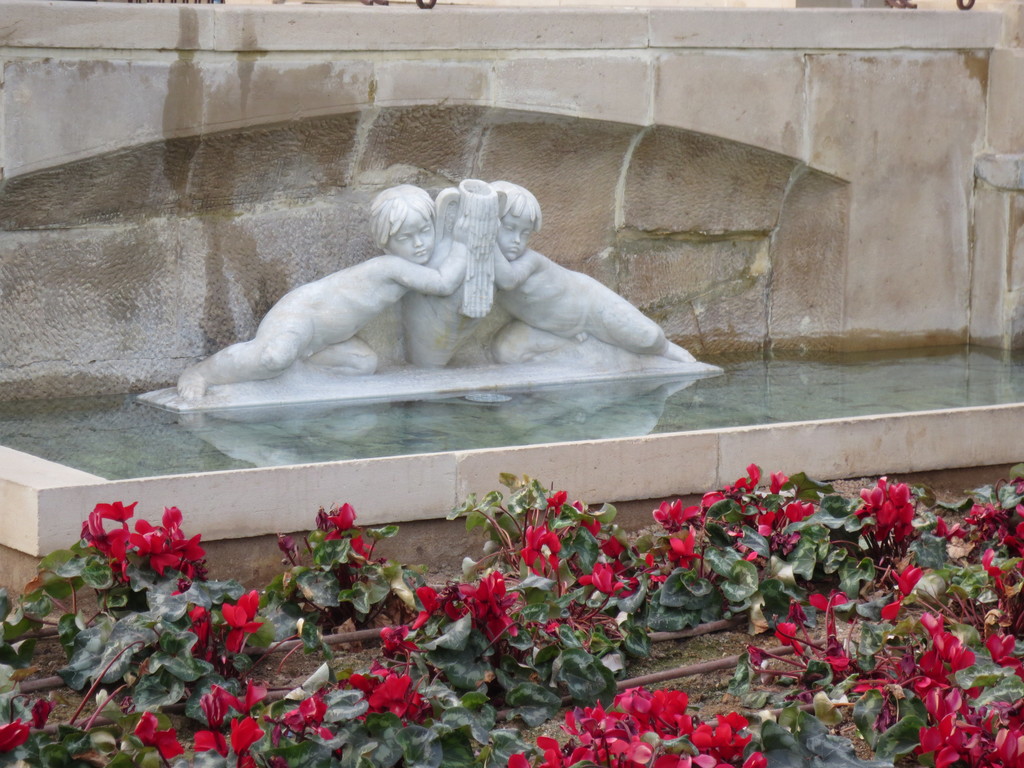 An interesting fact is that the place where there is the underground parking, of which the entrance is also on Glorieta square, used to be an anti aircraft refuge for citizens to hide in case of an attack during the Spanish War Civil. Currently, this car park is one of the most convenient to leave the car if you're heading towards the centre, although I think it is one of the most expensive. In addition to this, during the construction of this public car park, the remains of the Murcia Arab wall were found.

In the presidential balcony of the Town Hall, the reading of the testament of the Burial of the Sardine is made (one of the most important festivities in Murcia, for more information about this take at a look at my post about this).

The Glorieta is one of my favourite parts of Murcia, above all in spring, because there are loads of flowers, mainly around the flowers, and with the town hall, makes for a very picturesque scene, and somewhere where it's worth sitting down on one of the benches and enjoying Murcia's sun, or a beer with a tapa at one of the outdoor cafés. 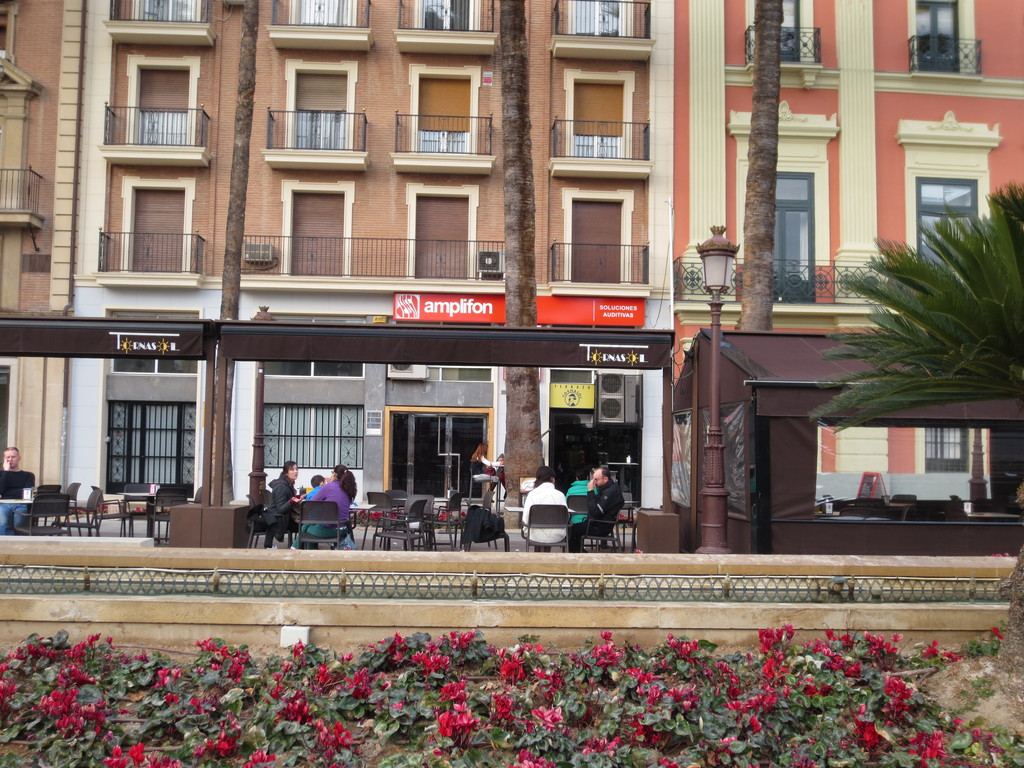 Getting there is really easy, it can be found at the end of Gran Vía street, just before arriving at the Segura river, and as I mentioned before, you can also guide yourself there with the help of the cathedral, I can assure you won't get lost. If you go by public transport, there are numerous bus lines which pass by here: lines 1, 6, 26, 28, 29, 30, 44, 49, 50, 58, 62 and 91. The tram doesn't go here yet, since it seems that they want to make another line with goes towards the del Carmen neighbourhood. However, the tourist bus has a stop at Glorieta, which was recently introduced, which does seem a bit strange to us Murcians as there seems to be little need for a tourist bus in Murcia, although it is also good that people are interested in Murcia. 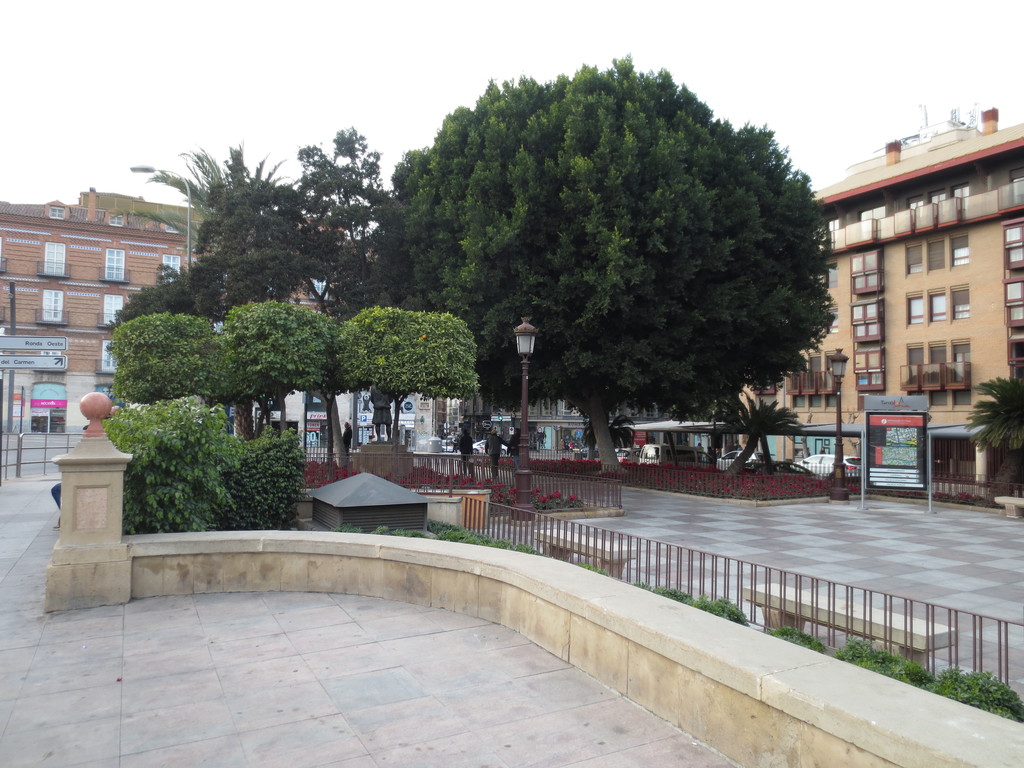 Do you know Glorieta Square? Share your opinion about this place.