Ruta de las fortalezas. (race) | What to do in Murcia

Holly Probyn — one year ago

FOR THE MOST DARING ERASMUS STUDENTS

53 kilometres and lots of mountains to climb. In this individual competition of Trail running, you will overcome all your limits, that being physical but also mental. Also, you will enjoy a spectacular view of Cartagena (the host city), from the walls and the most important hills including the San Juan castle, Galeras castle, Roldan hill... 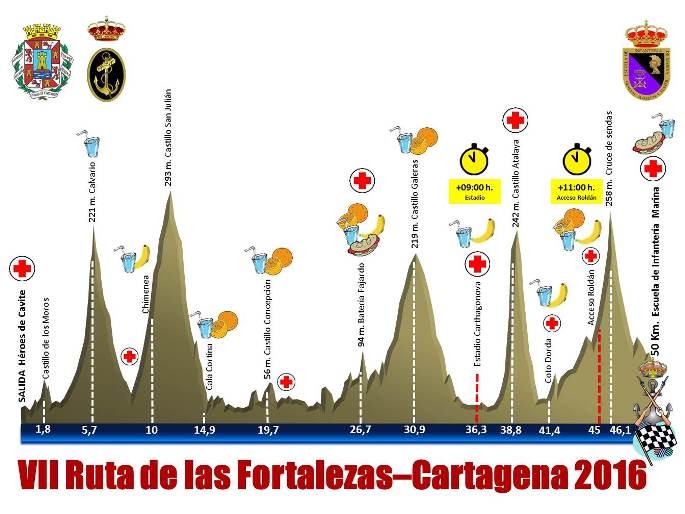 I still don't know at what moment I decided to go ahead with the 53 kilometres race in the mountains, but without a doubt it was the best idea I have ever had.

I was at the gym like any normal day when I saw the poster for the competition. I thought to myself "the people who do that race have got balls" and then I immediately had the brief idea of entering myself. I didn't think about it much, but I asked my group of friends if anyone was going to sign up and they made me do it too.

No, of course we weren't crazy. It was 53 kilometres, in the mountains, and with at least 5 months of training. I signed up! Yes, you have read that right, that same day I went onto the website and I signed up.

Due to the race being really famous, it exceeded the number of participants. Therefore, even if you sign up to it, your name has to be chosen out of a raffle. Finally, if they pick out your name as one of the crazy people who launch themselves into climbing the mountain, there's no going back.

My training started out as a joke. 5 kilometres on a running machine, 6 in the streets, 5, 6... my longest run was 11 kilometres. I wasn't aware of what was I was going to be faced with until I fortunately, found that I was in the race.

I received a message congratulating me for going to run 53 kilometres in the mountain, thanks, I suppose. The nerves started to kick in, and because of that I knew I had to step up my game. It was a real pain in the neck running for 10 kilometres up a hill, and a kick in the chest running 13 kilometres indoors, and there was something going around in my head when I started training again: this is impossible.

I did notice a big improvement, however without a doubt I thought 53 kilometres up to the peak was too much until...

One evening when my head started to let me down in terms of my rational thinking. I decided it was a good idea to go running to the closest hill in my village, around 7-8 kilometres away. With that, it would include the way back (in total at least 14 kilometres) and out of obligation I would have to return home to finish my training.

I didn't know what I was doing. What started with normal training, got out of hand. When I arrived there, it became dark, I didn't know how to get back and I didn't have any reflective clothing. I began to run along B-roads to avoid any form of danger, I didn't have a clue if I was going in the right direction, but I couldn't go on the main roads because I would be running in between all the cars at night (bad idea). Getting over the unexpected that night, I found myself in the neighbouring village, and all that was left was to go back home from there.

In the end, the training that night was nothing more and nothing less than 25 kilometres. And I wasn't completely out of breath! From that moment on, I knew that everything was possible, I only needed to push myself and keep on believing.

Trainers on, training done, laces tied, and 53 kilometres to run.

People were encouraging and shouting, and suddenly you realise you're part of these crazy people who wanted to complete a 53 kilometre run in the mountains. It was like a rainbow, 100% effort, 100% desire and no one to stop you.

Running the first 10 kilometres was no problem at all, smiling, waving, and with the perfect vision that everything was going to be fine. The atmosphere was incomparable, when you're in the middle of it and you start counting down the kilometres, you think you can really do it.

But then... everything went wrong. During the 23rd kilometre, I started to get muscle cramps, I have never had this problem before, and I had been able to run 25 kilometres in my training. Sometimes, life doesn't pan out the way you want it to.

Step by step, moving my legs with my hands, I decided that I was going to finish this race however I could. It was more than just a competition, it was the image of getting something I wanted in life, even if the wind was in my face and everything was going against me, I was going to succeed. If I really wanted something, however bad the situation, I would make sure I got it.

I continued walking, people were cheering me on and the voice inside my head didn't stop saying "one more step, one more step". 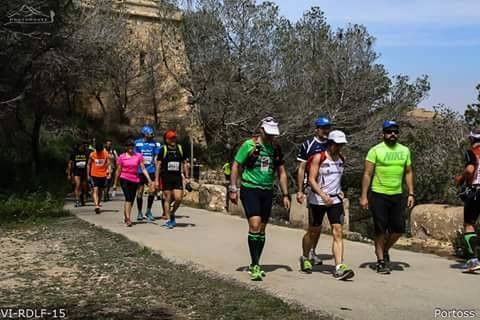 In this picture I'm the little man in the bright orange top you can see in the background. With my head looking down at my legs that weren't working, but without stopping. Little by little I managed to keep going. In some parts of the race, I ran, in others I walked, but I didn't stop.

I didn't know how long this race would last, neither did I know how painful it was going to be, but I had to finish it. It wasn't just a race.

One more step Luis, one more step. My thoughts started to come out as words and everything I was thinking, I said out loud. I think that more than one person wanted to kill me because I was being so annoying, but I had to do it to motivate myself and tell myself I would achieve it. If you want it, you can get it, that was the plan.

When I was going down the first hill, I couldn't believe it. I did it! The wind was against me, everything that could have gone badly, went badly, except my attitude. Your attitude is what leads you to get what you want. 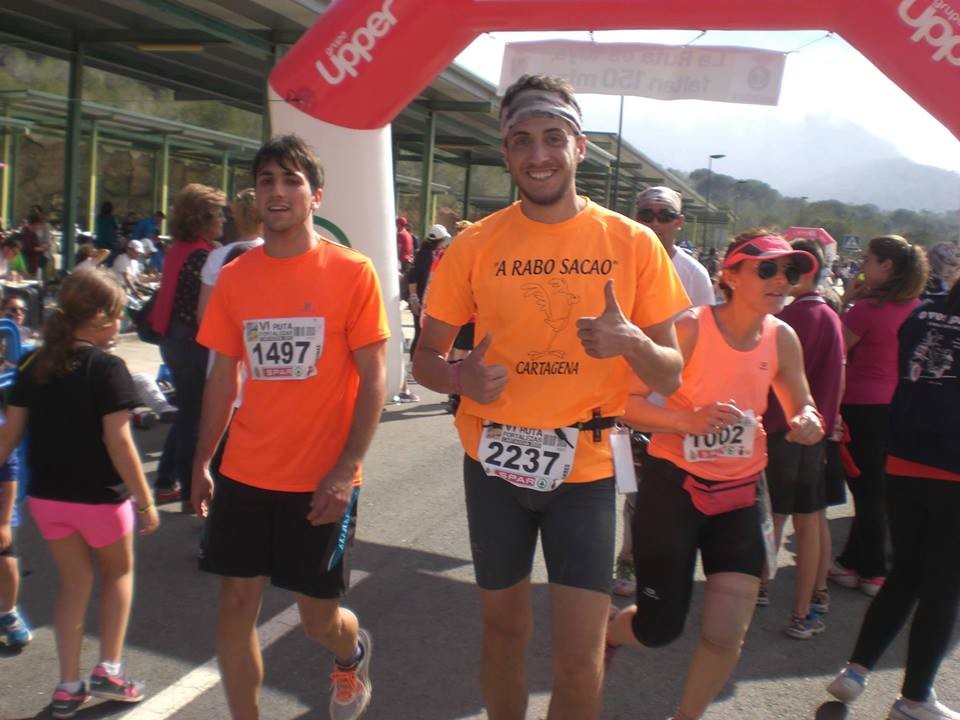 Finishing the race with participant number 1497 Luis Martínez Soto, with a time of 9 hours 00 minutes!

I did it, I was there, I didn't realise but my way of thinking had changed. One crazy thing led to the next like a butterfly effect, and this race would lead on to helping me get through my Erasmus on my own. I'll tell you about that another time.

Did you think that my crazy adventure had ended there? I think I have enough for one more.

Due to not being content of having suffered for 9 hours the year before, this year I wanted to relive this race for another 53 kilometres and more mountains to run in.

This year was different. I was much more prepared than the previous year. I trained every day and ran 15 kilometres and went back home jumping around, still with plenty of energy. Would I suffer as much as I did last year?

Weeks before the race Bryan Domingues told me that he wanted to run it with me, I couldn't have been prouder of that. If my mentality can't be compared to normality, Bryan's was one hundred light-years away. This crazy guy had gone around almost the whole of Spain by bike. Murcia to Malaga to see his sister, Murcia to Santiago de Compostela... Are we crazy? Well, I suppose the answer is yes, we didn't have much common sense.

You remember all the cramps you had from the previous year, how hard it was, but you also remember that if you put yourself to it, no one can stop you. 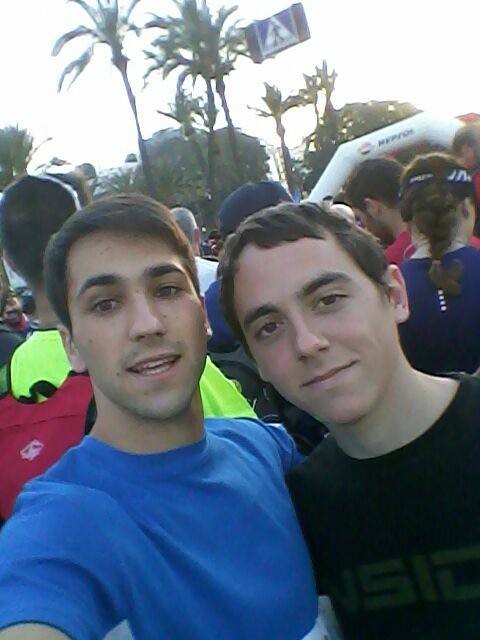 I started warning Bryan about the experience he was about to live in this race, and the good and the bad he was about to face. When you start running, you realise that everything is different, you already know what's going to happen, you already have the vision and you know what you have to do at each moment, you've already been there. You go up the first mountain, and again you start running, you speak out loud, making jokes during the first 15 kilometres but then... Luis my knee really hurts!

Bryan was about to have the same experience as I did in 2015, unbearable pain, ringing in your ears and 35 kilometres to go to finish the race. Side by side we started counting down the kilometres. Bryan, who is stronger than me, told me not to stop, that he could continue at my pace despite the pain.

Luckily for me, I didn't come across any problems in the race, I didn't notice any setback. But Bryan... he was having a hard time so I couldn't leave him. We managed to get through it together, and side by side we ran to every check point, sometimes supporting one another, other times it seemed like he had tonnes of energy, but in the end... 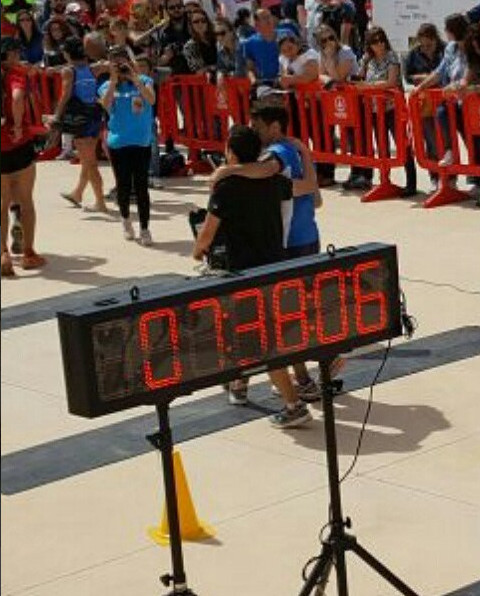 We did it, together, with some setbacks. We were there. Why? Because it was clear in our minds that we would get there and finish it. We knew what we wanted, and we went for it.

My first thought is very simple. If you're going to spend your Erasmus year in Murcia, this race can change your way of thinking. You're going to enjoy such wonderful landscapes of the city Cartagena, you're going to sweat and you're going to get to know yourself all at the same time. When all is said and done, this is one of the most beautiful things about Erasmus, finding yourself.

On the other hand, there are many other thoughts that can come from this race. If you're sure you want to go on an Erasmus year abroad, and if it's one of your dreams, you have everything you need to do it. Don't worry, the only thing you have to do is work hard and keep looking for it. If you really want something with all your heart, put in the effort and commitment, even if it isn't for you.

To give you an idea, I didn't even have a penny for my Erasmus year, my parents told me it was my decision, so I had to pay for it somehow. How was I going to do that? I'll tell you another time.

If your dream is to go on an Erasmus year abroad, fight for it and don't let anyone tell you that you can't do it. You don't have to be rich, or go to the best place, the only thing you need is a desire.

As Vetusta Morla (a Spanish rock band) say, "There's no collision, law, or gravity that can make you fall, even if they throw it at you".

Do you know Ruta de las fortalezas. (race)? Share your opinion about this place.