Lo Pagán | What to see in Murcia

Lo Pagán is one of my favourite beaches, it's very well known in the region of Murcia and during the Murcian summer, it is very highly visited, along with La Manga, which can be found on the other side of the Mar Menor.

It's a place with a lot going for it, not only in with all the people who come in summer, but also in winter and the rest of the year when there is quite a lot of social activity and tourist visits, although summer is when it's at its full capacity, the beaches there become absolutely filled with people.

Whilst Lo Pagán is famous for its beaches, it has other points of interest from a tourist point of view, which are well worth visiting, that I will be talking about. Practically all us Murcians have already seen it all, because from a young age you usually get brought to this place or if you go someplace else during summmer, you will eventually end up coming when you have a friend visiting or simply for a family day out. If this is not the case, when you're older it's worth coming for the nights out at La Curva during weekends in the summer. 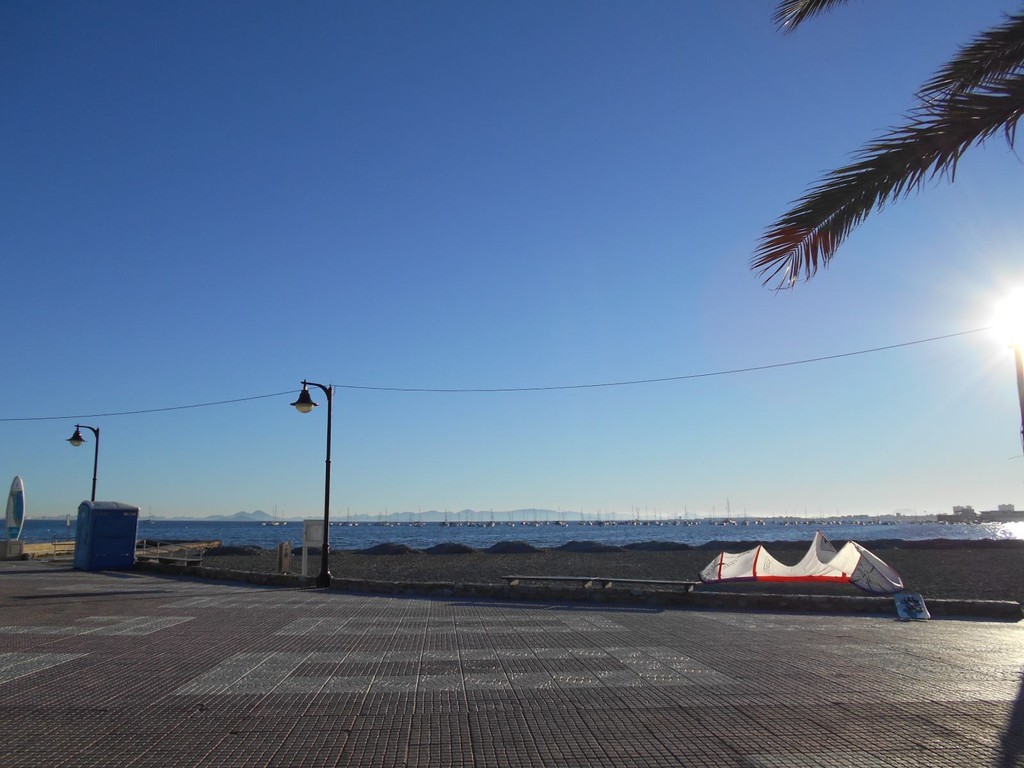 As a result, the Erasmus students should have this place down as somewhere to visit, on multiple occasions I've noticed Erasmus students on the bus to Lo Pagán and in truth it is great to see how much people from abroad like our region, our customs and our many beautiful beaches.

I'm going to start off by talking about the Lo Pagán promenade, which more or less begins at the famous Lo Pagán fair, continues round La Curva and then a long stretch until you reach Santiago de la Ribera - a hamlet of San Javier.

The Lo Pagán funfair is very famous in summer, it has a great deal of small, traditional attractions to go on; you can have a go on the bumper cars, a few years ago there was an attraction named Hulk and another called Aladdin, and I remember being a bit scared at the time but they were very popular back then. The bouncy castle is also a summer classic.

Nearby to the fair is a very famous restaurant, named Venezuela, it is worth going to, even if you you're not going to eat, just to see the aquariums with fish commonly found in the Murcian sea: lobsters, crabs, mussels, octopus and squid, amongst others, I liked seeing the live lobsters in the tanks and the very large crabs moving through the water.

If you go with a bit of money to spend, and want to eat out, I recommend you go to the famous 'Venezuela' restaurant (although there is also the Hijo de Rubio restaurant, which I have heard equally as impressive things about), it's very good although slightly on the expensive side; opting for a starter of something like Iberian ham or calamari can end up being about thirty euros a head roughly.

Continuing along our walk down Lo Pagán, you will reach the area with bars and clubs, which is called 'La Curva', where mainly young people and university students can be found in summer; the atmosphere is really great and the clubs are really good too, although having said that I did go there more when I was about eighteen years old, when there was a famous club called Bastilla, and another called Tela Marinera, I believe that the the latter still exists but Bastilla had its name changed, however the building itself is still there.

La Curva nightlife is obligatory stop in Summer, the shores of the beach becomes a mix of fun and beauty, great views of the beach from the terraces of the establishments, there are also tables along the short walk between the clubs and the seafront, where people go to drink their cocktails or beer.

Near to the clubs there is a terrace where concerts are held every summer, I went some years ago to an event hosted by the 'Cuarenta Principales' radio station and it was great as immediately after the event ended, I could continue the party in one of the adjacent clubs.

Bordering La Curva there are a great deal of bars as such, where people pre-drink before heading out to the clubs; they are small establishments where you can also have a chilled out dinner - I personally really like the Italian pizzeria, named La Cabaña, which is very famous. In my opinion, their pizzas are among the best in Lo Pagán; very flavoursome, and the dough is particularly well made, plus they have a dish containing very rich potatoes with garlic and seafood pâté, it's a delicacy, the price is standard, the pizza is round about 8 to 10 euros.

Also in this area are some very popular ice-cream parlours, you can find several situated just between the fair and La Curva - I personally like the ice cream from the place behind the bus stop, the servings are the biggest and it has the most flavours to choose from, plus they make the chocolate ice cream particularly well.

Plus, this part of the promenade is home to the port of Lo Pagán, with its large, docked boats with their enormous sails. It makes for a pretty sight to have the fair, La Curva and the port so close to one another; a friend of mine owns a boat in this port and I had the opportunity to sail with him on three occasions in the El Serviola event in 2014. It's a very nice sailing boat that is ideal for going out to the Mar Menor in, with food and some beers on those summer days, those were the best times... we arrived in La Manga, and greeted the crews of other boats we had seen whilst on our trip. 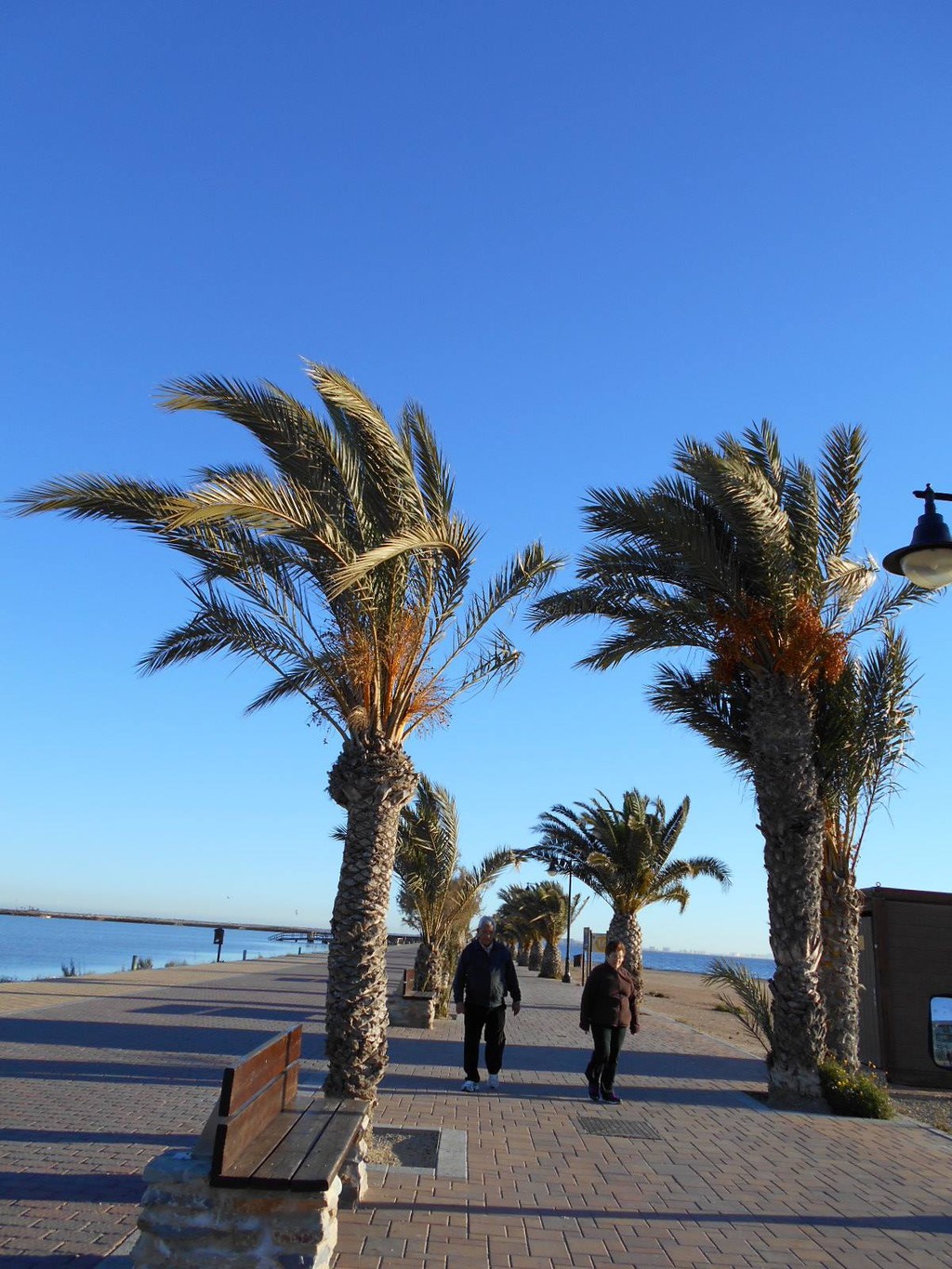 After La Curva, you come to a part of the walk that I love to do, and whist walking along you get to see some of the typical holiday houses of this coastal hamlet, falling more in love with the Mar Menor, its very calm water, sometimes so still that it seems like a swimming pool.

The best time to do this walk is during dusk, when the sun is setting and it is no longer as hot as during the summer days- which is when the aim of the walk is to head directly to the water; a response to the heat. But at dusk, you can enjoy the gentle sea breeze against you, watch people playing beach paddleball; there are also football goalposts where beach soccer matches are often held, plus there are nets for playing volleyball. In short there are many things to entertain you as you walk. 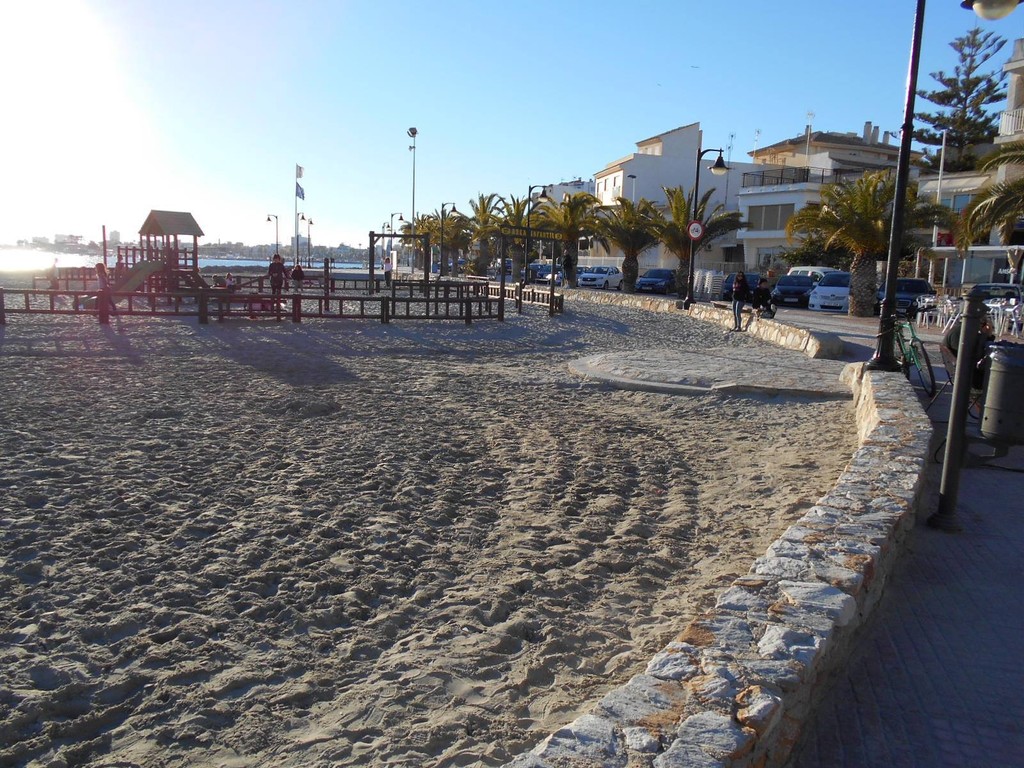 I love watching the line of the horizon resting on the sand, you get to see the Mar Menor when it's very quiet and in the background you can view all of La Manga; it's beautiful and I recommend you do the same, have a friend accompany you, bring some finger food and watch the sunset over La Manga - you'll find interesting conversations will arise whilst enjoying the view.

The last stretch of the walk is just before entering Santiago de la Ribera, here you can find another small port with little boats and many old wooden ones too. It seems like some have been there for hundreds of years but I feel this gives the coast here a historical touch, I like it a lot.

Before I finish off this blog post, I want to mention some other tourist hot spots in Lo Pagán. One of these is the famous windmill, situated just at the entrance to the hamlet. It's white on the exterior and paired with the wooden blades, it makes for a very typical image of this area, I think it should be remodeled, since the last time I was there, parts of the white paint were coming off and the top of the blades looked a bit old. 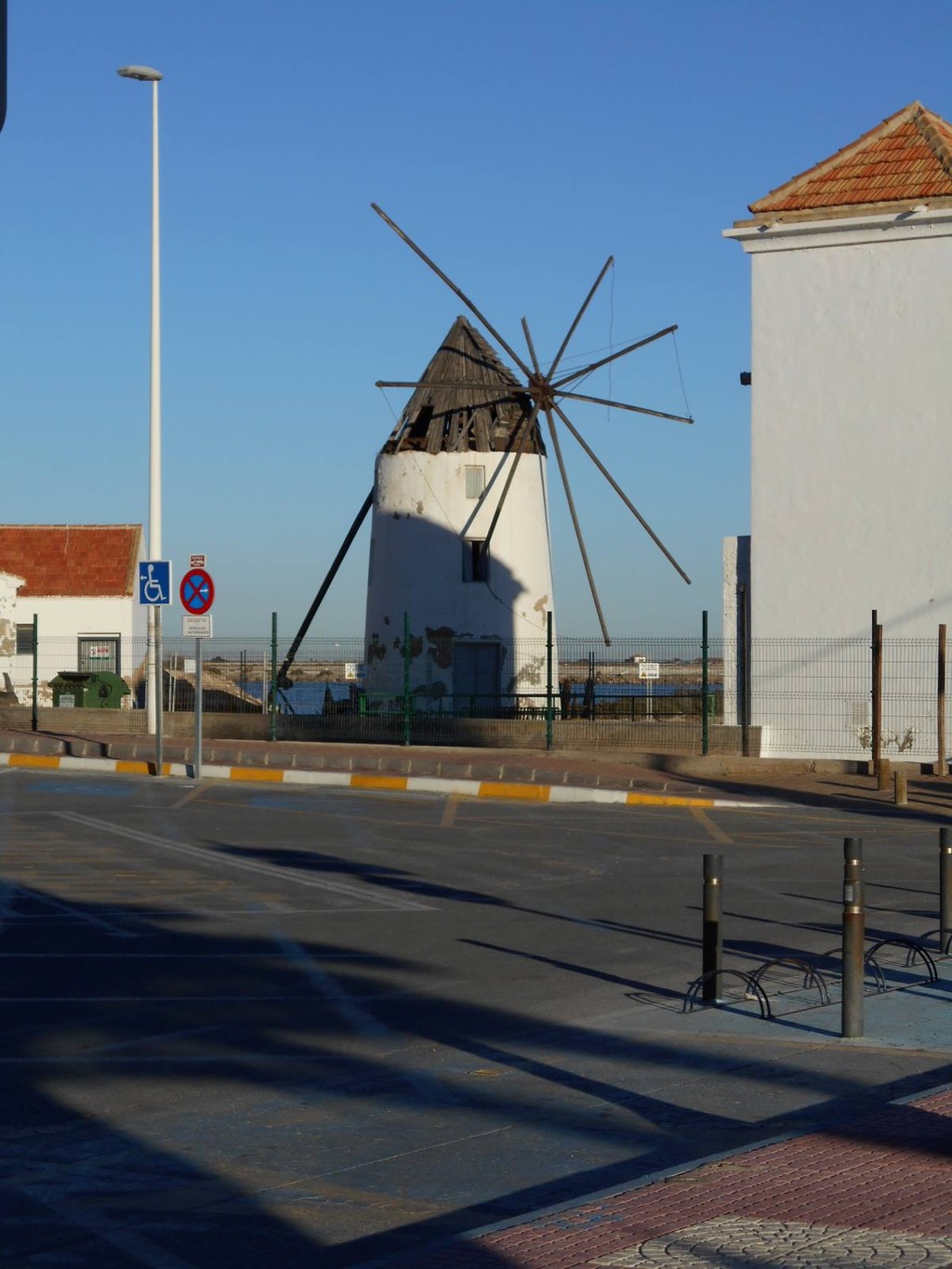 Not much further away are the famous mud baths of Lo Pagán. It is not just nonsense, since it is the largest outdoor muddy area in Europe. These mud baths are located in what is called the 'Charcas de Lo Pagán', where you can even find hotels which welcome visitors who come to enjoy the mineralizing power of the mud baths. 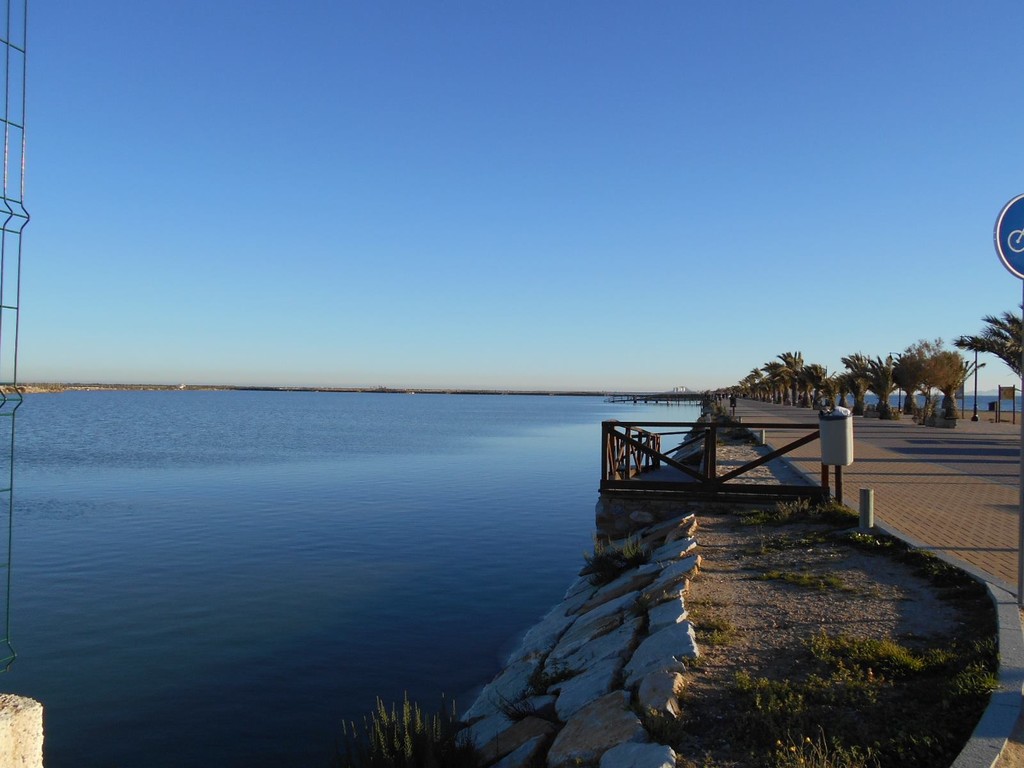 Many grandparents come here, drawn in by the famous healing powers of mud. Apparently the layer of clay removes toxic substances and dead cells from the skin, whilst purifying and allowing the epidermis and other layers of the skin to effectively renew themselves.

Apparently it is also very useful for rheumatologic pain, rheumatoid arthritis or osteoarthritis. These are just some examples when these mud baths can sometimes act as symptomatic treatment, logically it is difficult to comprehend it as a cure, although some people fervently defend it.

Another famous tourist point is the salt lakes of San Pedro where you can see a great number of birds, including beautiful flamingos if you're lucky. In summer, if you have the time it's worth going as you will see them, sometimes they arrive in flocks and it is very beautiful to witness it. 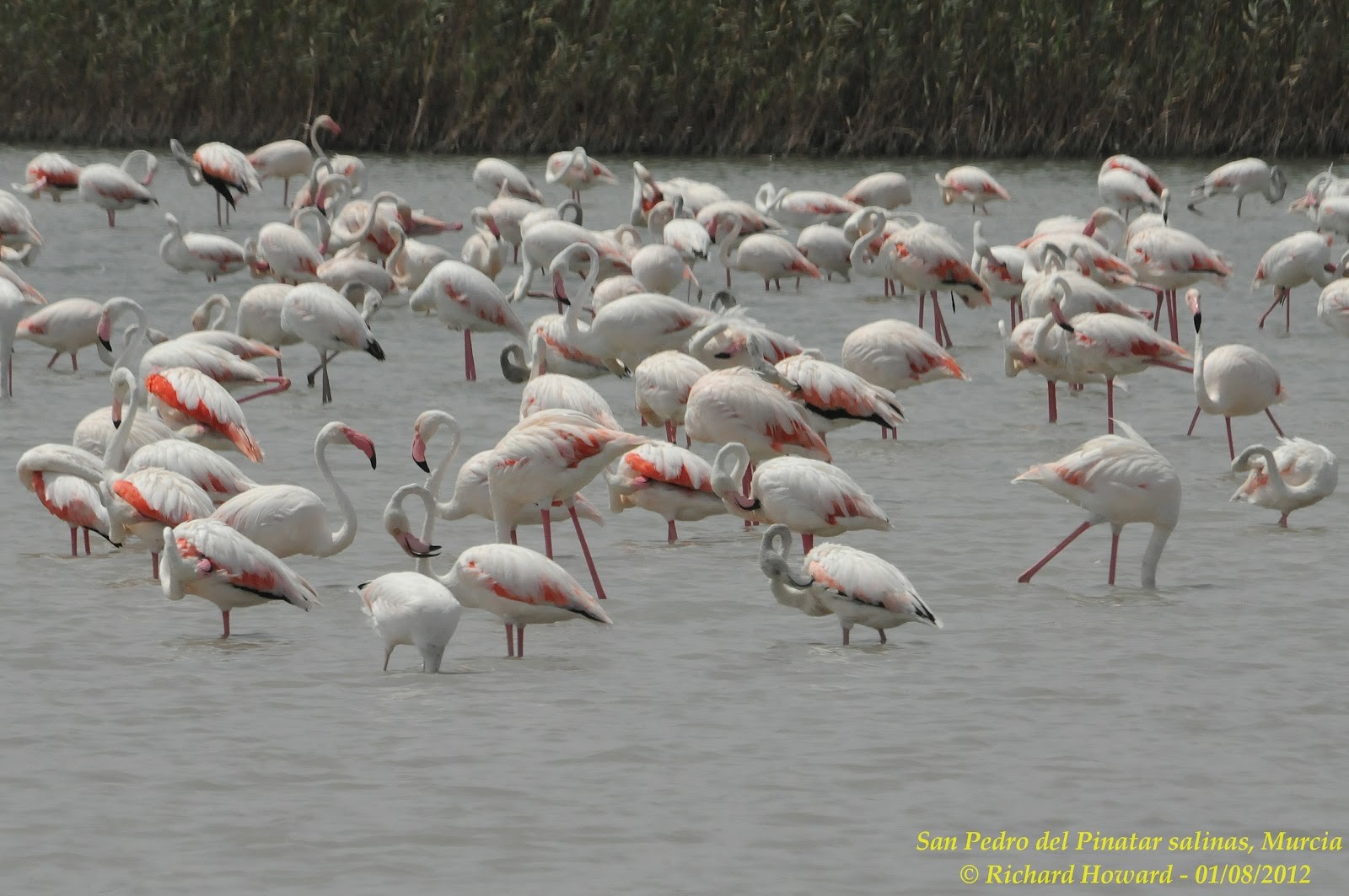 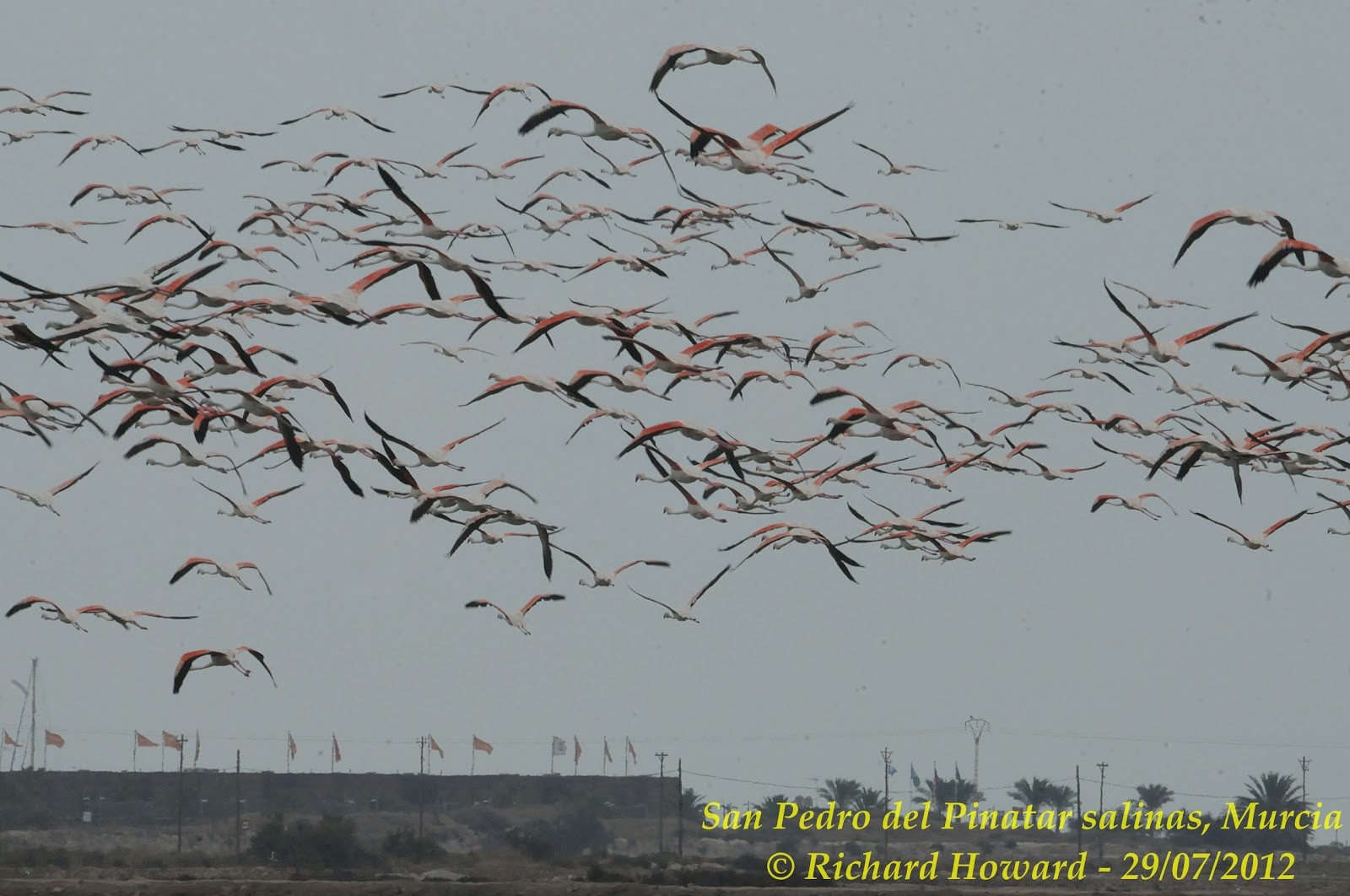 Flamigos at the salt lake

Do you know Lo Pagán? Share your opinion about this place.