Romanian Village Museum | What to see in Bucharest

A short trip to Romania's countryside traditions and lifestyle.

The village museum is basically a small village, with houses, churches, schools, mills and so on! What makes it special and fun to see is that all its buildings are from different parts of the country, each with its own local architecture. It's like all of a sudden you have neighbours from all over the country, only one yard away. Big houses, small houses, tall fences, no fences they all form one big mosaic of the Romanian folklore and old country lifestyles. You'll see original household tools, books and even floral decorations according to the house's place of provenience. 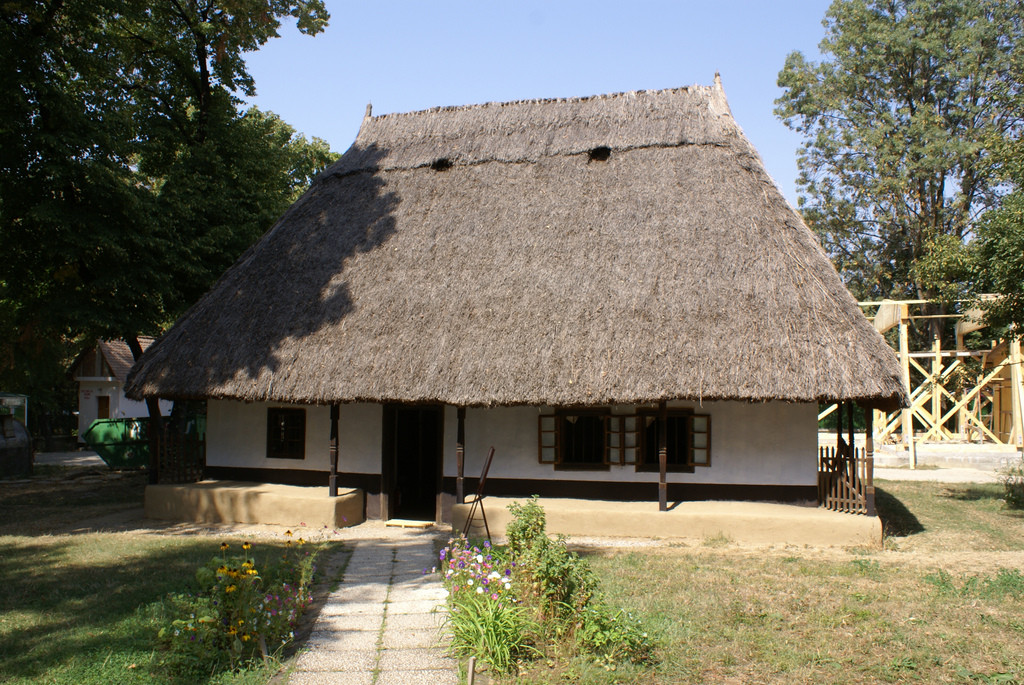 What is to be added is that the buildings are entirely and literally brought piece by piece from their original place of building to the capital and rebuilt. Most of them are thus hundreds of years old.

Besides, the museum is in my opinion the best "park" in the city, as it is completely in the nature, it has a beautiful lake in the middle, fresh air, intimacy and peace, the perfect place to go for a walk! If you're lucky you might even run into a traditional fest, as this kind of events are being held pretty often there. 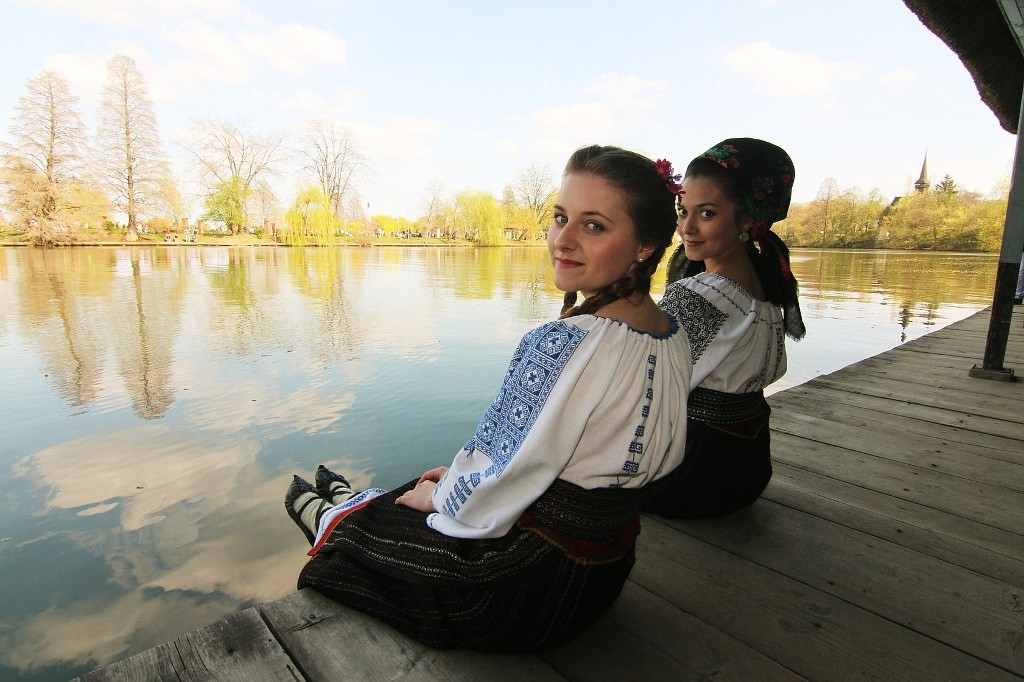 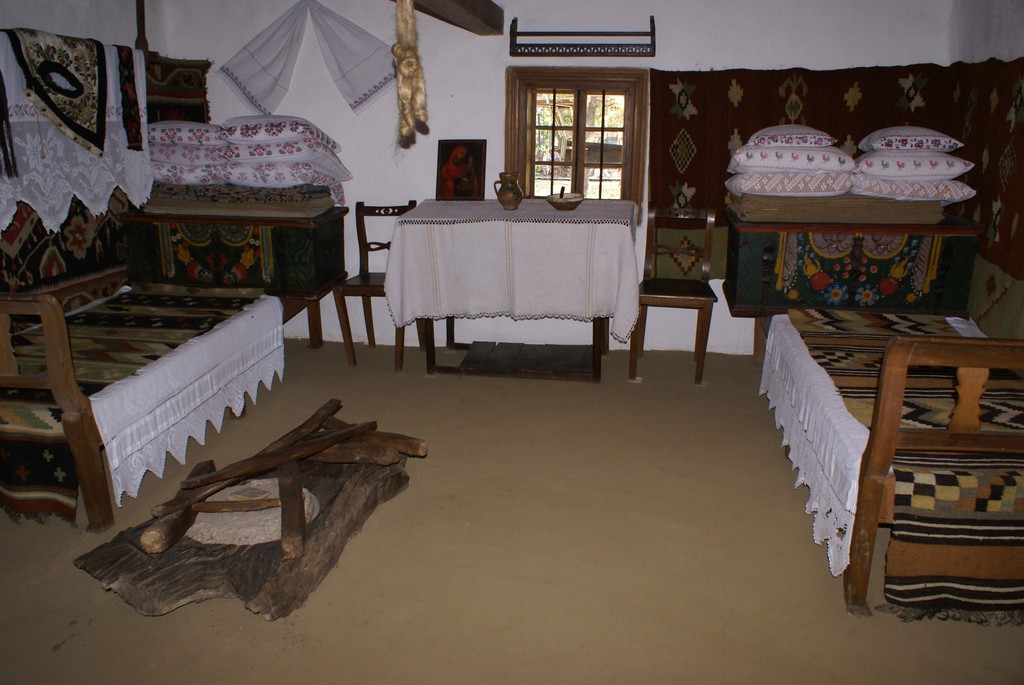 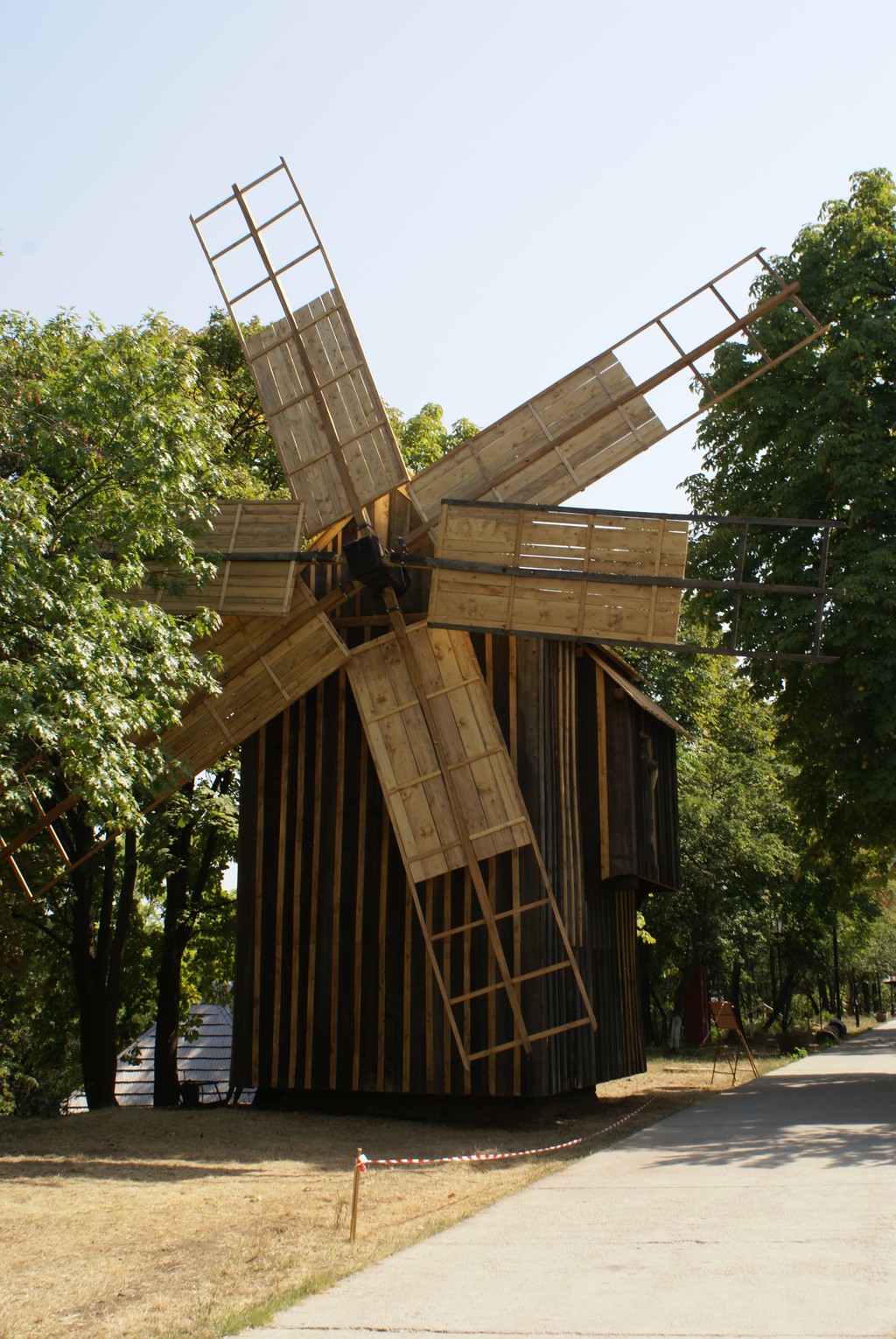 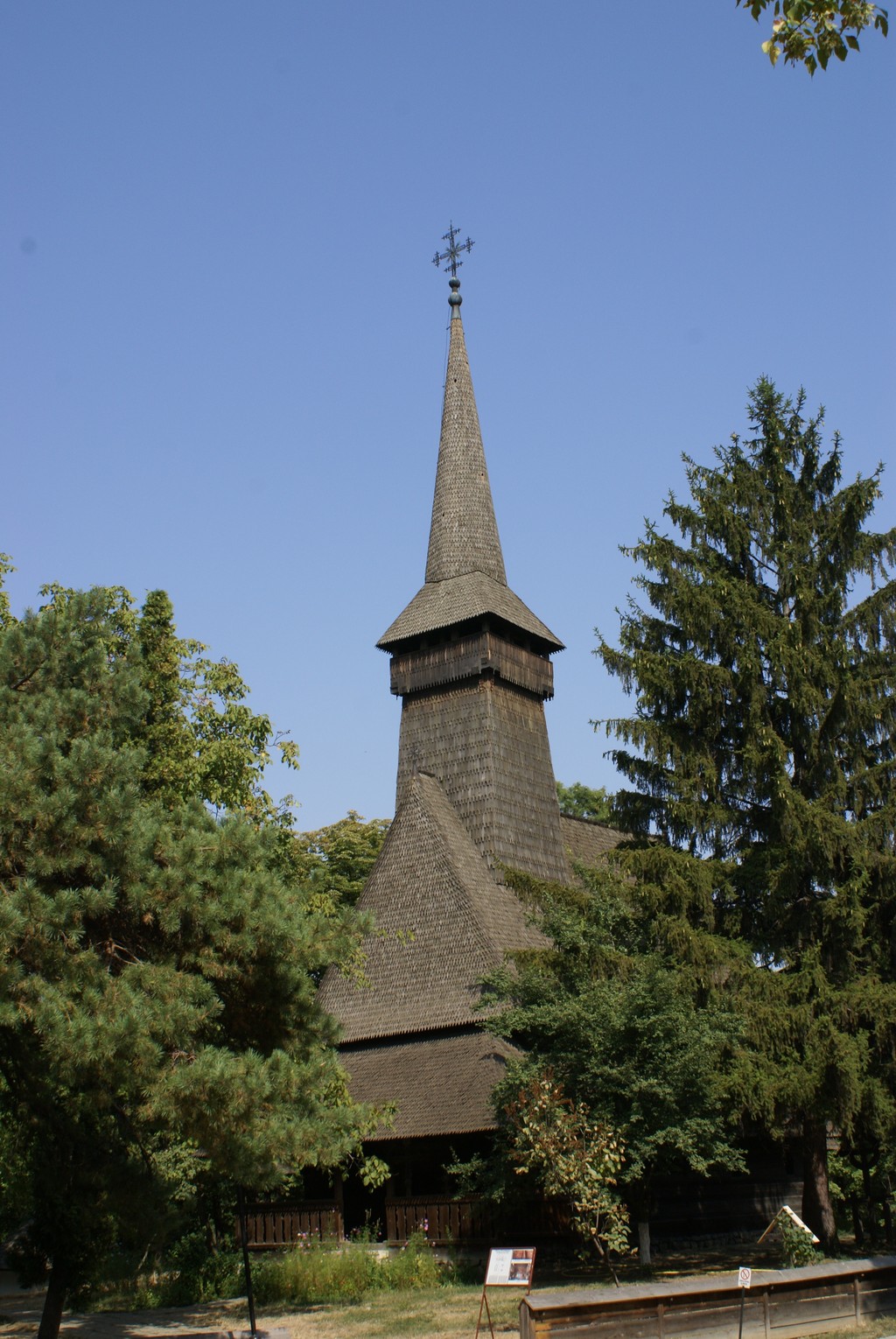 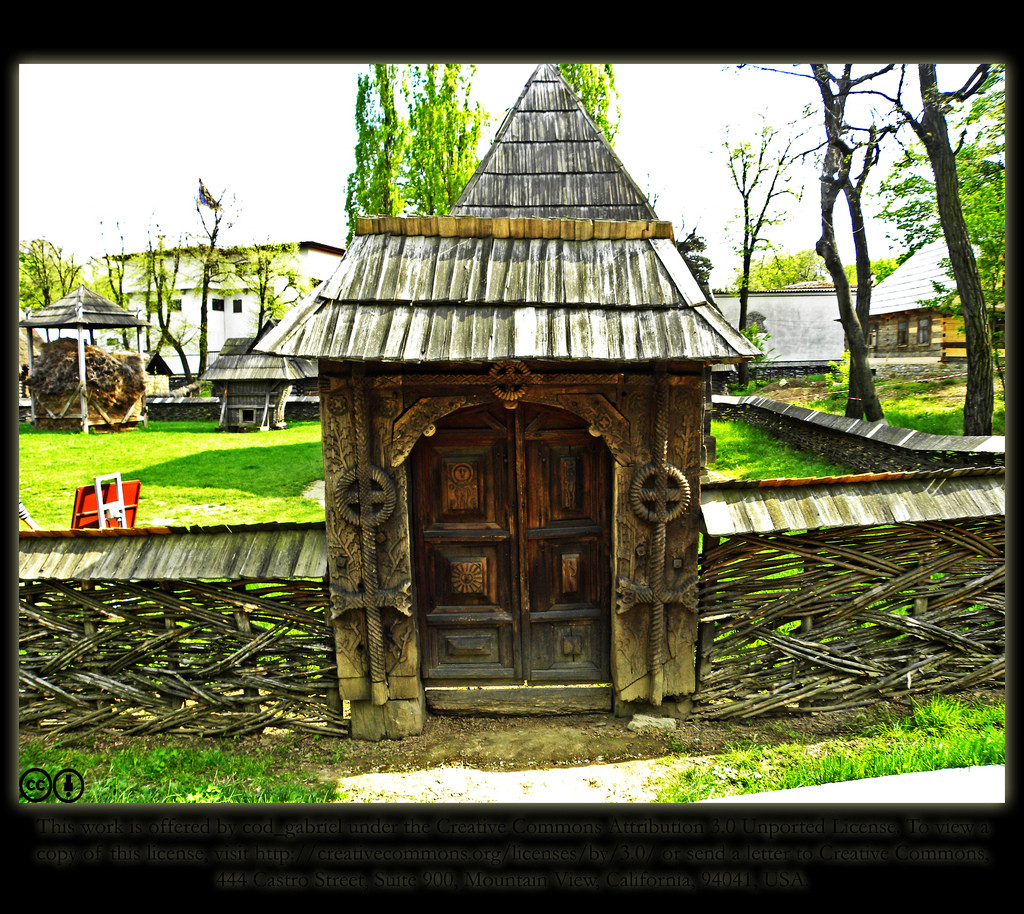 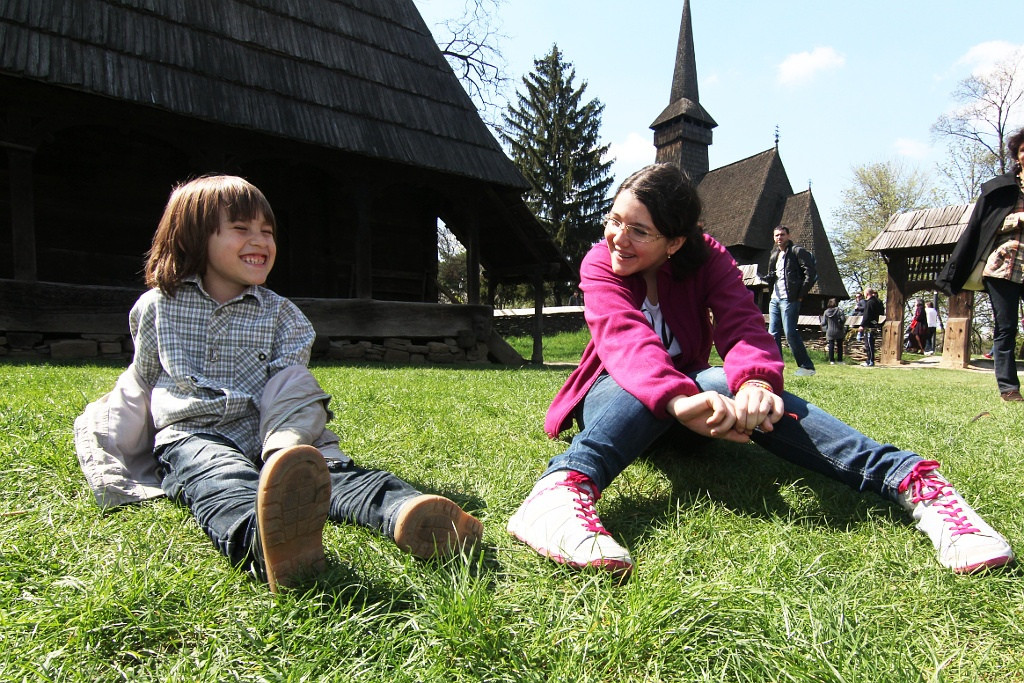 After you enter the Museum, in fact you are out in the open.  Clean, well maintained paths. Instead of trash baskets, someone had the inspiration, from place to place, straw baskets, much closer to nature.

At first you notice the large number of visitors is highly gratifying,  and there are actually many young people. And children, brought with the class on the trip. But this city has the mausoleum, erected in honor of fought and died here in World War I. What I mean is that the men told me that, ever since working there for 10 years, did not come any class of children at a school in Mărășești, visiting. I know that history taught lessons about war and about the participation of Romania in the confilgration. Do you think that would be a different frame, suitable for this lesson?

Village Museum is a wonderful location for walking with the whole family.  It is actually a complex of houses and villas, some of them find the possible visit.  Every box write a small history of the village in which it originated, a backyard where they can find various factors specific to each (haystacks with fan, chickens, dogs, a tiny garden beautifully, floral ornaments/starvation, specific sculptures etc.)

I always liked the practice of our ancestors, who were seizing their homes depending on the area in which they lived. In this case, the roof of reeds, because obviously the materials that are used in that area were flooded. And that blue, though strident, always caught my attention in enjoyable way. United had just plasmuita and in Dobrogea farms! Inside I made a picture, to tell us that we are not allowed. I'm not surprise too much country-sceneries, because I have always been close.

Half of the building is in the ground, and are covered with straw. The small Windows, designed to allow sunlight to enter the rooms, is located at ground level. I could go down (there was no charge), and a round table and low, three-legged, reminded me of eating the coffee table on us when we were small. We took seats as Mo, and may pour directly on the table a golden polenta which he cut with white thread.

In the alleys of the Park not missing any bancutele beautifully carved in wood, where you can shoot your little soul (if there was) any wooden or stone crosses that we remember those who are no longer on ... From place to place, a picturesque fan, which takes us immediately conjures up the sunny places from our country. What I liked least were some cars for children placed here and there, and I don't know why they chose to represent.

I saw that the Church that was surrounded by the brighten headlights at night.  I've gone and besides the other Church, brought in Gorj County if I'm not mistaken, all made of wood, to blacken as, in fact, all the churches are like this.

All exhibits, appendices, and homes are authentic; they were removed from their home villages and re-installed at the Museum, with the support of many craftsmen in these areas. I don't think it's novel that does not know that it is an open air museum. In the first four years of the opening (1936-1940) were exposed 33 houses and households, which covered the whole area of the country, with representative exhibits, already old at the time. In 1940, Bessarabia and Bukovina were annexed to the former SOVIET UNION, many refugees were housed at Bucharest in this House a few years ago, the Museum was virtually a colony of refugees, given the unfriendly activity.

Many homes and outbuildings were destroyed then their tenants, which stopped in 1948, with the change of Director (former student of Dimitrie Gusti's), who has never accepted that their work be destroyed and made the necessary steps to become a museum as a place to inform and educate the public. Since then, the Museum has diversified; permanent exhibitions and held occasional performances of Romanian folklore presentations of folk costumes. He also published booklets and books about life in the sat, habits and popular beliefs about the best methods for the conservation of the exhibits.

He also published booklets and books about life in the village, habits and popular beliefs about the best methods for the conservation of the exhibits. There was a time when the village Museum was considered a kind of annex to the Museum of the Romanian peasant, but after 1990, and regained ' independence '. In the Museum are; 18 houses in Moldova, 8 in Dobrogea, 11 in Oltenia, Muntenia, 8 4 Banat and 36 in Transylvania.

There is a new building in which are conducted many activities; research, conservation, display and presentation, in step with technological developments with present needs.

The day I was there, in the building, it was an exhibition exposition of painting on glass.

I travel a lot and I saw different homes in the most remote areas of the country. But this two great housesreally impressed me. They are those of Broadswords (Transylvania); one covered with straw and another of twigs glued to the ground. The latter struck me much, because I'm thinking about what needed to be rebuilt periodically because of heavy rains and snow.

Walking in the village Museum was for me as a little ' trip ' to the country. Everywhere is green; the houses are between the trees, the air is clean and the place is very clean. I've seen bits of many villages and beautiful, all in nature. The grass is everywhere, interrupted only by the beautiful cobbled alleys and colorful lanterns with solar charging. Lime-trees and Jasmine were still in bloom and it smelled nice, the greenery. There are plenty of benches to sit and rest or to admire.

Do not miss it!

History and architecture of the country in a tiny space

Interested in history and architecture? Want to know how people used to live in Romania? To find these answers visit Village Museum in Bucharest, where you will have a chance to walk in the village of romanian history.

Village Museum is one of the oldest open-air museums, founded in 1936. It is ethnographic museum, showing life of romanian peasants from different regions. With almost 300 authentic objects you will certainly get to know history and traditions of this great country. Farms, stalls, houses, watermills, churches, wells,... the list of things to see can go on. Some houses are also open to enter and see the traditional furniture, decor, crafts and a chance to imagine life in 17th or 18th century. Some of the objects are originals, they were brought into this museum to protect and preserve them.

I had a great time visiting this museum. It is really well done, very informative and shades of the trees give you some time to cool down from the hot summer sun. It is located in the huge park in the north part of the city, near the famous Arch of Triumph. Ideal location for relaxed afternoon, walking among beautiful traditional houses, while you pet cute cats that are all over this place. Plus, the entrance fee is really cheap so there is no excuse for you not to pay a visit. Museum also offers you a chance to buy some authentic souvenirs from a souvenir shop or some handcrafts from ladies working in the museum.

Do you know Romanian Village Museum? Share your opinion about this place.