The Rembrandthuis Museum | What to see in Amsterdam

The Rembrandthuis Museum in Amsterdam 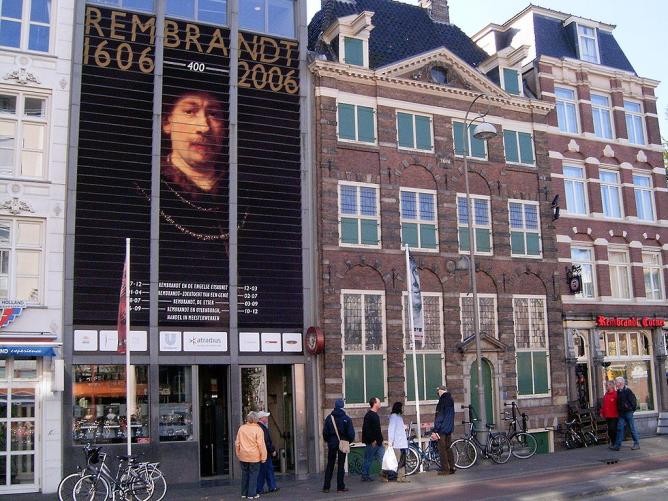 The outside view of the Rembrandthuis Museum.

One of the things that you must not miss if you are an art lover and you travel to Amsterdam is the Museum het Rembrandthuis or the Rembrandt House Museum. The Museum Het Rembrandthuis is located in Jodenbreestraat 4, 1011 NK Amsterdam. It is only ten minutes walk from the Amsterdam’s Central Station and very close to the Nieuwmarkt.

By visiting the Museum we had the opportunity to see how was the place where Rembrandt van Rijn (as his full name was) lived and worked. Rembrandt was born in 1606 and he died in 1669. This house was very special to Rembrandt because his son Titus was born in it and later his wife Saskia died at a young age, and it is the place where many of his famous masterpieces were made.

The interior of the house was restored to its present form, the 17th- century glory and the rooms have been refurnished with Rembrandt’s work of art, furniture and other objects from Rembrandt’s time. 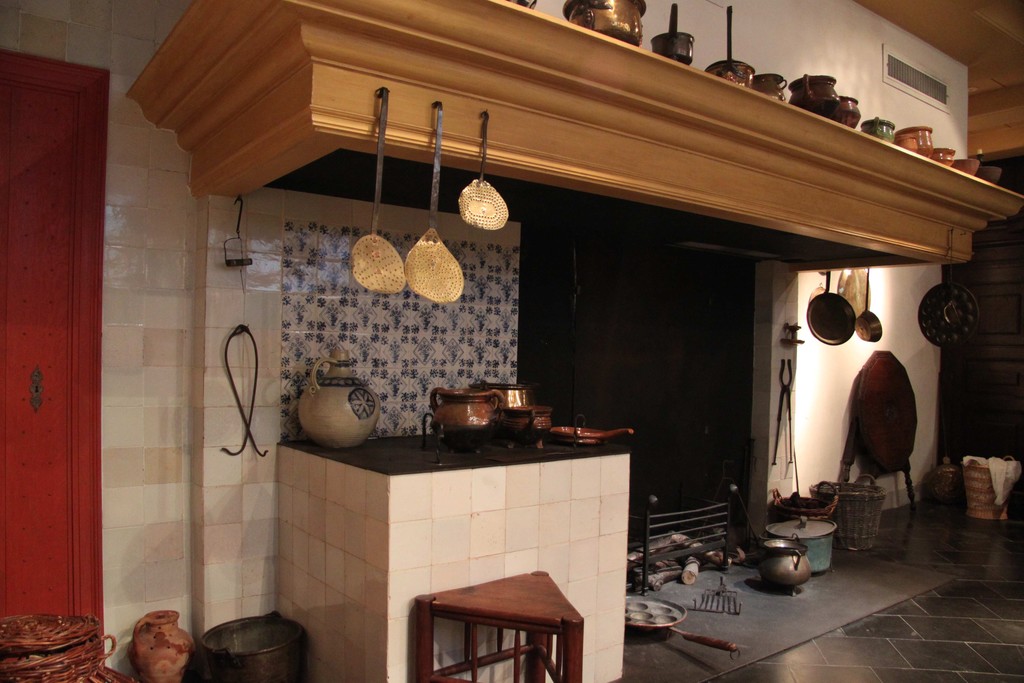 The History of the House

The building was constructed in 1606 and 1607 in what was then known as Sint Anthonisbreestraat. The house was built on two lots in the eastern part of Amsterdam. Many rich merchants and artists settled in this new part of the town. The house can be clearly seen on a bird’s eye view map dating from 1625. It is a substantial house with two stores with a stepped gable. In about 1927 and 1928 the house was drastically remodeled. It was given a new facede, a triangular corniced pediment and another storey was added. The reconstruction was probably overseen by Jacob van Campen, who was later to make his name as the architect of Amsterdam Town Hall (which is now the Royal Palace on Dam Square). Rembrandt lived in this house between 1639 and 1658.

As our guide told us Rembrandt signed in 1639 a contract governing the payment of the purchase of the house in the Breestraat. The purchase price was thirteen thousand guilders, which was a huge sum for his days and of course he could hot come up with in its entirety. Rembrandt was, however, allowed to pay it off in installments. At this time Rembrandt had already established his reputation as an artist. In the same year he bought the house, he was awarded the prestigious commission to paint the Night Watch (now it is in the collection of the Amsterdam Museum but it‘s permanently displayed in the Rijksmuseum and it is the best known painting of its collection).

Although he was earning a lot of money, Rembrandt was unable (or unwilling) to pay off the mortgage. This was eventually to bring out his financial down fall. Between 1652 and 1656 Rembrandt did great attempts to get his hands on money to pay off his debt. Unfortunately he did not succeed and was forced into bankruptcy. It was 1656 when Rembrandt’s property was inventoried for the benefit of his creditors, and his household effects and collection of art and curiosities were sold. After three years, in 1658 the house was auctioned and fetched something over eleven thousand guilders. Rembrandt moved to a small rented house on the Rozengracht, where he lived until his death in 1669.

In 1660 and for two more years Rembrandt’s former house was shored up and split into two parts. It was to house several different families up to the end of the nineteenth century. During these two years the house was altered several times, and its condition deteriorated over the years. The house might well have been demolished had it not once had such a famous occupant. Action was taken on the occasion of the Rembrandt exhibition in 1906. The City of Amsterdam bought the dilapidated building and shortly afterwards handed it over to the Stichting Rembrandthuis, a foundation set up in 1907. The trustees of the foundation wanted to return Rembrandt’s former home as accurately as possible to the state it was in around the middle of the seventeenth century. The envisaged reconstruction did not, however, go ahead. The board opted for a contemporary approach without historical references. The Rembrandt House became the setting for a print collection. The drastic restoration was carried out under the supervision of the architect K. P. C. de Bazel. The restoration of the house was completed in 1911, and Queen Wilhelmina opened the museum.

The new wing, which was opened on 7 May 1998, houses two exhibition galleries, the secretarial department, offices and the library (in which you can study, not only using books but also CD-roms), with the Rembrandt Information Centre (as known as RIC- it is located on the fifth floor of the new wing and you can find the answers to questions you might have about Rembrandt and his work and it is open to visitors on weekends by appointment). Once the new wing was completed, it was possible to resurrect the old plan to restore Rembrandt’s former home to its original condition. The reconstruction did not progress without a hitch. Champions and opponents of the plan conducted a fundamental debate about the ethics of the restoration of historic buildings.

Once the board of the Rembrandt House was given the go-ahead, the work proceeded very carefully. In order to tackle the restoration plans as meticulously as possible, a restoration team was put together. It was headed by the building historian Henk Zantkuijl, an expert in seventeenth-century houses. The plan was based on historical knowledge built up over many years. There was also a thorough study of available sources. The inventories of the house were very important—the inventory of 1626 belonging to the first occupant of the house and, in particular, the inventory that was compiled in 1656 because of Rembrandt’s bankruptcy. This latter source enabled the experts to work out how the house was laid out during this period and how Rembrandt had used the different rooms. Some of Rembrandt’s drawings and etchings provided additional information. The structural drawings for the restoration were made by architect Maarten Neerincx in consultation met Zantkuijl. The work was done by the firms of Kneppers and Midreth. The restoration was completed in 1999.

In the Rembrandt Museum you can enjoy daily demonstrations of etching and painting that show you the way that Rembrandt worked in that period of time. On top of that, there is a continual workshop that is offered at no additional cost, and gives you the opportunity to do your own etching in Rembrandts’ student studio. 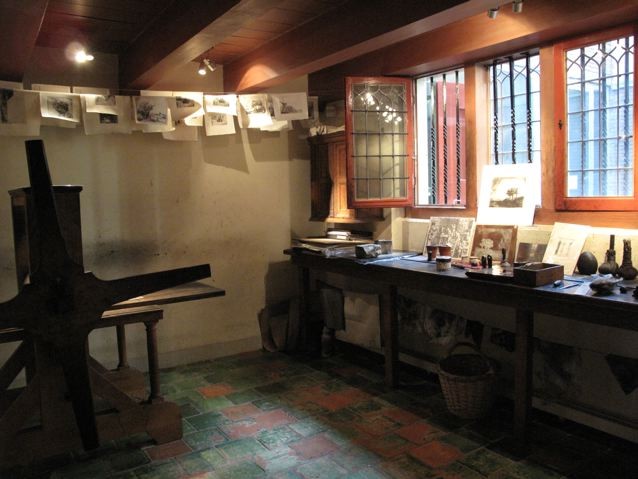 Furthermore, when we where there, the Rembrandt House Museum was devoting an exhibition to the pupils Rembrandt trained during the later period of his career (from around 1650, until his death in 1669). It features some sixty drawings and twenty paintings by artists including Nicolaes Maes, Willem Drost, Abraham van Dijck Jacobus Leveck and Arent de Gelder from major Dutch and international museums and private collections. Rembrandts’ Late Pupils – Studying under a Genius, showcases how Rembrandt influenced his students, his teaching methods an the teacher-pupil relationship, shedding light on the Netherlands’ most famous artist’s approach to his successors.

So do not miss it!

Follow a guided tour to learn all the important information.

Do you know The Rembrandthuis Museum? Share your opinion about this place.

View all Erasmus in Amsterdam