Torre Tavira | What to see in Cadiz

A must see on a sunny day

I have now visited the tower twice in my time in Cádiz, once with my father and brother, then again more recently with my friends here. Claire has always wanted to go up the tower but is afraid of heights so hadn’t got around to doing it yet, but as she is leaving us for Italy in a few days we decided that we would get it done before she went, so that she didn’t miss out. It was a beautiful sunny and clear day, so we headed towards the tower, which despite being a tourist destination is very easy to miss and walk straight past. So be sure to keep an eye out for it when you decide to visit. 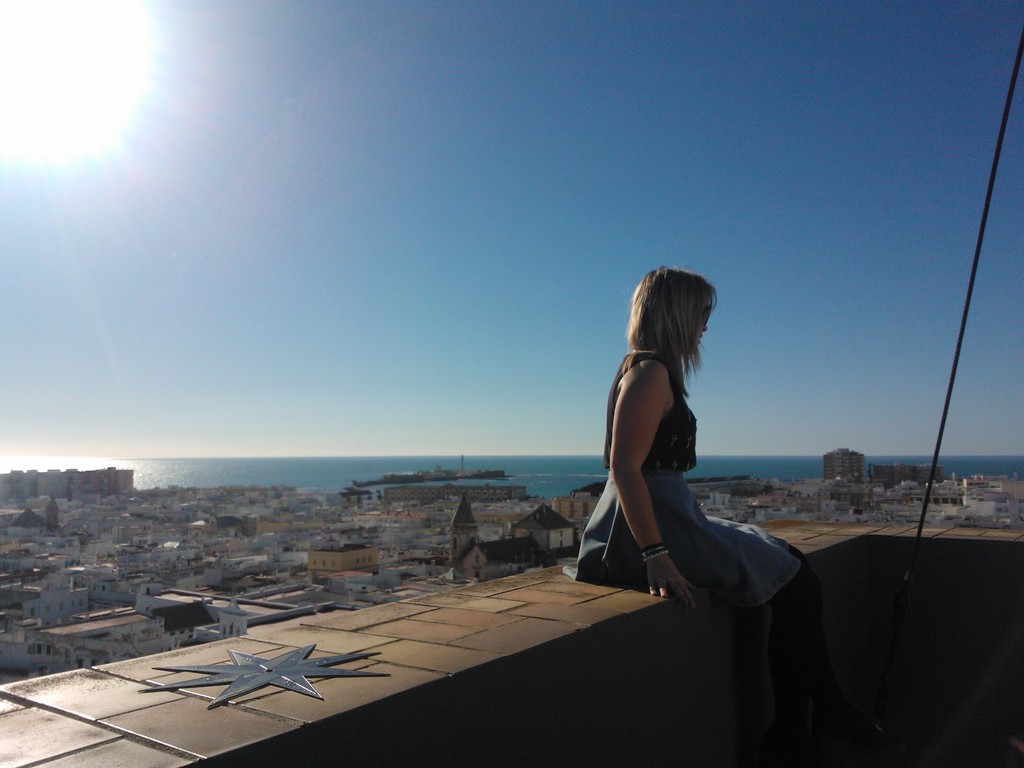 Once inside there is a little foyer with a desk where you can buy your tickets, €5 standard entry and €4 for concession, which is available for students, over 60’s and more, but they do ask for proof of eligibility, such as a student ID card. Once you have paid you are offered an information leaflet and a quick explanation of the different floors of the tower and a ticket for the "cámara oscura show". We were told that the next show in our language would be in half an hour, it is very useful that the people who lead the cámara oscura shows can speak several languages so there is no need to miss out on the details if you do not speak Spanish. 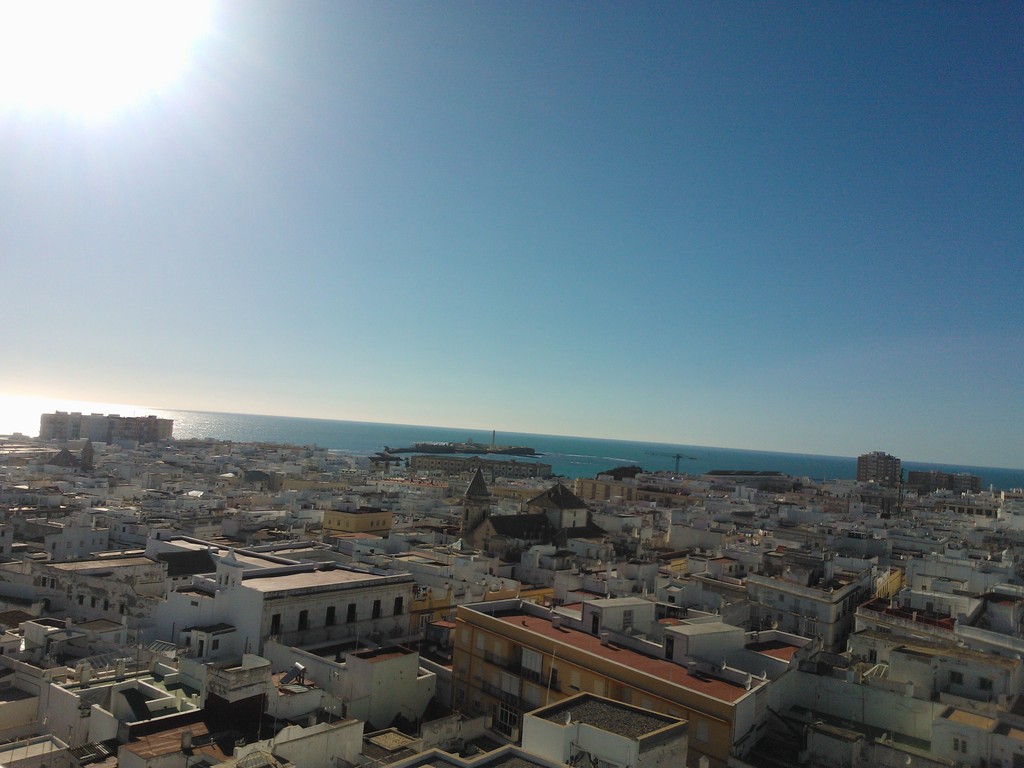 We headed off up the 172 steps that lead up through the tower to the top, the walls are adorned with countless paintings and pictures of Cádiz and the Torre Tavira itself, which makes the ascent more interesting. The steps themselves I am not overly fond of them, they are made of glass so are somewhat see through, this is obviously to allow light into the stairwell but can be somewhat disconcerting, they are also very slim shallow steps with bigger landings to allow people to pass one another on their way up and down, when travelling in a larger group it can be somewhat of a palaver trying to get past other large groups on the stairs. 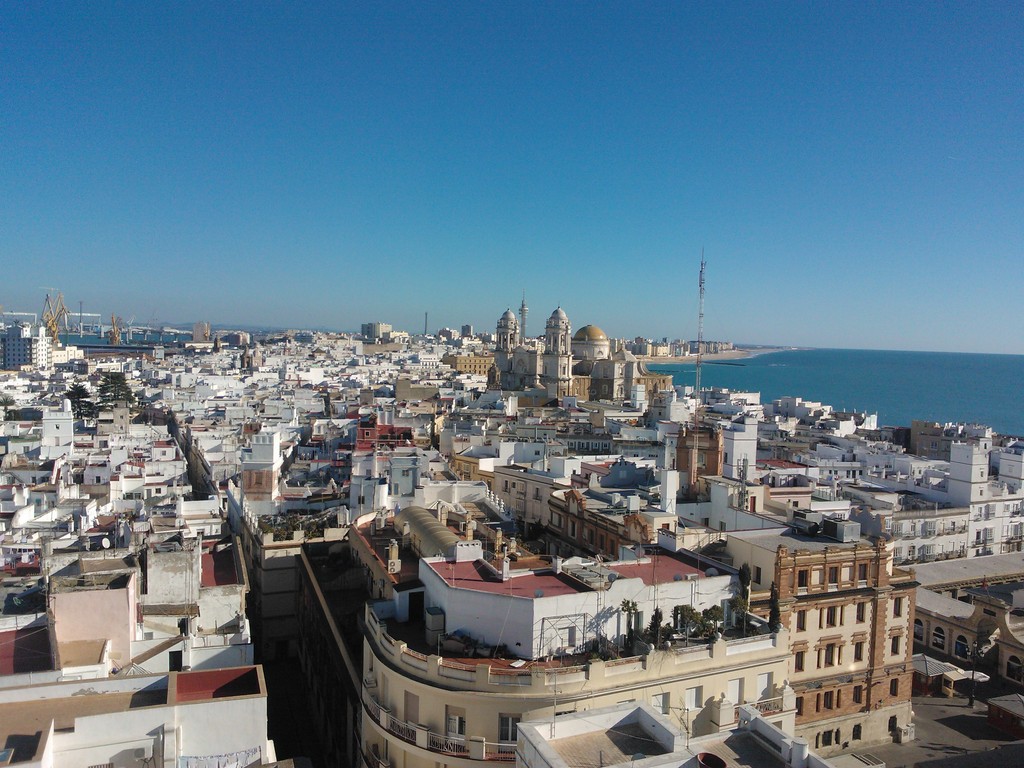 There are four floors to stop on in the tower, the first has many posters and videos about the history of the camára oscura and where you can find other such cámara oscuras in Spain. There is also an explanation about how the cámara works, as well as a short video playing on a loop on a television about the cámara oscura, next to the handy little vending machine, just in case climbing all of those stairs has made you thirsty. The next floor up is more interesting as it has large windows that offer a good view of Cádiz, the walls in this room are dedicated to the history of Cádiz, including a section on Las Cortes de Cádiz which would have been useful to have read before one of my exams last week, but never mind eh! After a little persuading we convinced Claire to head up another flight of stairs to the Cámara Oscura landing, but as it was not time for our show we had to head straight past the door into the cámara room and up the final set of tiny spiral stairs onto the roof of the tower. 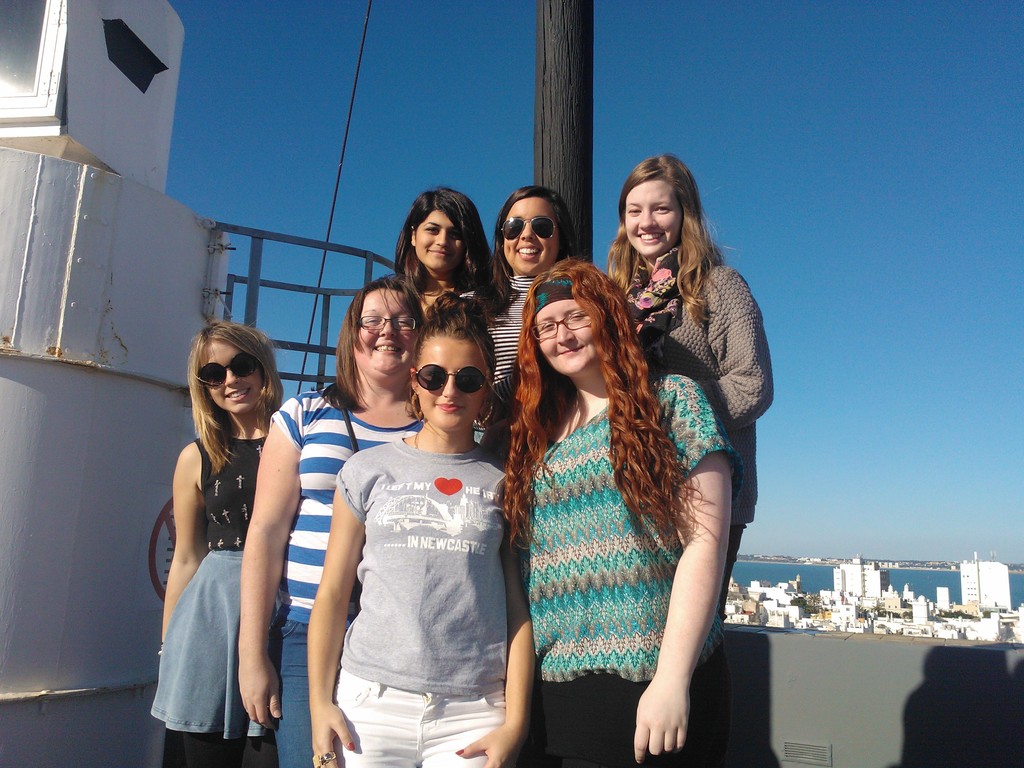 We stepped out onto the small terrace on top of the tower and were greeted with a wonderful view of Cádiz, especially as it was such a beautiful clear day – definitely worth waiting for. We walked around the terrace taking in the views, spotting our own houses or places that we usually go, Cádiz looks a lot bigger from up the tower than when you are walking around it! We also took a few photographs of the views and each other as it was such a nice day, and to prove to everyone that we actually managed to get Claire up there. The walls are quite high and thick though so it was very safe, although I would not advise doing as we did and sitting on the walls to take photos, that gets a little bit precarious. We had plenty of time on the roof to admire the view and soak up the sun before a woman came up to announce that the next cámara oscura show was starting and we had to head downstairs again. 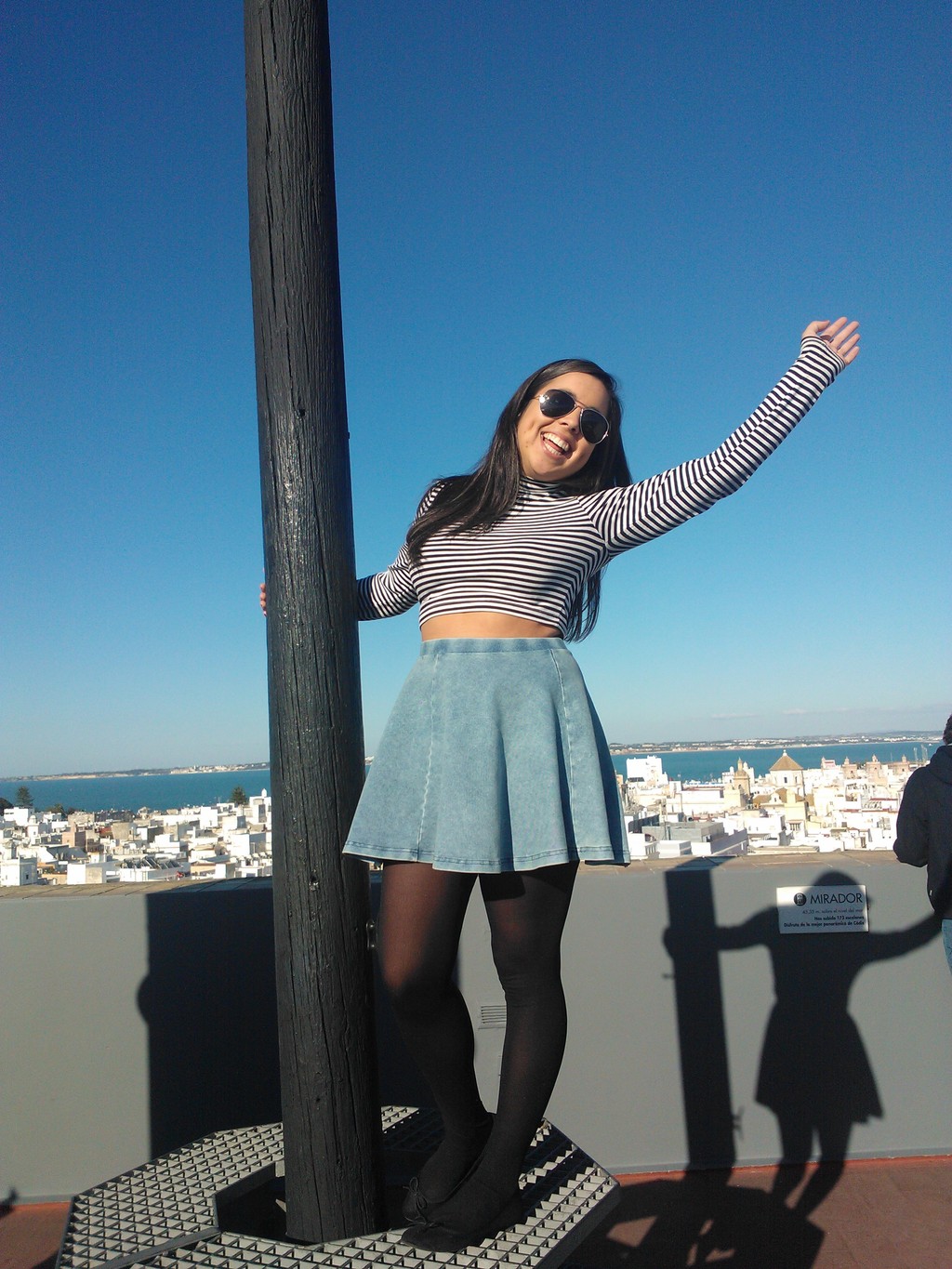 We entered the black room with blacked out windows with a circular canvas in the middle of the room surrounded by a metal rail, the room was lit only by a lamp. We assembled around the large canvas and waited whilst the talk host closed the door and checked what languages were needed for this particular show. She then turned off the lamp and we were plunged into total darkness until she opened the mirror and the image from the cámara oscura was projected through lenses onto the canvas. We were then taken on a 360 degree tour of Cádiz, which was really cool to see through this medium, the woman used the lenses to zoom in and out of things, the clarity of the picture produced by the camera was stunning. The woman pointed out interesting things in Cádiz over the tour but I found that the host that I had last time I visited added a bit more personality to it, although she did try and did very well switching between languages with ease. The show lasted around 15 minutes after which the light was turned back on and we headed down all of the stairs and out of the tower, we could have revisited any of the other areas had we wanted to, but felt it was time to head home.

It was a lovely way to spend an hour or so, and very good value for money, certainly something that I would recommend doing whilst in Cádiz especially if the weather is good.

Do you know Torre Tavira? Share your opinion about this place.