Cypriot sweets and dessert! | Where to eat in Paphos

With so much discussion about the good food here in Paphos, Cyprus, that only leaves room for the sweet ending. By this, I mean nothing other than dessert for those of you with a sweet tooth! Now these desserts can be found in super markets and bakeries, and not so much in restaurants. I would say that desserts in restaurants tend to be adapted to the taste of the tourists, like cakes and all that. Otherwise, they’ll just be offering fruits, but for people like me who loves calories, we look for something with that little extra edge. 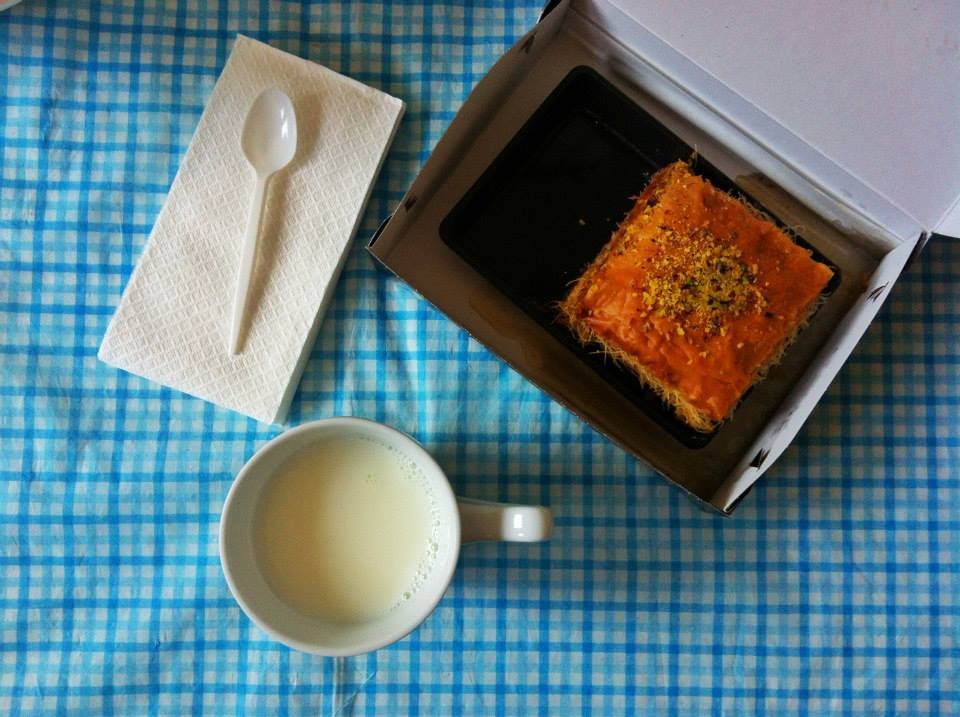 Let’s start off in a cooler place, not in the mountains but in an air-conditioned mall, King avenue’s mall. This mall is quite new so i will just take a few moment to talk about what it has:

So for the food side of the equation, there are restaurants from bigger chains like Tgif friday’s, Burger King, Taco Bell, Pizza Hut, Cold Stone and Wagamama (japanese cuisine but if you really know japanese food you won't particularly enjoy it, do not get the curry).

There are also two big coffee shops that are literally meters away from each other, being Costa Coffee and Caffe Nero, both with decent outdoor terrace for you to sip your beverage and watch the busy street of Paphos heading to the beach.

But since we’re talking about sweets and desserts, there’s only one place in the mall to go to. This place is actually just on the left hand side of Cinnabon and you will be able to see it quite clearly as a place that sells what we refer to as cypriot donuts. The official name, however, is loukoumades, and they come in little balls, like on the photo below. There are now many variations of this, but the core of the donut never changes. There is one flavour, which is plain, but what ever toppings you want on them will be the real elements that change the flavours.

Once again a little history of loukoumades is appropriate here. The origin of these deep-fried pastries does vary, but it’s safe to say that it originates from the what was the Empires of the Greeks, the Ottomans, and certain parts of the middle east. In Greece, they go by the exact same name as here in Cyprus, which is loukoumades. Myths and historians also have it that way back when the Olympics was a massive annual event in Greece, these loukoumades balls were offered to the winners of the competition, as like some sort of a token i suppose. In turkey around, they’re called lokma, so if you’ve visited turkey or have tried lokma, chances are you’re no stranger to the variation here in Paphos. They are traditionally coated with sugar, cinnamon, syrup and/or honey and other similar ingredients. And there we have it for our history lesson on these traditional balls of delight. 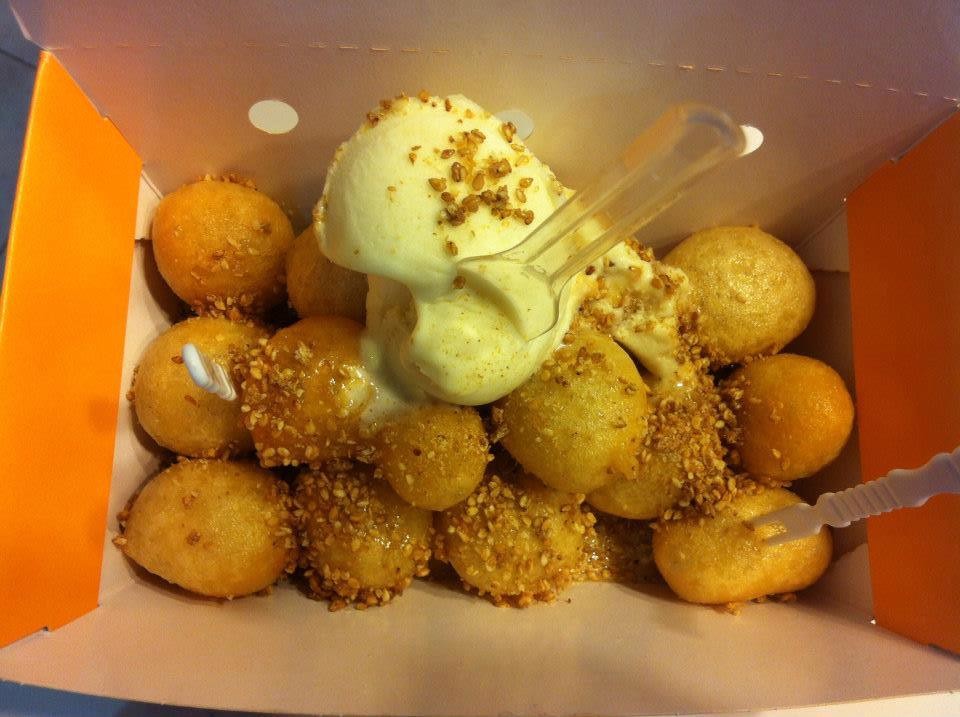 My mom is not a massive fan of sweets or desserts, but she just occasionally enjoy her fair share of vanilla ice cream, roasted nuts and drizzles of honey. I would say that this is a more classic take on these loukoumades balls, maybe apart from that scoop of vanilla ice cream. 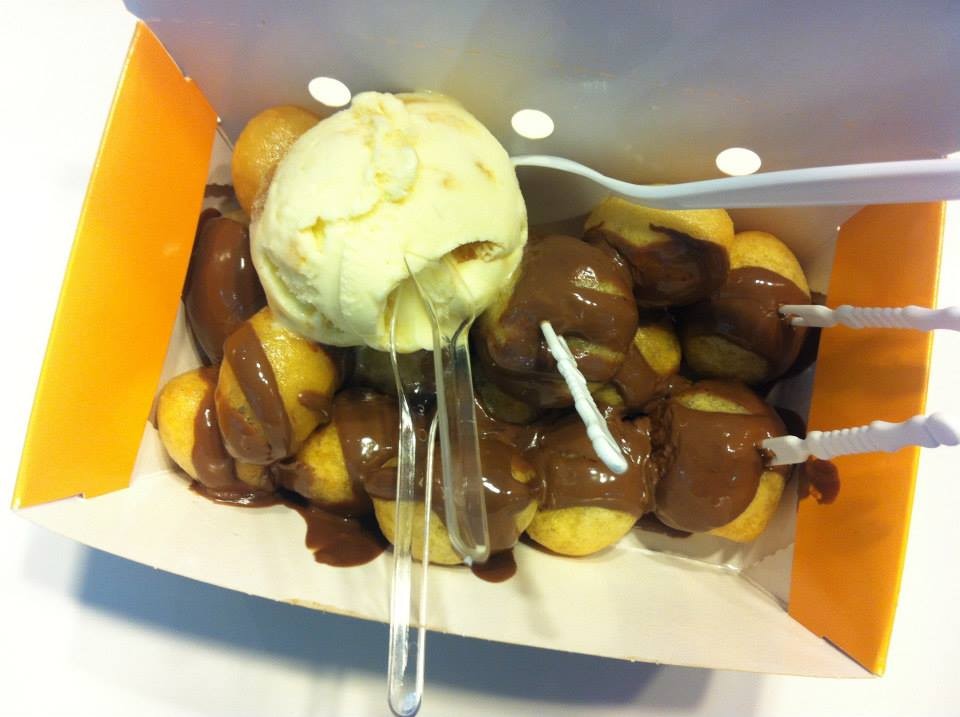 As for me, since i am young and am more tolerant to sweeter ingredients especially those with higher calorie count, I went for the unhealthy version with a super thick, super rich, and super sinful milk chocolate sauce. The sauce was nice and warm and was a definitely plus to the fresh loukoumades. The chocolate sauce wasn’t enough though. I didn’t stop there as i also treated myself to a scoop of the vanilla ice cream as my mother did. The ice cream melted quite quickly as it was sitting right on top of the hot donuts and its sauce. Anyhow, they are absolutely delicious either as a dessert or as an afternoon snack with a coffee, and the best part is that, you don’t have to be an olympics winner to be eating them!

Moving out from the mall now, we're going into the so called convenient stores slash bakeries. There is one just very close by The three little pigs kebab shop that i talked about last post, right along Tombs of the Kings. They are open until very very late at night, so if you've had a few drinks and want something sweet to soak up to alcohol or fruit juices you've had, then head over here. I can't recall the name, but it's on the opposite side of the kebab place, and you can get everything here from chips, to soft drinks, to even milk and yogurt and surprisingly birthday cakes. Oh, I left out the main part of this post; you can get traditional cypriot sweets here. 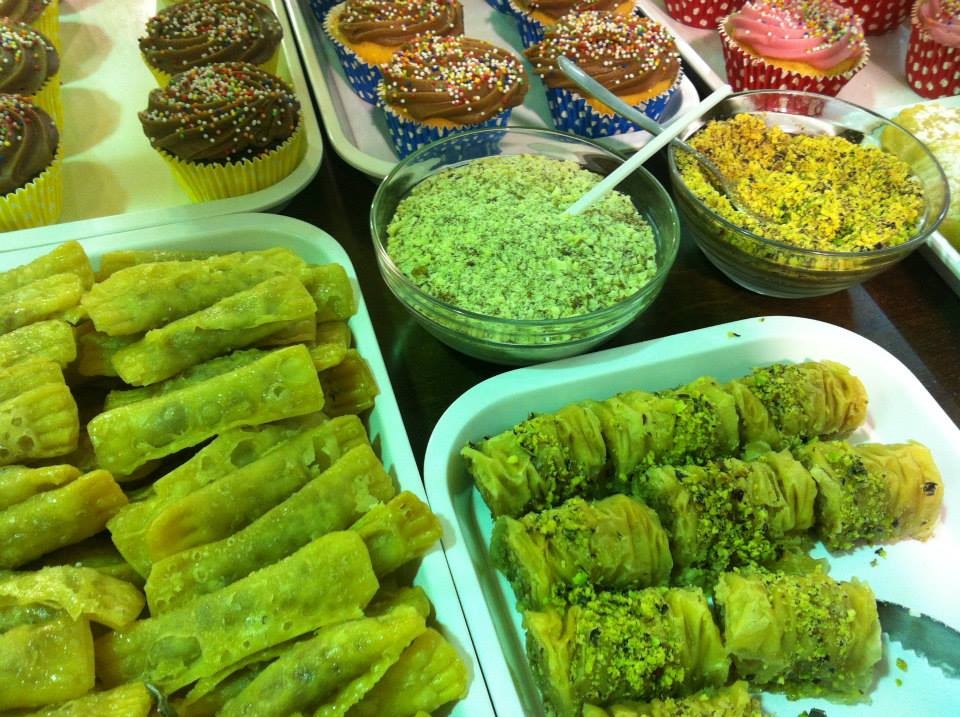 So what do i mean by cypriot sweets? Some of you guys may already be familiar with some of these, since Cyprus has a rich history of trade and war and colonisation and all that with many of the countries in the region. For example, they have baklavas here, but they go by different names depending on its shapes and ingredients. So i love baklavas and have praised them on more than a few occasions here on my posts. The baklavas you get in these bakeries are quite different, because i find them to be less sweet but a lot more aromatic. I don't know what the smell is, but it smells very clean, like that floral aroma you get when you're eating a fancy cake with edible flowers you know? You will come to realise that most of the sweets here, other than the common ones, are made from pastry sheets with stuffings of various nuts and drizzled with syrup or honey. This is quite common in Paphos and are very easy to find. Otherwise, you've got the common treats, which are your ordinary donuts, croissants, pain au chocolate from time to time, muffins, cupcakes, and all that. 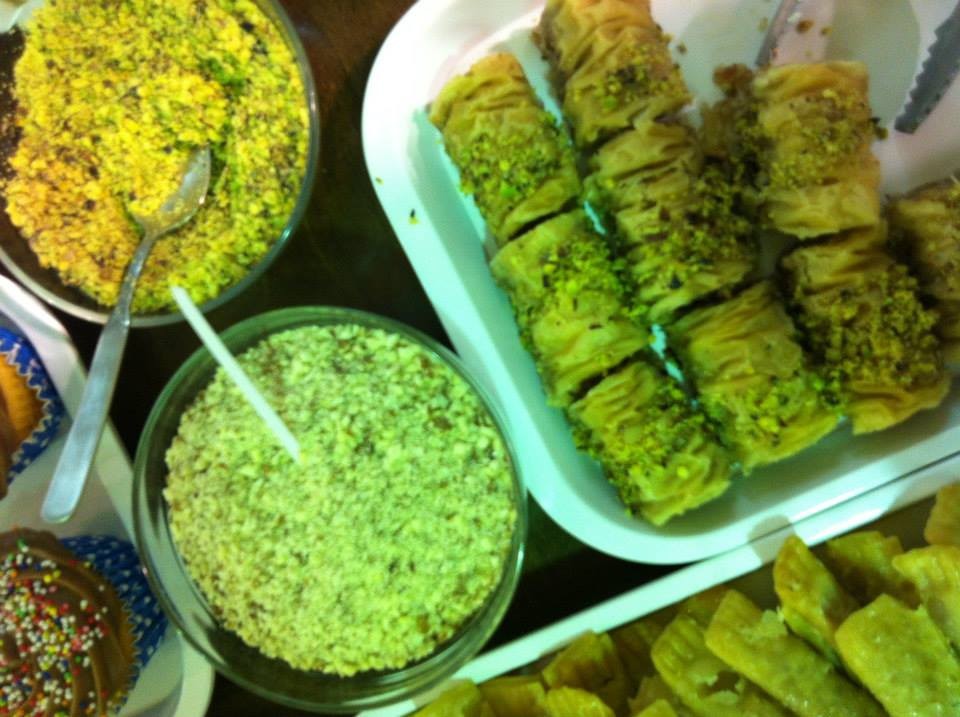 What i find really cool is that fact that you help yourself to your desired sweets, then when appropriate, you could add more crushed nuts! As you could see down below, there are two bowls filled with what is one ground pistachio and the other something like peanut or walnut but probably the latter, and you can top this over your dessert. It's almost like an all you can eat thing, but the trick is, when you pay, you pay by the weight of your item. So if your actual slice of baklava costs you, say €1. 50, and you add a kilogram of crushed pistachio, then you'll probably be paying a lot more just for the extra topping. So this is how it works and if anything, it's a very cool concept that lets you determine your own destiny!

What if you want to find something that's not cypriot? You're also in luck because in town, there are two Lidl supermarkets. I won't talk about the types of products they have here at Lidl, but i will talk about their bakery section. I don't know about the other location, but i am 100% certain that the one on the road towards coral bay has freshly baked goods every morning. If you head over to lidl earlier in the day, you will get pastries and breads that are fresh out of the oven. The smell of baked goods just floats around the whole supermarket, and that pretty much forces you to at least walk over to this section. The prices are also amazing. You can get croissants and pain au chocolat for under one euro. They have many different things from a simple butter croissant, to a chocolate croissant, a chocolate + almond croissant, a ham + cheese croissant, an apple turnover and baguettes and many more.

If this post has been interesting and has triggered the fluids in your stomach to go jumping up and down, then you'd absolutely love what else i had to say about the dining experience in Cyprus. If you're not keen on clicking away to my previous posts, then i will make a quick recommendation here. For a traditional experience in a greek cypriot taverna, head over to Moutallos squarefor Stavros Taverna Geroskipou. If you're up for something a bit more low key, a bit more young, a bit more hip, then stay by Tombs of the Kings road and make a trip to The three little pigs for a simple kebab or a mix platter of grilled goodness with salad, french fries and warm pita bread. If you're up for asian food, avoid disappointment of ''okay-tasting'' food and head over to Baan Thai Kitchen in Kato Paphos just beside Debenham's shopping centre for delicious authentic thai food. With these pieces of advice, you should be living comfortably and eating very well during your time here in Paphos, Cyprus! Bon appetit!

Do you know Cypriot sweets and dessert!? Share your opinion about this place.

View all Erasmus in Paphos