La Torre de la Horadada | What to do in Alicante

La Torre de la Horadada is a beach town located on the Mediterranean sea which can be found in Alicante, and belongs to the Pilar de la Horadada municipality. However, it is very close to the Murcia region, just above the beaches on the Mar Menor, this leads to many people from Murcia thinking it is a part of the region (I thought the same when I was younger). It takes a shorter time to get there than to other beaches in Murcia, and lots of people from Murcia have holiday homes there. 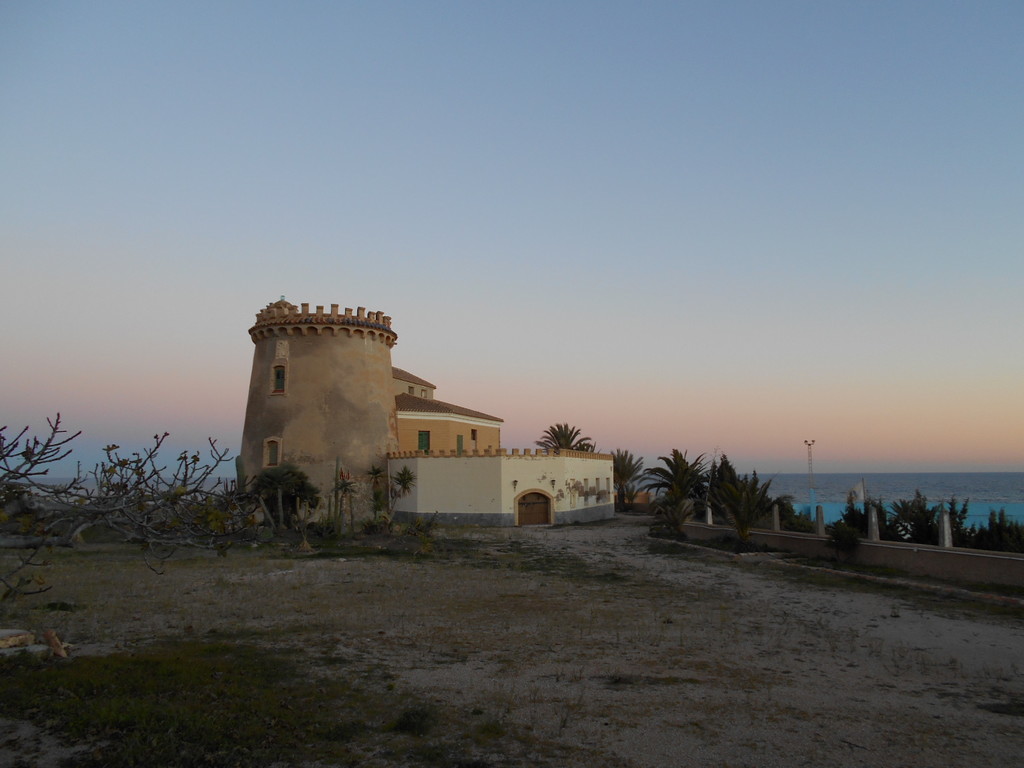 I am going to tell you about the pretty beaches in this town and the tower that is right on the beach. In fact, the same of the area comes from this tower and the location where it is built... because the land around it is full of holes.

The festivals in La Torre de la Horadada take place in the middle of August, and the popular Romería de la Virgen de la Asunción is the 15th of August. For the younger generations, during the evening of the Romería festival, it is normal to go to the beach with friends and have a BBQ and have some drinks.

The area is known for the lookout tower there, as well as its beaches. The tower is located between the Conde Beach and the Puerto Beach, on a ledge built above sea level. This tower dates back to the sixteenth century, and served as a watchtower during the rule of Philip II against the pirates of the Mediterranean Sea. The tower is cylinder shaped and has several windows. There is a house attached to the tower, which is how you can access it. I think it doesn't serve as anything important at the minute, and belongs to the descendants of Count de Roche. I have never entered the tower but I have had many conversations discussing its history and use whilst gazing at it from the beach. 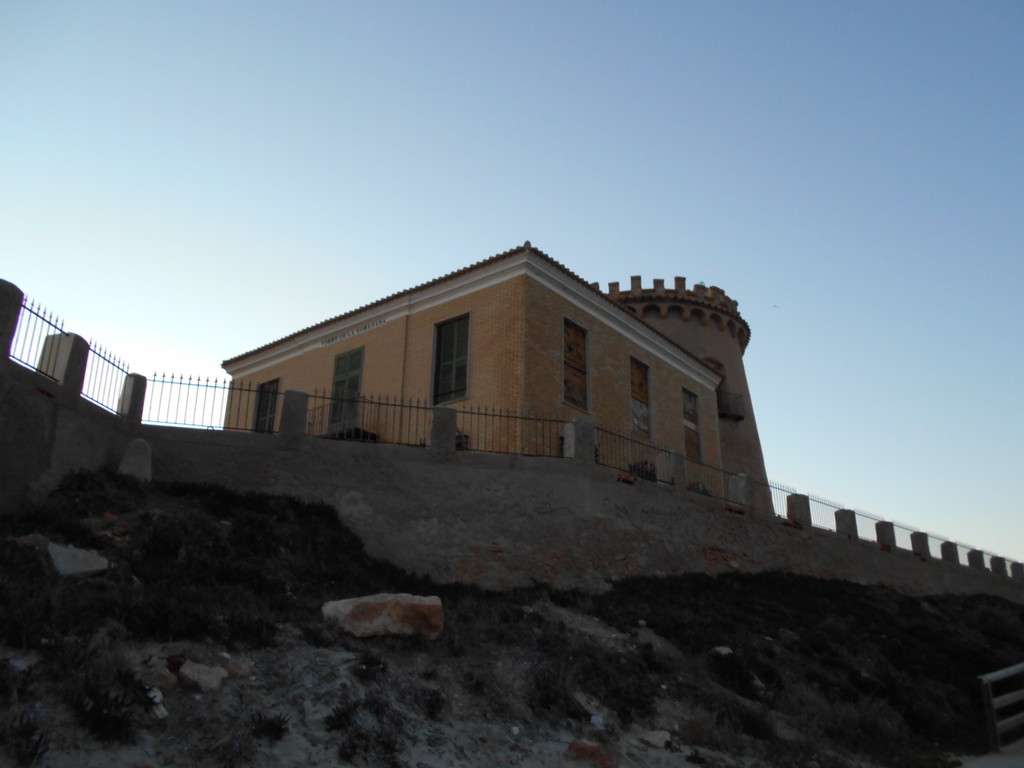 By the way, you might have never been to the Torre de la Horadada, but you might have seen it printed on some famous bags of crisps called "La Torre de la Horadada". They are the best crisps I have ever tasted and you can buy them both locally and in the rest of Murcia and Alicante, I don't know if they are sold in the rest of Spain, but they should be.

The church in Torre de la Horadada is very popular and is called the Church of the Assumption, after the patron saint of the town. Thanks to its high tower, it is also a good building to find your way around. It is quite impressive and a symbol of patriotism, because of the red and yellow colours of the façade. I have never seen the inside, but there are lots of grassy banks that surround it, and it is very normal to see people sitting on benches during the summer. They go there to listen to Mass, either because it is full or too hot inside.

Firstly, if you need to buy a lot of things, either for a barbecue or a picnic, you have to go to Dialprix (which used to be Super Valu), located at the entrance of Torre de la Horadada.

On the other hand, if you want to eat out, most restaurants and ice cream shops are located in Plaza del Pueblo Latino and the square near the Port.

The Plaza del Pueblo Latino is also a small shopping arcade which consists of bars, bakeries, ice cream parlours and two mini supermarkets. In the centre, there is a mini square with benches and water fountains, giving a nice touch to the area.

On the other hand, the other square is a few meters from the Pueblo Latino, which is a lot bigger. It is located right between the Church of the Assumption and the watchtower and the Port. The highlight of the square is the terraced restaurants which are always full of people, especially 'Guiri's (even in winter). There is a road that runs along one side of the square, but in general it is pedestrianised. In the centre of the square, there are benches, trees and a water fountain. There are also little horses for children, and in summer, a waffle and crepe stand which normally always has a queue.

In one of the streets that goes from the square to the beach, there are two ice cream parlours and Bar Willy. The Galán ice cream parlour is the most famous in the town, thanks to its unique flavours, I would recommend the cookie ice-cream or the chocolate crepe ice-cream. Right next door is an Alicante ice cream shop, and I always get the nougat ice-cream because it is so yummy!

The two ice cream parlours have terraces that extend onto the promenade, boasting great views of the beach, the port and the lookout tower. So I recommend you go there for a beer and some 'patatas' in the afternoon, or during the evening for a good ice cream and milkshake, I love it. Although there are times when the tables are full and have to wait or take the ice cream away; another option is that you sit on the banks of the promenade with your ice cream or eat it whilst walking... but you save some money taking it away rather than sitting at the parlour.

From there, you can turn right and walk right along the promenade which is really nice. There are benches to sit every few meters and some sweet and ice cream stalls. During the night, it is usually full of teenagers. 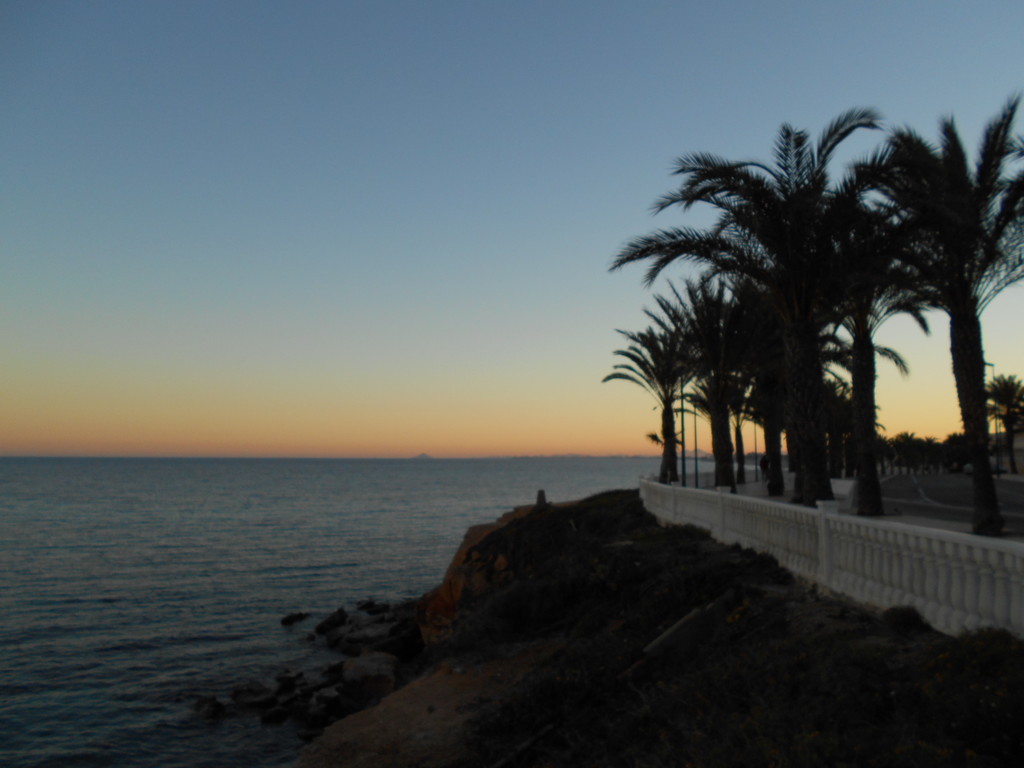 With regard to other leisure activites, I know that they are two summer cinemas, one in Las Villas and the other just next to the Plaza. They are only in use in July and August.

To me, La Torre de la Horadada is one beach, which is split up into smaller beaches. Going from left to right, here are the names of the beaches. 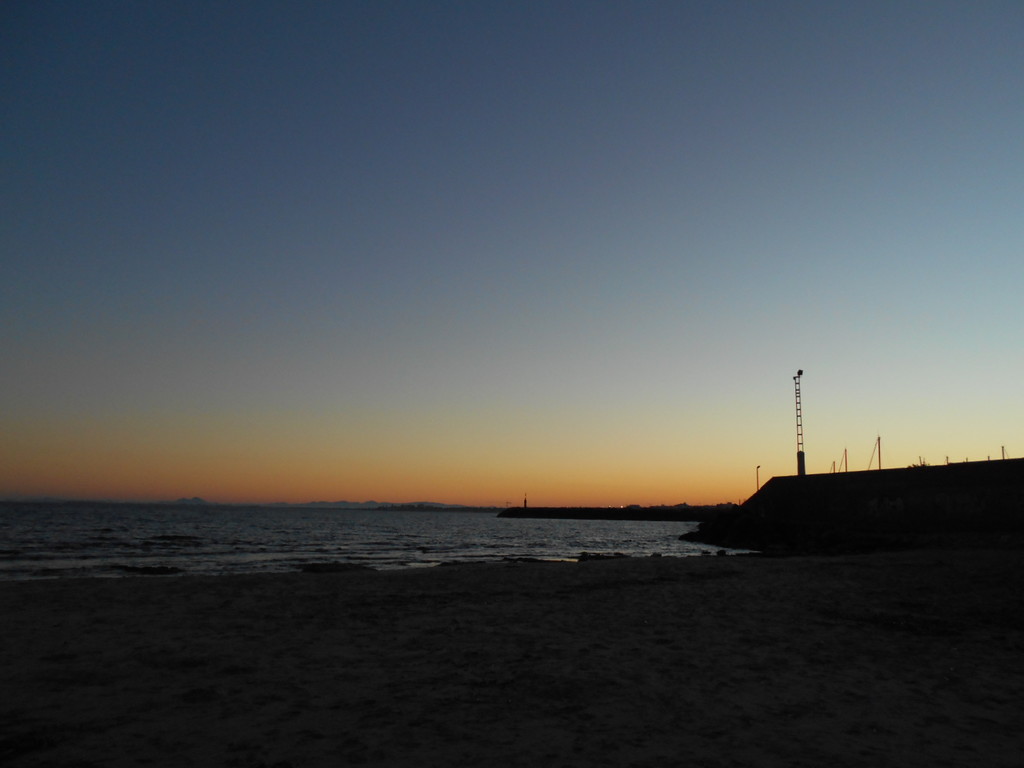 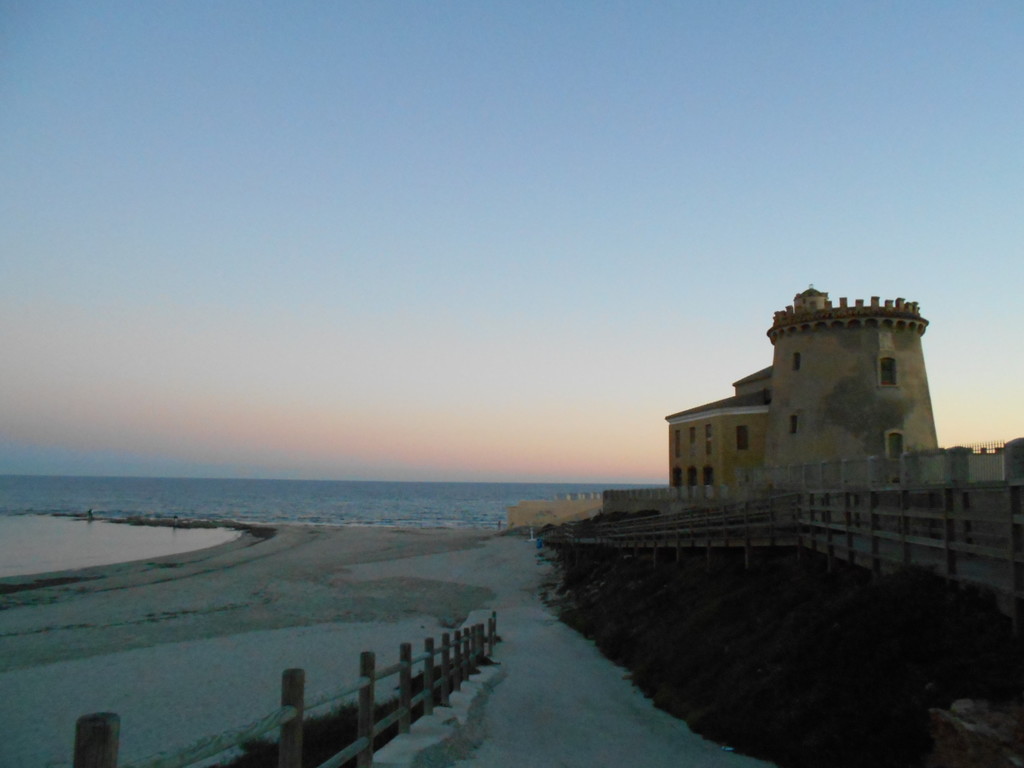 I am quite biased because I have spent many summers here, however, because of the number of people who go there on holiday, it must be quite special!

In general, the beaches are nice, and usually clean. It has a variety of restaurants, ice cream shops and cinemas in summer, and the promenade in the evening is wonderful. The ambiance of the town is lovely, and the people are welcoming, and you feel like home there. And as a big waffle fan, enjoying one in the square is my favourite thing ever. 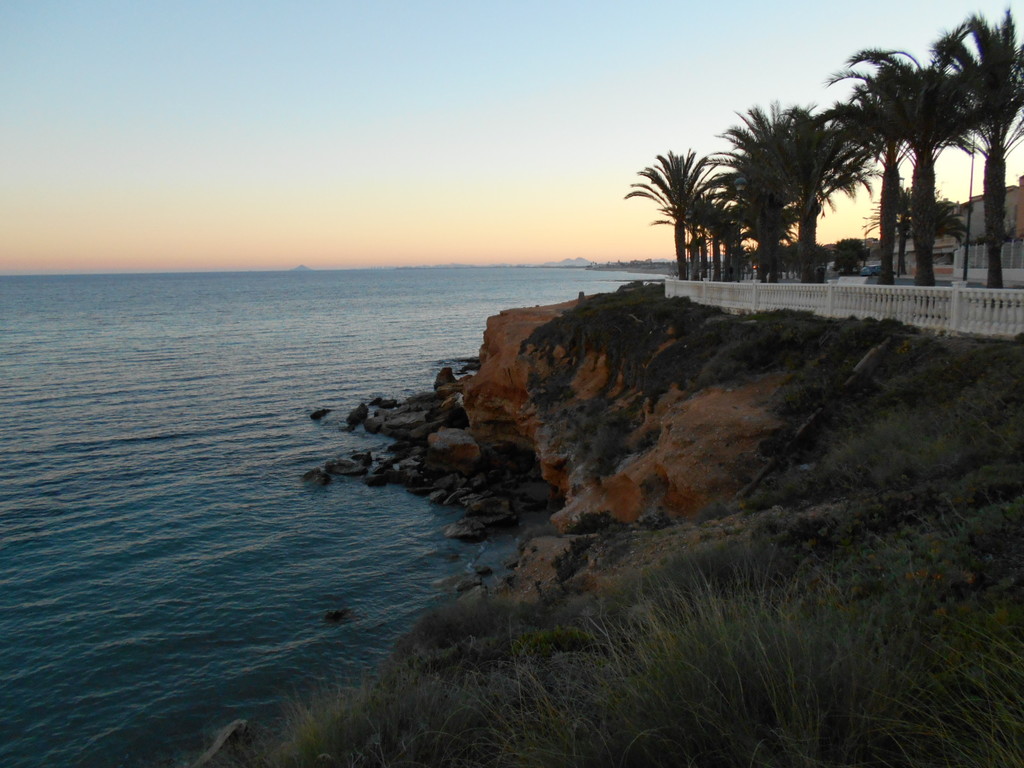 One of the only downsides to the town (as someone who has spent more than 15 days in a row there) is that it needs more lively bars, maybe a club. You can get bored of doing the same thing there if you're there for a long time, unless you have car and you can go to another nearby beach or one of the shopping malls on the outskirts (La Zenia and Dos Mares).

When I've gone, I have rented house with friends or stayed in one of the hotels there along the beach next to the port. If you want to spend the weekend there, you can rent a house or even stay in the hostel. The hostel is very average, but is the only one in that area. It is called "Vistamar", it has a restaurant, and night per person costs about 35 euros, it is best to ring up and reserve a place before you go.

There are two options to get to La Torre de la Horadada, car or bus.

If you decide to get the bus there, you have to get it from the bus station in Murcia, which is in San Andrés, a little out of the centre of the city. There, you will find the LatBus office, which is the company that operates buses in this area and buy a ticket for the 70 line 'El Pintar-Murcia'. Get off at the la Torre de la Horadada stop, and it costs around 4 euros. They will tell you at the station which platform it leaves from.

They have a different time schedule for summer and winter, and you can ask for a printed version from the office which you can keep (I recommend you may keep it for the return journey or if you want to go on another occasion). If you want to go in August, I recommend that get there 15 or 20 minutes before, since this is when it gets quite busy and you might have to wait for the next one which is usually 45 minutes or 1 hour later. And, depending on the letter bus you take (either 70a, 70b,... ) the bus will stop at different stops along the way so it might be shorter or longer.

If you are driving from Murcia centre, the best thing to do is take this route. Take the A-30 from Ronda Norte towards Cartagena; Take exit 158 ​​to C-3319 and continue on the RM-19. At the roundabout take the first exit. After, you have to join the AP-7 ramp toward San Pedro del Pinatar / Alicante. When you see the exit 774, come off towards San Pedro del Pinatar / Pilar de la Horadada. At the next roundabout, take the fourth exit towards the N-332, and at the next roundabout take the first exit. At the next roundabouts, take the second exit, and then the second again. Come off at 'Paras' and continue along Avenida Velera, until you reach the beach area.

Do you know La Torre de la Horadada? Share your opinion about this place.

View all Erasmus in Alicante