During the summer time, many poeple start to prepare their holidays and organise their plans to enjoy some great moments near the beach or in hotels, everyone likes surely something different and a special characteristic about a country or a place that motivates him to go visit it and enjoy its amazing views and landscapes. I had one time the desire to discover a famous paradisiac place in the south of the country called Jerba, this island is called in arabic language jaziret ahlem meaning the paradise island because it offers the best quality of beaches with crytalline water very cleat to the point of seeing our feet inside water and seeing also very little fishes inside that would come with curiosity to discover our bodies. I went actually during an excursion to Jerba with members of my family and we decided to go to the extreme south of the country first by bus from the capital Tunis in the station of Beb Alouia that costed us at that time 35 tunisian dinars. The atmosphere inside the big bus was very festive and our group was doing much noise, we were singing and loughing, doing jokes and dancing, the bus was really upside down by our crazy mood even the driver was very pleased to have such energetic group of poeple that were there to enjoy of moments of their trip to the maximum. Once arriving to the extreme coastal part of the south, we had to go out of the bus and wait for a special boat where even cars could also go inside to assure the cross of the sea to the beautiful island Jerba. Jerba is actually a small island and an amazing resort for many poeple, it is a famous place where the newly married couples in general spend their honeymoon, it is very calm and romantic and can be an amazing destination for poeple that like nature and deserted romantic areas. 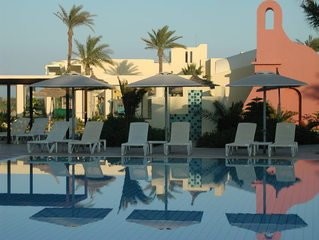 Arriving in our amazing island, we could enjoy the landcape of kilometres of white sand with a so clear sea more clear than the blue sky, the houses were very typical with amazing facades and beautiful view, we could finally reach our hotel to spend the night with the animation they offer and by tasting the most delicious dishes. In the morning we woke up early to do some walks inside the city because we liked walking a lot and we arrived to a a main avenue where we could distinguish a jerbian bride that was going out from her home to be received from the hand of her father to the hand of her futut husband that will drive her in his specially decorated car to the town hall where they will marry in front of families. The bride was wearing special traditional clothes and not the white dress like in the capital tunis, she was wearing a lot a lot of gold because the jerbian woman are known to like the gold a lot and to be decorated by it, she was wearing like a hat on the head and a clothes white and blue and she appeared very beautiful to us and we enjoyed seeing the different in traditions between the capital and the intern cities. The city 's streets are very nice to do a walk in the morning and to discover more the place, we could see very much beautiful homes and various grocery stores. In fact, we discovered after that the people living in this small island have a special relation with commercial affairs as many poeple have shops or are owners of stores that offers all the needed stuff for homes, then we discovered that this spirit of negociation, of commerce and selling and buying is a characteristic of the inhabitants that goes after to the capital tunis to exerce also this job there as well.
After walking inside the city an amazing smell of the city made us with much desire to go to swim and try this amazing and paradisiac place, the blue color os the sea was attracting us so much and we could really distinguish that the fact that this place was far from the capital made it more clean, the air was pure and it was really worthy to go spend some amazing time there. 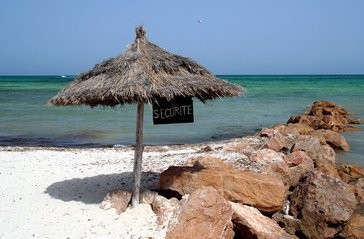 2-Pottery and creation of plates from clay

During our walk through the city amazing streets we could discover one of the most beautiful characteristics of the city ; a pottery shop where i could be a witness for an amazing and outstanding show ever a man that was creating from his own hands plates, glasses, kitchen ustensils from clay pow that he was creating in magical way, he foot was making the direction for the pottery machine that was turning around itself, the machine was very old and traditional but the man seemed enjoying it very much. The turning arounf into circles with the quantity of clay pow around could be created very slowly on a beginning of a bottle by the amazing hands of this man because he had the exact right moves, the wonderful and professional technique and he could create any form he wanted, the amazing skills he had offered us the most beautiful and harmonious creation, after some minutes the bottle became very well finished and the basic formation was then put inside very hot fire like to dry it in hot temperature, after some minutes, the ustensil was ready to be decorated, so the man converted into a painter and he started to give more spirit to the piece of art by decorating it in white color then he took a special small brush to drw some flowers, to even write arabic words and to decorate it in his own traditional style. He then proposed to us to try to do the first creation of a plate from a clay pow that was already prepared and i volunteered to accomplish this mission it was so much amusing anf funny because it really had a special technique and my friends started loughing because i did not knew the exact way of creating it, but in the final the man started to help me and to show me the traditional way to do the pow and to control its shape by the circular mouvement the machine does, it was breat for us to try such an experience and we were really so much excited to learn this exceptional activitiy that remains until now inside the city streets as a traditionl way that did not loose its authenticity. 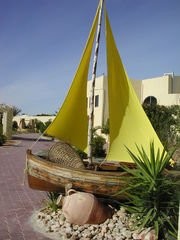 The tunisian deserted island is known to be constituted from a percentage of jewesh poeple that are tunisian but pratice this religion, they even visit their religious temple such as the ghriba synagogue where people came from all over the world to practice freely their own religion although they are in a muslim country but we beleive that everyone have his own religion that he can practice freely. this population is now moving to france and to european countries. Appearently there is a special even in the month of april where poeple gather toghether and they pray to God and realise their own traditions.

4- The beach and hotels

The hotels in Jerba are really worthy for a stay in summer days because they offer great quality services, much organized and tidy rooms with good quality of cleaning and amazing buffet full of mixed food for every one to taste and to enjoy, so the grown up and the little kids have an amazing time there, poeple could enjoy the clear water, the others were trying to surf while the waves were not so big and some other families decided to try to play by the water games like tour in jetski or some boat tours also, the resort was like paradise very beautiful and with the most amazing site seeing, the kids were playing with the white sand and constructing castles and the parents just layed in the shadow of their umbrella and admiring so much the beauty of the water and the sea.