Remember in the previous post I spoke about Zagreb’s view? I can truly and whole heartedly say that Zagreb’s skyline doesn’t even hold a candle to Budapest’s skyline; and if you ever get to visit Budapest and Citadella, only then you will realize what I'm trying to say because no matter how many different adjectives we use there is just too much beauty in the world to be contained in words. Okay I’ll stop being poetic man, the truth is this place is mesmerizing, there is just something about watching the city lights from the above, the beauty of Danube as the boats keep sailing in it. The monumental buildings, the parliament, the basilica church, the bridges and a hundred other small buildings that may not catch your eyes…

I'm trying to stop being poetic but this place just carries so many good vibes and the view is so spectacular that I think if I were to choose my favorite spot in all of Budapest, this would be it. Let’s take a look at Citadella’s background and see how we can get there from the inner city. 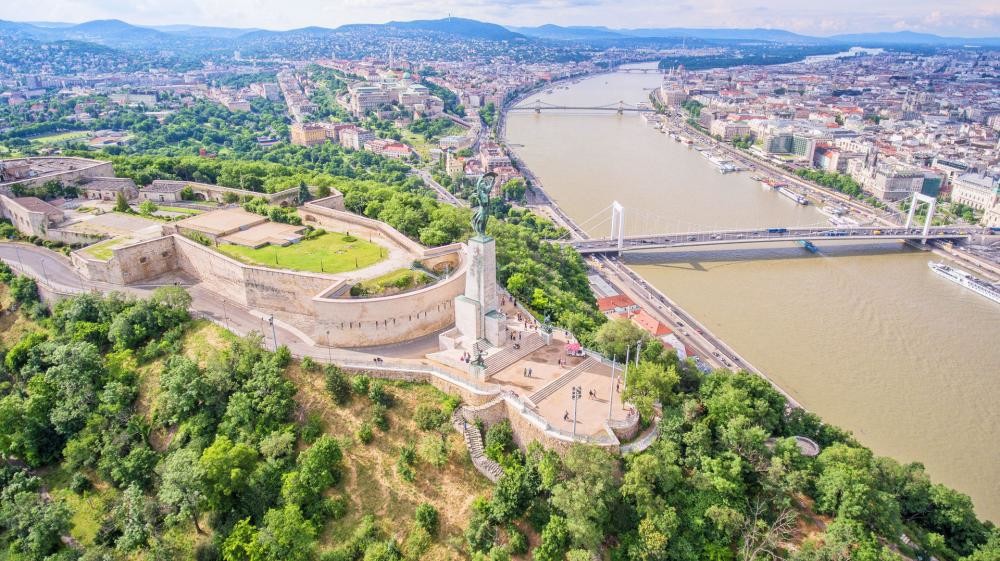 So citadella is a fortress which is located on top of Gellert Hill. It’s interesting to know that a place that is now only offers you beauty, a spectacular view and nice work out up the hill was once a military base. I'm not going to get into details about the history of the Citadella but that it was made by a Austrian Emperor after the Hungarian revolution in 1851 and it contained 6 cannons! I know, the cannons were basically there as a weapon of mass destruction upon this beautiful and sacred city. 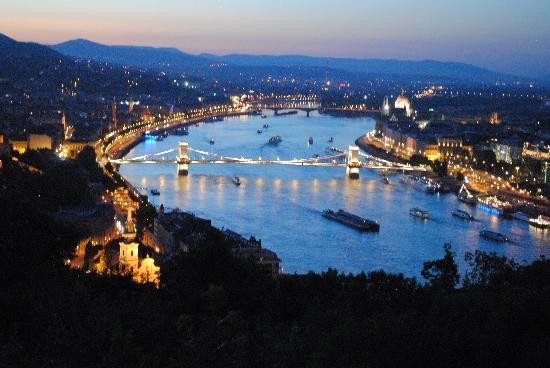 All that aside, the first thing anyone notices when looking up towards Citadella is the tall statue of a woman holding something that appears to be a leaf. The statue can be seen from anywhere, even when you’re strolling next to the Danube.

So what’s the story behind it?

This statue is actually the “Freedom” statue of Budapest, it kinda reminds me and I'm sure thousands of others of the statue of liberty in the US. Anyhow like I mentioned above, the Citadella was constructed by Austrians in 1851; Austria and Hungary had a lot of conflicts which in the resulted in the formation of Austro-Hungary. It was then that the Hungarians demanded the demolition of Citadella, I mean after all it was a sign of their oppression but the Austrians didn’t accept it. In 1897 the troops of Citadella apparently got tired or left (I’m guessing that’s what happened; it wasn’t mentioned why they left). When they left, in 1899 the Hungarians finally demolished the walls of the Citadella.

After the soviets took over Hungary, or in their words liberated Hungary from Germany in World War II; a sculptor named Marshal Klimient discovered an unfinished sculpture, the sculpture was made by a Hungarian sculptor for a son of the Hungarian governor who had gone missing in 1943. Klimient was a true soviet and he thought that the statue would be better off if it became dedicated to the Soviets who freed Hungary. And that’s how it happened. Today there stands a 14 meter tall woman holding a palm leaf in her hand, there are also two figures next to it which symbolize “progress” and the win against the evil; The evil being the german Nazis that occupied Hungary. 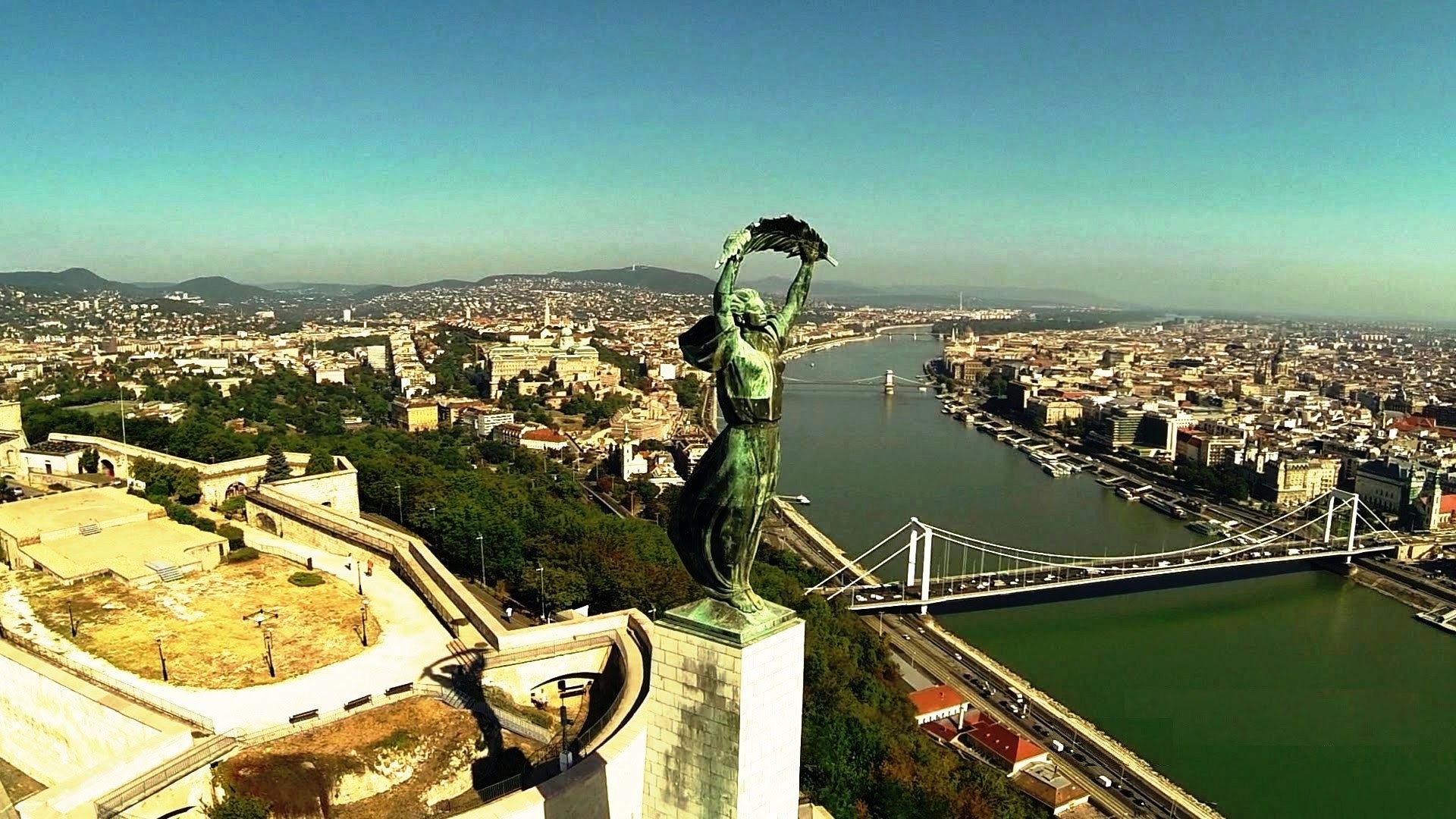 I would definitely suggest you guys to visit the Citadella near the sunset, when the sunsets you can see how all the city lights turn on simultaneously and watch the weak evening sun disappear into the orange sky. There are some small stalls there where you can buy a can of beer or some light snacks. If you want to stay there for long, I would suggest taking up some drinks and snacks; as it’s much cheaper that way. 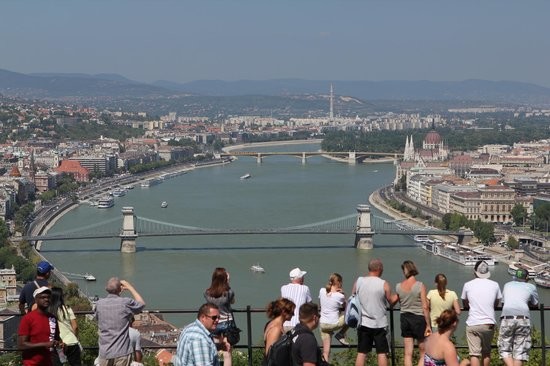 As for getting to Citadella, the easiest way is taking the tram 47 or 49 from Deak Ferenc Ter to Moricz square and then going up the hill. There is also a bus number 7 apparently but I have never taken it so I don’t know. I usually take the tram and it’s much easier. Anyways once there you need to climb up the Gellert hill, there is a pathway which is asphalted and easy to walk up to; there are also stairs that you can take. The stairs are slightly crooked but it gives you the sense of being in jungle and surrounded by nature and all that.

I genuinely think that you shouldn’t miss out on this place. Let me know what you think of it once you get the chance to visit.