In the heart of Barcelona (3) | Erasmus experience Barcelona

In the heart of Barcelona (3)

Leaving El Raval on the way to the Rambla, it is not possible to miss the most remarkable landmark of the district, as well as one of the very few Modernist masterpieces located in the Ciutat Vella (the oldest part of Barcelona). Situated just a few metres from the Rambla, Palau Guell is nonetheless still immersed in the atmosphere which characterize El Raval. Overlooking the narrow and dim Carrer Nou de la Rambla, indeed, the palace looks more austere than the other creations of Gaudì. It was probably for this reason that the police had no qualms in turning it into a prison and a place of torture after the Civil War. Nowadays, however, the palace has been restored to its former glory, and it is possible to visit the former dwelling of the family of Eusebi Guell, the wealthy merchant who patronized most of Gaudi's works. 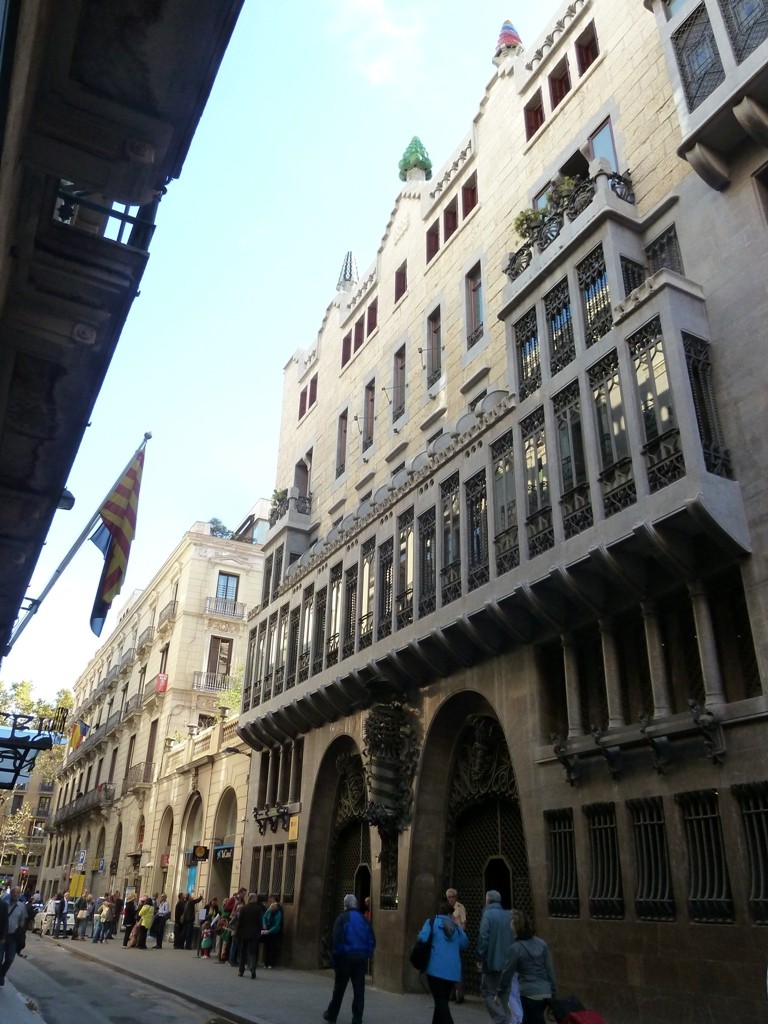 At a cost of 10 euro you can admire the spacious halls and fine stained glass windows which are found inside, having also a close look to the pinnacle and mosaics of the roof. As far as I am concerned, I contented myself with contemplating from distance the pinnacles, whose splendid and colourful shape is visible also from the street (number 4 and 9 of the pictures below).

Once back on the Rambla, I immediately abandoned it, crossing to the other side to head for Plaça Reial. Though not particularly wide (or maybe right for this reason), this colonnated square is permeated by a lively and delicious atmosphere. An oasis of quiet in comparison to the chaotic coming and going of the Rambla, it represents a good chance for a refreshment in one of the various bars housed under the porches. The enchanting ambiance is also brightened by the presence of a lively fountain and by the elegant street lamps who revealed to the public the genius of Antonì Gaudi. 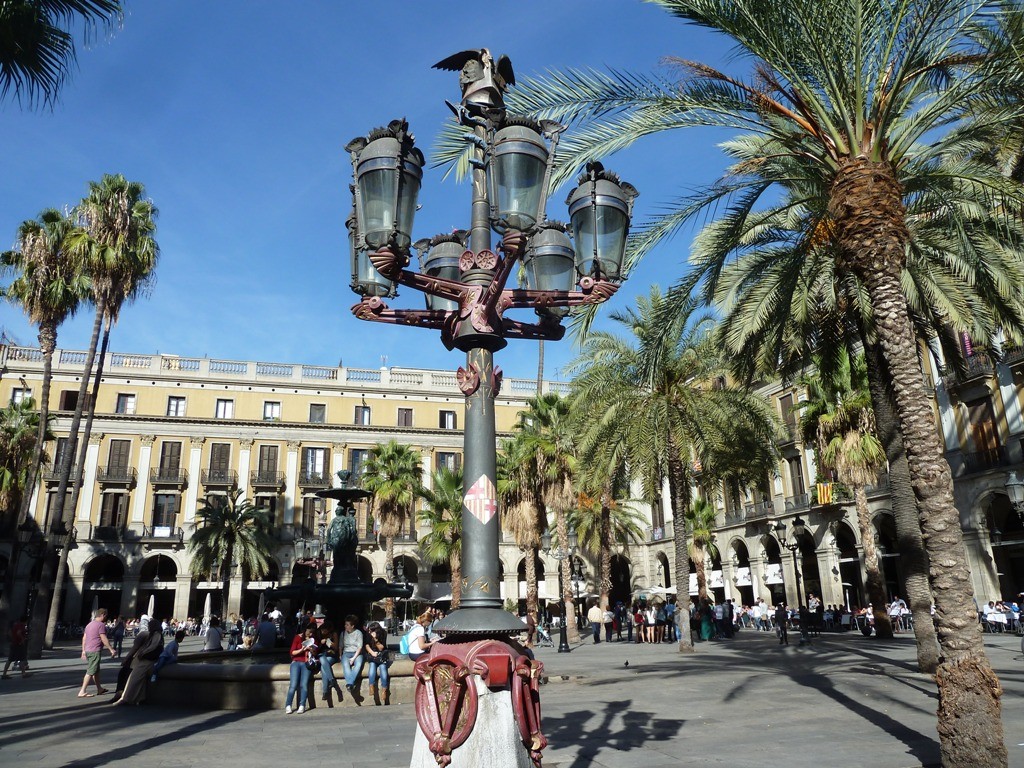 Leaving the square, I delved again into the swarm of people walking on the Rambla. Despite not being very fond of crowds, I must admit that merging with the human flow gliding in this special avenue is a really unique sensation. Standing apart for a while from this inebriating multitude, I could admire on my left (going towards Plaza de Catalunya) the modern and well-designed building housing the Gran Teatre del Liceu, one of the biggest opera theatre of Europe. My national pride received a consistent boost at spotting the familiar profile of Giuseppe Verdi on the posters placed in front of the theatre: it is remarkable to notice how also in Spain the second centenary of the great artist's birth has been celebrated properly. 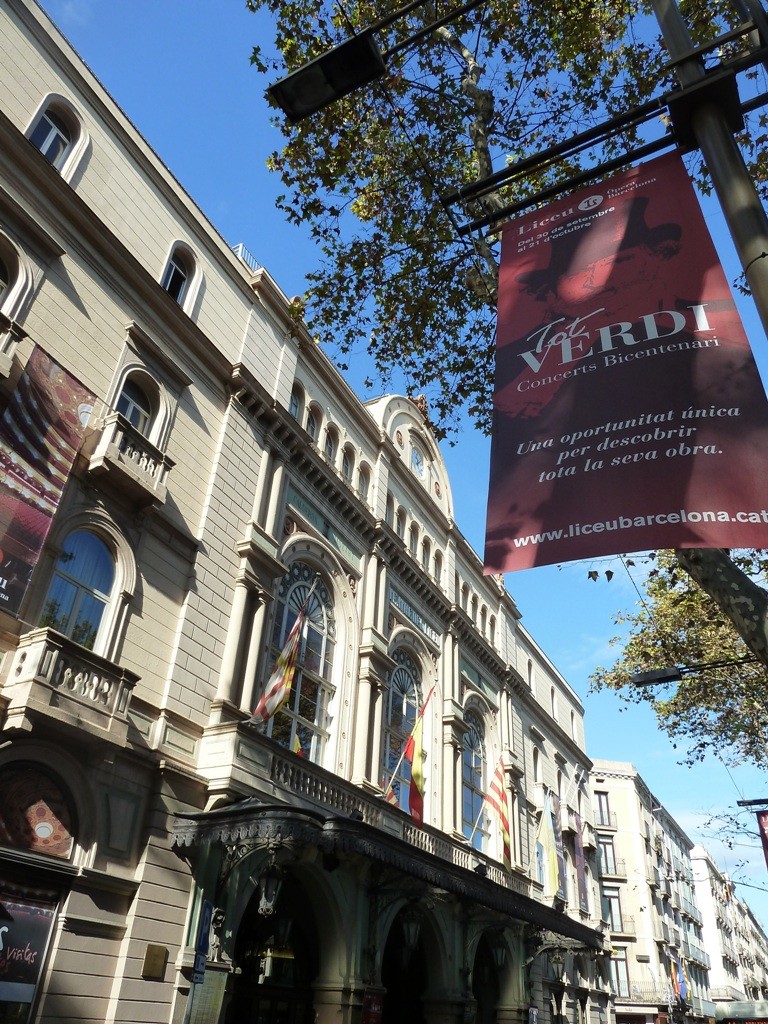 After a few minutes of immersion among people from all over the world, I finally reached the mosaic of Joan Mirò, where I parted company from the mass once and for all. Most people probably tread on this piece of art without even noticing it, busy as they are in catching sight of the various stands and stalls scattered on the Rambla or just managing to walk safely. And yet, the mosaic is a really fine work, unmistakably bearing the marks of the artist's style in the use of curve lines and uniform elementary colours. Standing apart from the madding crowd (as Thomas Hardy would have defined it) I admired Miro's work for a while and then patiently crouched to look for the artist's signature, which I finally found on a white tile. These few minutes I spent in calm contemplation on the Rambla, with people brushing against me on both sides, are one of the most vivid memories of my experience in Barcelona, reminding me that it is not possible to fully appreciate a place if going through it in a merely conventional touristic (or worse, consumerist) fashion. 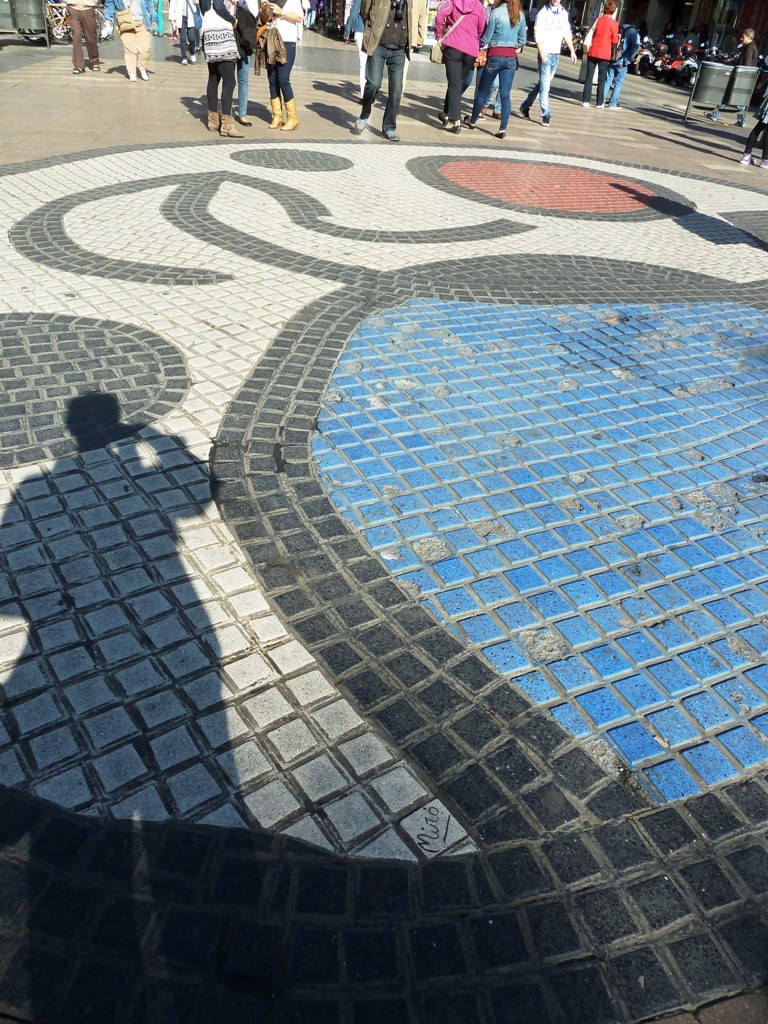 Turning into Carrer del Cardenal Cassañas, on the right side of the Rambla, I then penetrated the Barri Gotic (Gothic district) the heart of the oldest part of the city. The curiously curving street eventually leads to Plaza del Pi, where one of the finest churches of the city is found. The Gothic Esglesia of Santa Maria del Pi dates back to the 14th century, but according to a legend a primitive chapel was built in the 10th century, when a fisherman found an image of the Holy Mary in the hollow trunk of a pine tree. Instead of turning the wood into a boat as was his intention, he used it to build a chapel. Probably not by chance, a pine tree is still found nowadays in front of the church. The imposing facade of the church is made remarkable by the presence of the wide rose window, one of the largest in the world. 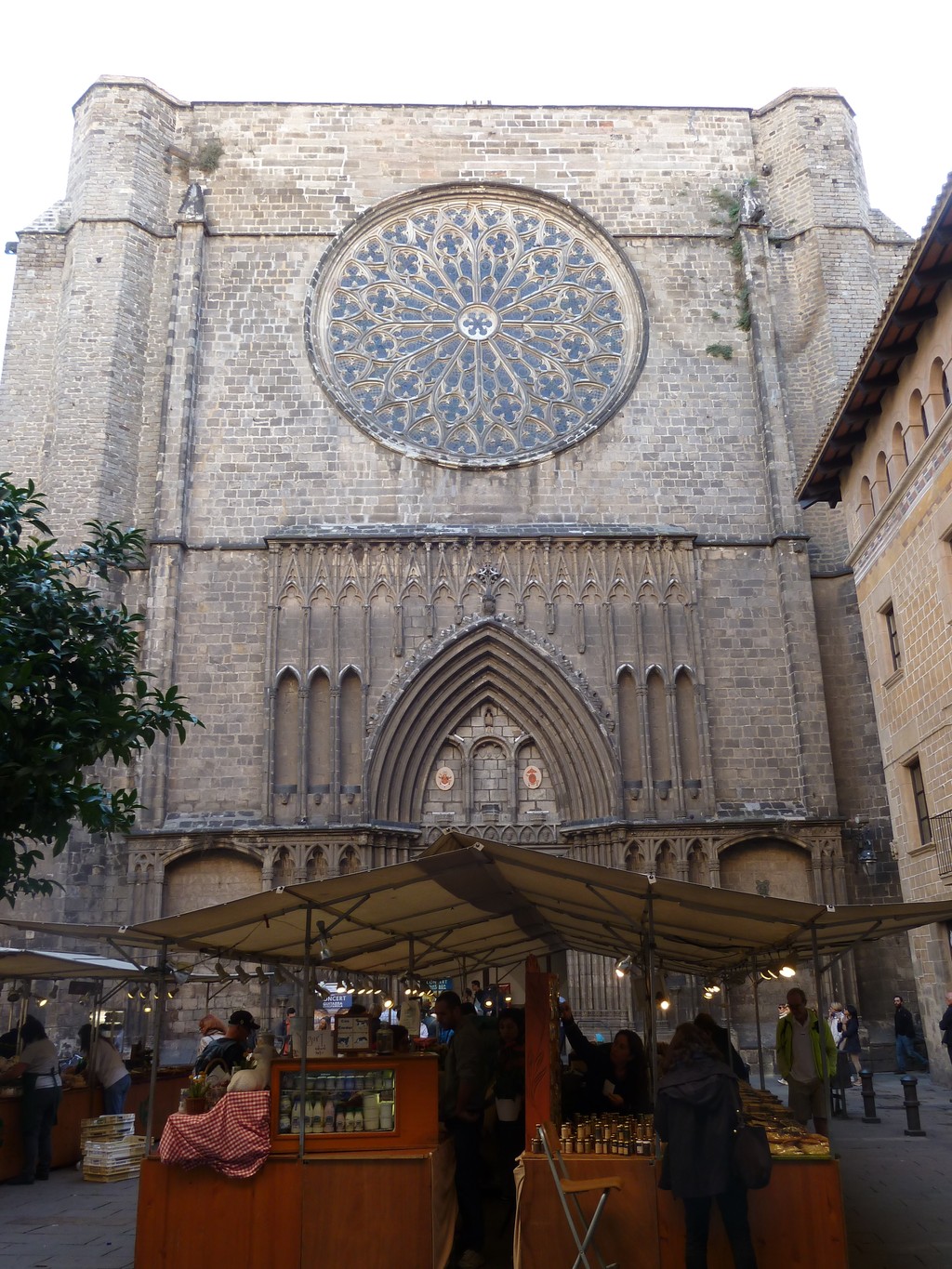 Plaza del Pi gradually gives way to the nearby Plaza de Sant Josep Oriol, probably the finest square in the Barri Gotic. Its name comes from the outstanding parish of Santa Maria del Pi who lived at the end of the 17th century and was made saint due to his several miracles. The atmosphere is made special by the lively presence of musicians and street painters, standing in front of the pleasant cafes overlooking the square. After leaving the plaza, a stroll for Carrer de la Palla finally brought me to the very heart of the city centre, Plaza de la Seu (picture number 1). Along the way, though, there was still time to see part of the ruins of the ancient Roman walls. Despite the iron bars which prevent people from coming close, it is nice to admire the contrast between the old bricks and the fresh, colourful cyclamens surrounding them (picture number 3). 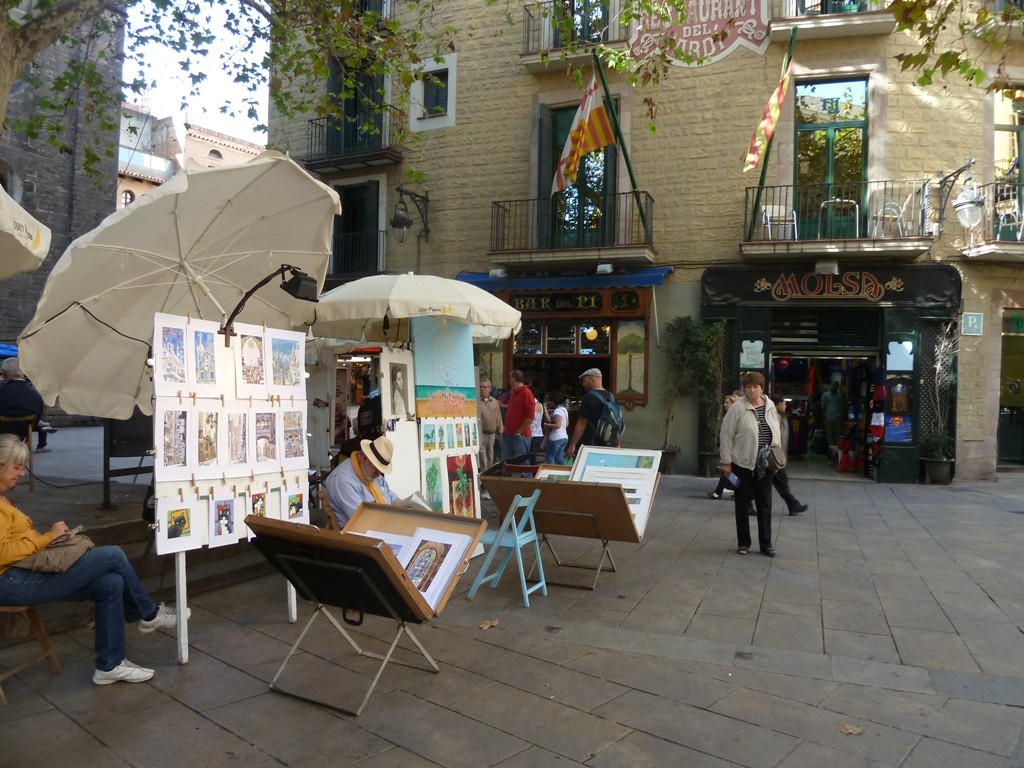 If you know Barcelona as native, traveler or as exchange student... share your opinion on Barcelona! Rate different characteristics and share your experience.

View all Erasmus in Barcelona