Discovering Fatima - A journey through tradition and faith

Discovering Fatima - A journey through tradition and faith

Travelling is something really incredible, it is an activity which takes you to the remote corners of the world and lets you discover new places and cultures. Throughout a journey, you can learn new things both on your destination and on yourself. That's why, especially if you are a keen traveller, you should be able to differentiate among the several kinds of travel and the different destination you can reach. Concerning introspective journeys, you should better follow your faith and inclinations. An example could be the visit to FATIMA, a small area in the municipality of Ourém, central Portugal. It is famous all around the world thanks to the Sanctuary of our Lady of Fatima, one of the most important Marian sanctuaries of the world.

If you want to fully experience the excitement and magic of this place, even if you are not religious, the best choice is to visit it when the religious celebrations take place so that you can share the emotion with hundreds of thousands of other pilgrims. The Sanctuary is visited by millions of tourists every year, who came on pilgrimage from all over Europe and the world to this holy place in Portugal. Fatima owes its fame to the six Marian apparitions to the three young local shepherds, all of which took place in 1917. However, all the pilgrims who go to Fatima plan their journey mainly on two specific dates of the year: those of the first and last apparitions, on the 13th of May and October respectively.

Fatima is located almost in the centre of Portugal, 187km south of Oporto and 123km north of Lisbon; so you can get there from both these major Portuguese cities. From Oporto it takes about 2 hours by car along the A1 motorway for about 200km or you can take the bus, which leaves about every 30 minutes from Oporto's central station. From Lisbon, Fatima can be reached in 1 hour and 20 minutes by car driving along the A1 motorway. Buses are faster and more comfortable than trains and leave about every hour from Lisbon's Sete Rios central station heading to Fatima. The rides are from early morning until late afternoon, with a journey time of about 90 minutes.

The must-see in Fatima are, of course, all related to the apparition of Our Lady to the three young shepherd, Lúcia de Jesus dos Santos (10 years old) and her little cousins Francisco and Jacinta Marto (9 and 7 years old). Below, I'll summarise all the monuments to visit within the Sanctuary area, together with a photo report, so that you can get your bearings if you want to visit it. The most important and famous place in Fatima is, without any doubt, the Marian Sanctuary, a place of worship and the city's main point of interest. The Sanctuary area, in addition to the beautiful neoclassical Basilica of Our Lady of the Rosary (Basílica de Nossa Senhora) designed by architect Joao Antunes, includes the Prayer Enclosure and the famous Chapel of Apparitions.

The Basilica of Our Lady of the Rosary

The Portuguese Basilica of Our Lady of the Rosary was built in 1928 and consecrated 25 years later, in 1953. The Basilica of Fatima has monumental porticoes facing a large flat area that, during pilgrimage periods, is filled with faithful. Inside the Sanctuary of Fatima, there are 15 altars dedicated to the 15 mysteries of the rosary and the tombs where the three young shepherd (beatified in 2000) who witnessed the Virgin's apparitions lie.

The Chapel of Apparitions is, without any doubt, the most visited place in Fatima. It takes the form of a small sloping roof with a white column inside, symbolising the place where the first apparition of Our Lady took place in 1917. Unfortunately, all that tourists can see today are the remains of the original chapel. In 1922, it was destroyed by sceptics who did not believe in the apparitions and miracles of Our Lady of Fatima, linking them to a publicity stunt by the local church.

Monument to the Sacred Heart of Jesus A monument dedicated to the Sacred Heart of Jesus stands imposingly in front of the Sanctuary of Our Lady of Fatima. As a sign of penitence, many pilgrims walk on their knees from the Basilica entrance to this Monument. 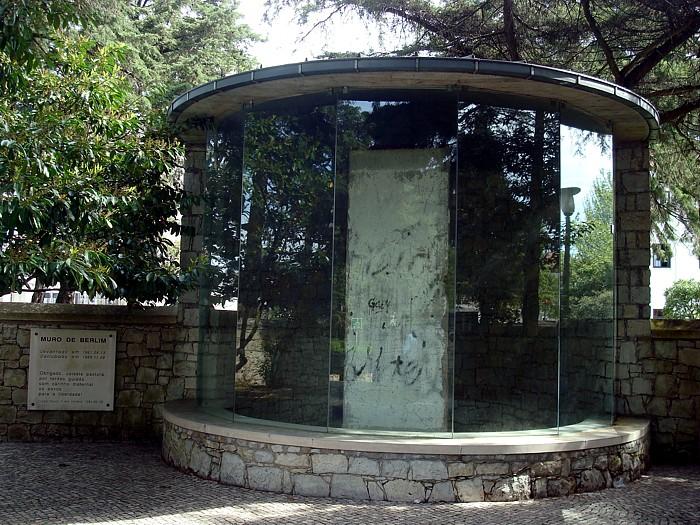 Next to the entrance of the Sanctuary, you can admire the Monument to the Berlin Wall. It is literally a piece of the Berlin Wall weighing almost 6 tonnes which came to Fatima as a gift from a Portuguese man who emigrated to Germany.

The whole visit had a mystical feel in it, I can't actually explain it, but those large spaces, the path of penance and the glowing white, made the place sacred no matter the religion. A mystical place, even for non-Catholics, which makes you feel the smallness of the human being and the journey towards this white building that spreads its arms with the white semicircular colonnade...

Arrived at the Sanctuary, I found myself in a large rectangular paved square, about 500-600 meters long and 200 meters wide. There weren't many people and it seemed almost desert, considering the size of the spaces. The buildings were located on the sides, rather low, almost all white and very modern in style. I started the visit heading towards the Basilica, a neoclassical style building, with a high bell tower placed on a monumental staircase - everything seemed to be made of white marble. At the sides stood a beautiful neoclassical style colonnade where I noticed the passage, in marble slabs, reserved for the faithful who go through it on their knees, and that ended basically in front of the Chapel of the Apparitions. It is the most sacred place, built of transparent glass with a concrete structure. Inside you'll find the tiny chapel and the marble column that indicates the exact location of the apparitions of the Virgin, described by the young shepherd as "a lady brighter than the sun". It is located in front of the statue of Our Lady where Pope John Paul stuck one of the bullets taken from his body. Inside, religious functions are held continuously (rosaries, masses, prayers, songs). Needless to say, it is the most frequented place, in fact, I have seen it always full of pilgrims in recollection and prayer. Passing by the burning furnace where the faithful throw candles as a sign of devotion, I headed towards the Basilica dedicated to Our Lady of the Rosary: a white building, like almost the entire sanctuary complex, and not very big considering the millions of people going to the Sanctuary every year. To enter the visitors stand in line. The inside is also white. They pass in front of the fifteen lateral altars, devoted to the mysteries of the rosary, walk from right to left, and crossing the corridor they arrive at the two sides of the transept where the chapels with the mortuary gravestones of the three young shepherd are located. I stopped briefly in the church pews (no need to queue here).

The whole complex is very simple. The message is simple too in Fatima, you don't go to see works of art. I left the Basilica to continue the visit, passed in front of the white statues of the two young shepherds (Francisco and Jacinta Marto) located in a small elevated lawn, and then went to the church of the Holy Trinity: a large complex located on the opposite side of the Basilica. It is circular in shape, built with white marble, and vary large (about 130 meters in diameter). Arriving on the square, from afar, I had mistaken it for a convention centre (because of its shape). On the square in front of the church, you'll fin a large and very high dark metal cross of very modern style, the statues of John Paul II and Paul VI, the popes who made a pilgrimage to the place, and a beautiful entrance portico with sculptures of angels suspended between two beams. The door is in bronze and is dedicated to Christ. On its side panels are illustrated the mysteries of the rosary. There are another 12 doors also in bronze dedicated to the apostles. I then entered the church; the walls were white, a singular circular nave with a diameter of about 130m, a single altar placed in the middle of the wall, with a large rectangular mosaic depicting the heavenly Jerusalem and the saints, gold in colour. The mosaic is inspired by the Apocalypse of St. John, it seemed to me to be divided into two parts and it is very complex. Everything that is represented has complex theological implications with precise references to light as the manifestation of God, a concept already present in Plato and which also inspired the architects of the Gothic cathedrals, especially Chartres. In the mosaic, God is represented by the Lamb, and the saints on the right and on the left are depicted in different tones, to convey that they have been illuminated by light and, therefore, by God. Of course, there are references to Fatima. Above the altar, there's a large bronze crucified Christ. Then I went down to the basement where I stopped on the long corridor made of walls covered with azulejo, representing scenes from the lives of Saints Peter and Paul. The corridor led to a series of chapels and confessionals.

Those wishing to visit Fatima can feel the atmosphere of worship also in other places linked to the Apparitions of the Virgin: just 3 km away from Fatima there's Alijustel with the Houses of the Three Little Shepherds; visiting the homes of the children who witnessed the apparitions will help the faithful to understand the lifestyle of the village before the Basilica was built. Pilgrimage lovers or simply hiking enthusiasts will be able to start out from the 'House of Lucia' on a route leading to the Sanctuary, the Via Sacra or Via del Calvario. Also worth visiting in Fatima and in the surrounding area is the Station of the Cross with its 14 chapels (the last one was completed in 1992); the chapels are located along a three-kilometre route that leads to the marble statue of Christ on the Cross.

Do you know Discovering Fatima - A journey through tradition and faith? Share your opinion about this place.

View all Erasmus in Fátima