The Black Sea in winter

Șchiopu Monica — one year ago

The Black Sea in winter: better than in the summer time, but why?

For my friends and I having a one day trip to the Black Sea in winter time has already became like a tradition and that’s because neither of us doesn’t like to go there during the summer or in a full season when the weather is too hot and there are to many tourists everywhere. 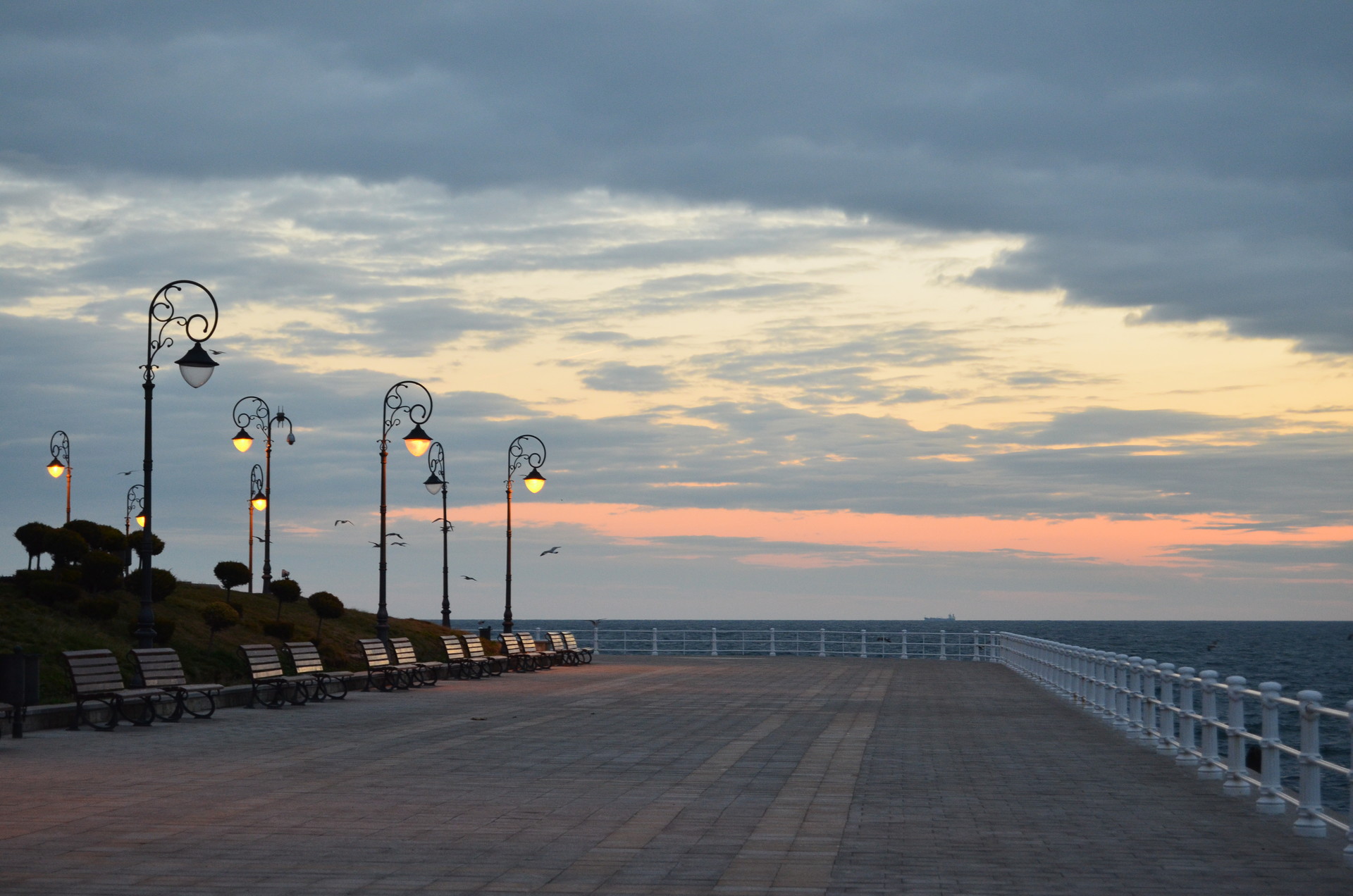 Thus, we usually have this journey in January or February when the beach is empty and we can enjoy the beauty and peacefulness of the sea’s shore in a different and much better way even if there is no possibility to also take a nice swim in the water due to the cold.

From Bucharest to Constanța in 2 hours!

In these day, is quite easy to go from Bucharest to Constanta by using the train. For students the tickets are free (otherwise one way costs around 60 lei meaning 12 euro) and the journey lasts around 2 hours and a half with an Interregio train which is a fast train.

About the harbour city of Constanța, why is this place important in Romania?

If you didn’t knew about it before, yes, Romania has a sea, the Black Sea, which is located in the south eastern part of the country and Romania shares the sea with other countries such as Bulgaria, Turkey, Ukraine, Georgia. 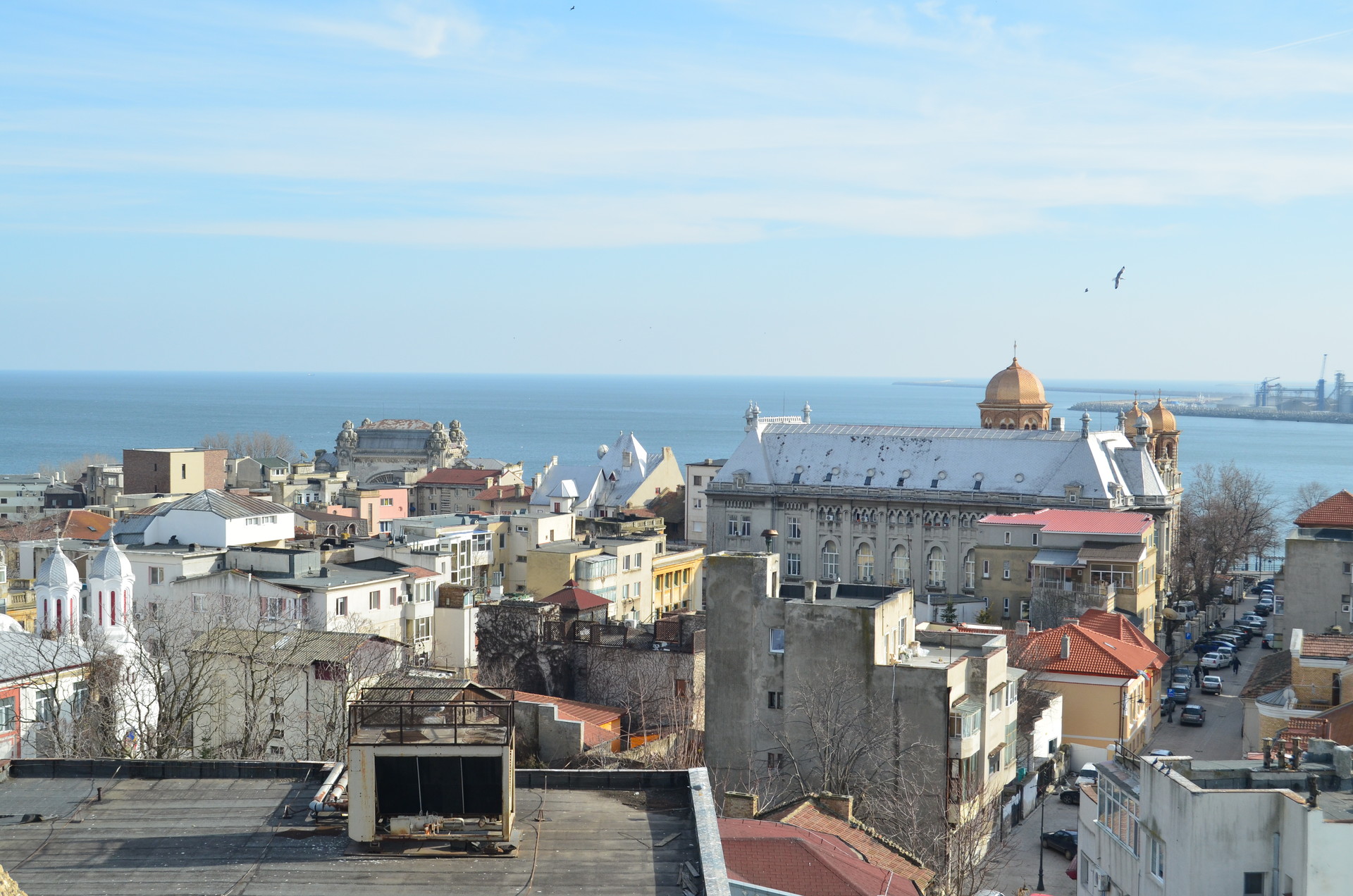 There are many cities – more like resorts – situated all across the opening of the sea, but, going with the train, Constanța is the first one, thus, the closest and also largest one, being the city residence of the Constanța County, but what’s even more impressing and important about this city is linked with the fact that Constanța is the largest port in the entire Black Sea basin, ranking the 4th place in Europe.

I should as well mention that Constanța is one of the oldest city in Romania, its roots dating back to the 7th century A.D., a time when the settlement had another name, Tomis. 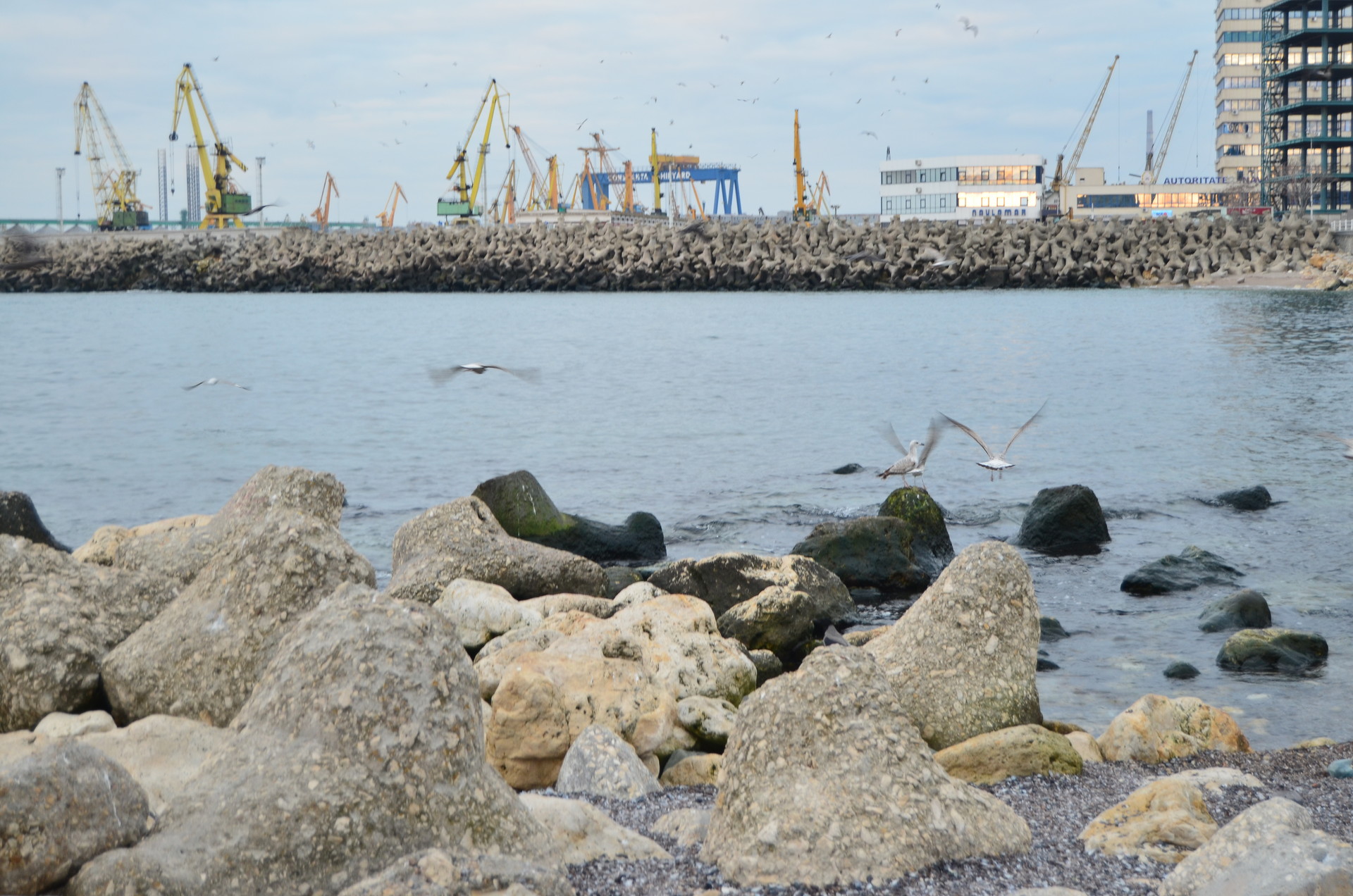 After we arrive in the train station, we find our way to the main seafront of the Black Sea and, by walking, it takes us approximately 30 to 40 minutes. Lately, the seafront has been carefully and beautifully arranged with a large pedestrian way benches or resting places and green areas with statues. We find a calm, enormous horizon of blue water – no the sea is not actually black, which is so relaxing and refreshing to just watch. 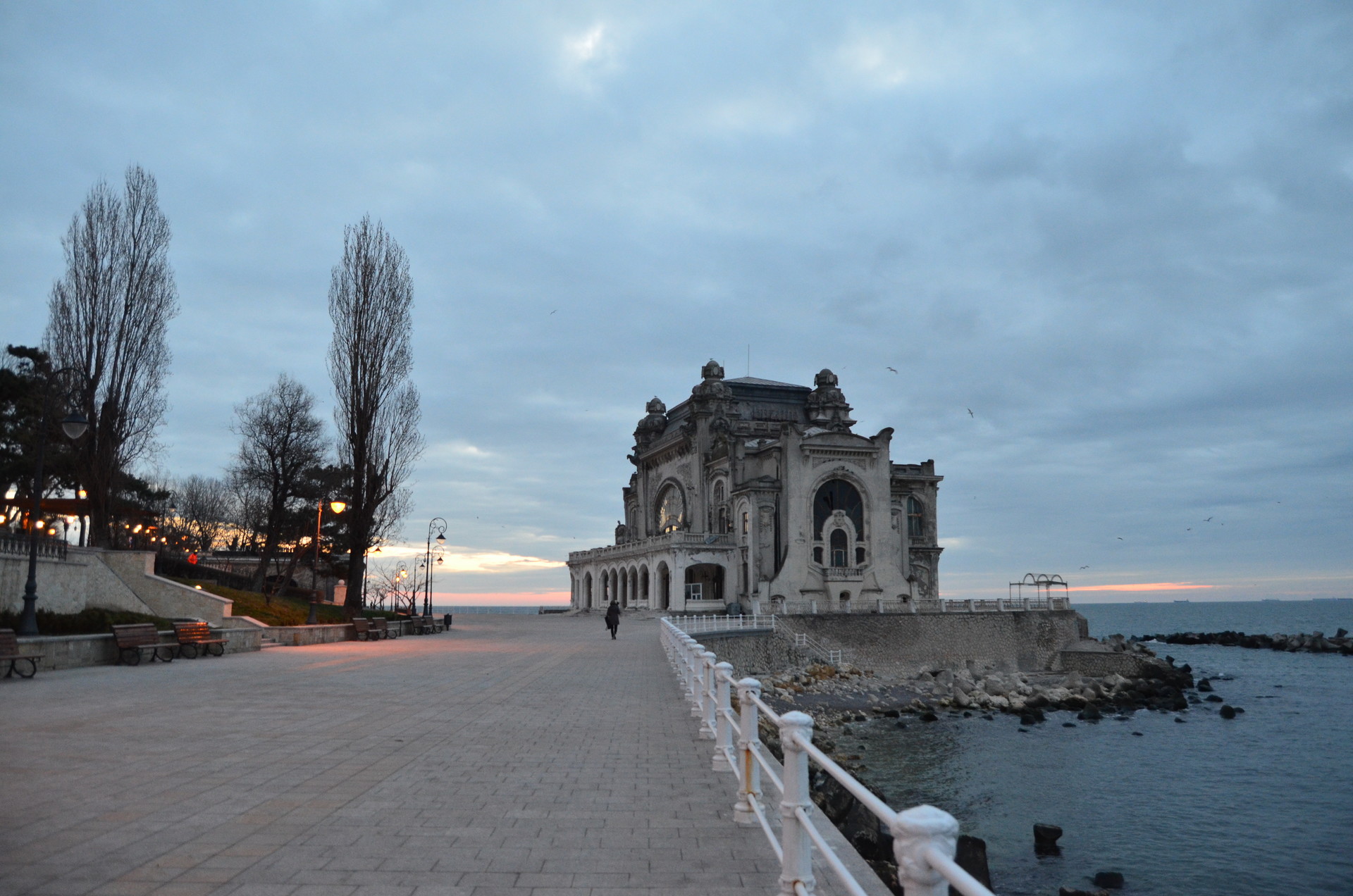 Unfortunately, one of the landmarks of the city that is located on the seafront, „the Cazino” is still not taking cared of, thus it cannot be visited on the inside, but only looked at from the outside. The construction is indeed, imposing in the landscape with its art nouveau architecture and is a tourist attraction even if the casino cannot be visited.

Watching the sunrise from the seafront: a calming experience 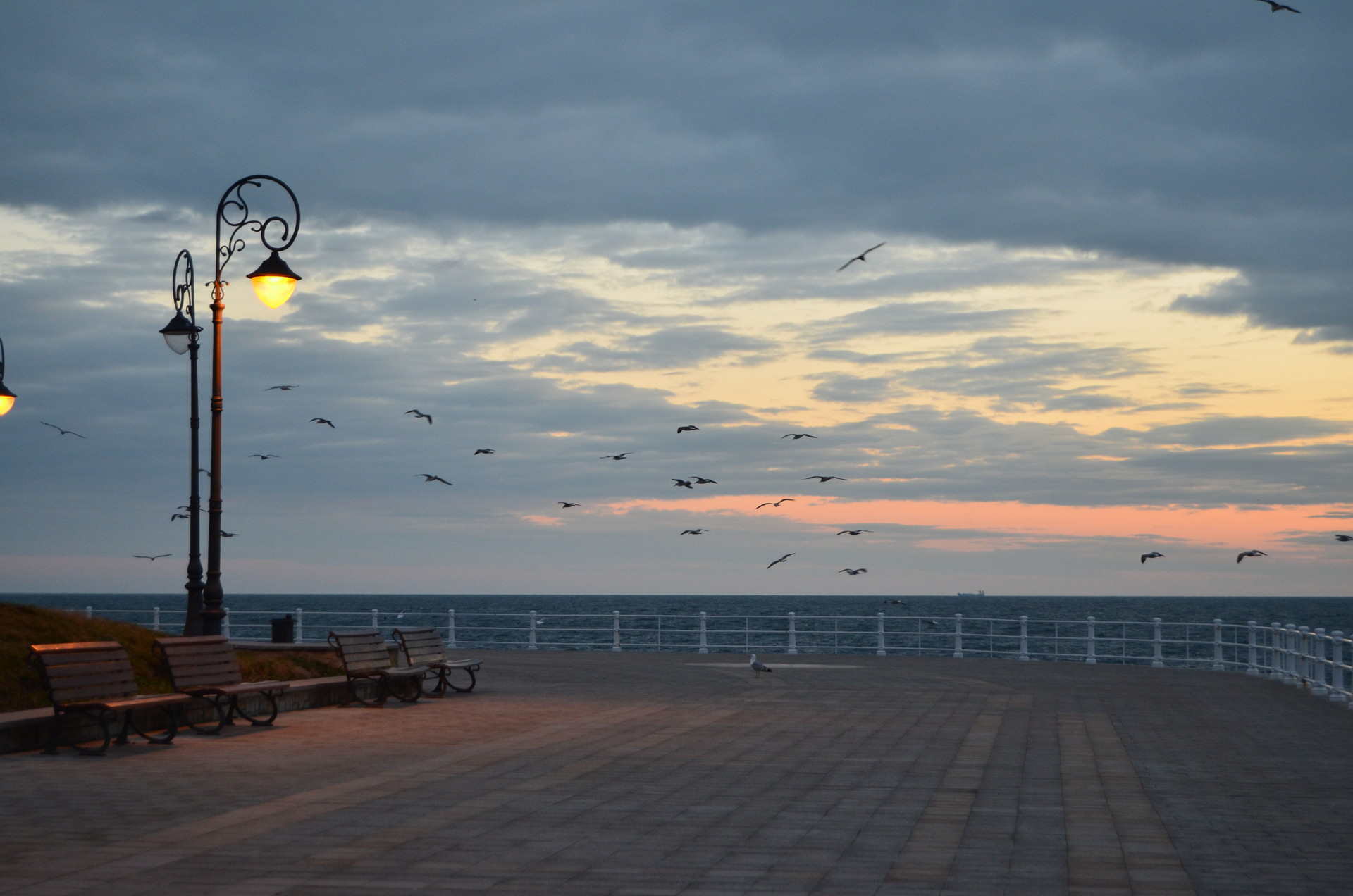 We arrive on the seafront before sunrise, there is nobody here, only we are and we have the chance to see a very romantic appearance of the place: the sky is slightly colored in shades of pink or orange, being crossed by many noisy seagulls, the lamps of the sea front are still lightened up, the long spreading of water stands still, but we can hear the sound of the waves beating the shore. 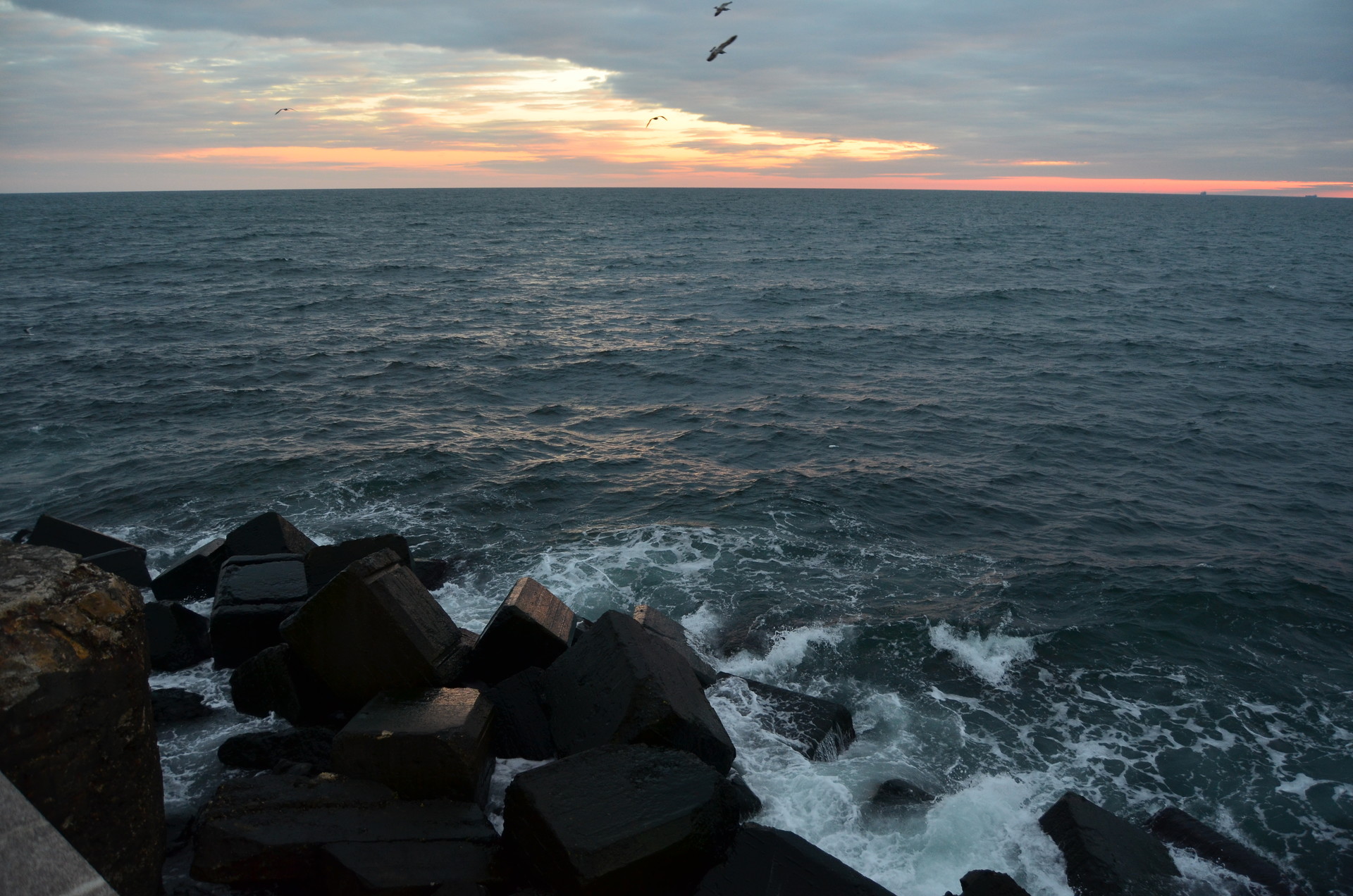 Suddenly, as we are keeping on eye of the sky, the sun appears over the sea, reflecting its light beautifully into the vast amount of water. Slowly, the day light increases and, far in the distance, we can also notice many big boats floating onto the sea. It feels so energizing and at the same time melancholic in a way, to come here, taking everything that’s around and feel the specific air of the sea. The views are spectacular, but also very peaceful and changing. 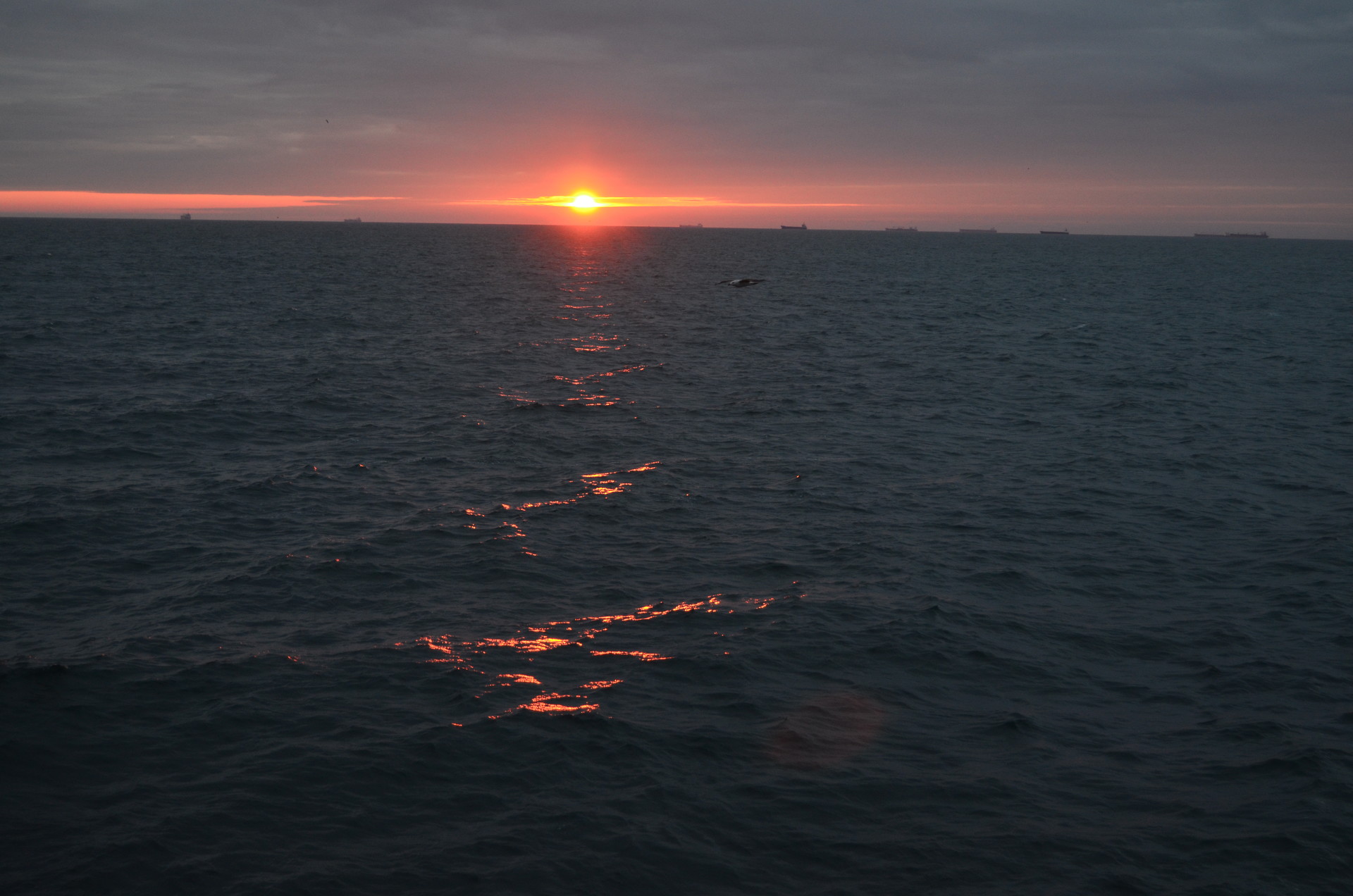 Closer to the casino are positioned stairs which allow us to reach a little beach that connects directly to the water, so we go there and walk on a beach full of seashells and seagulls, the last ones getting, of course, scared by our presence and flying away. We come down here to try the water’s temperature which is surely very low, definitely not appropriate for bathing or swimming. 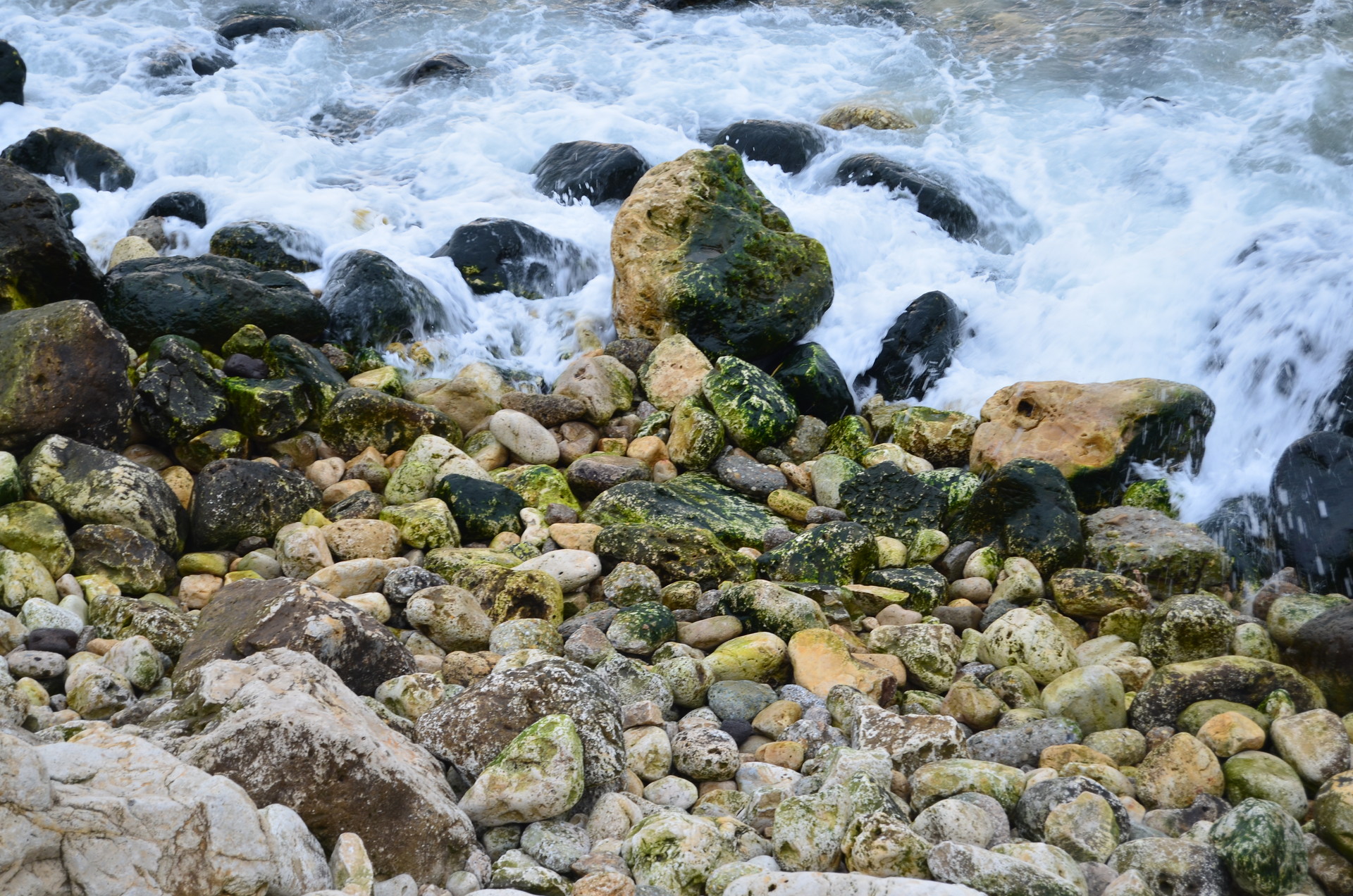 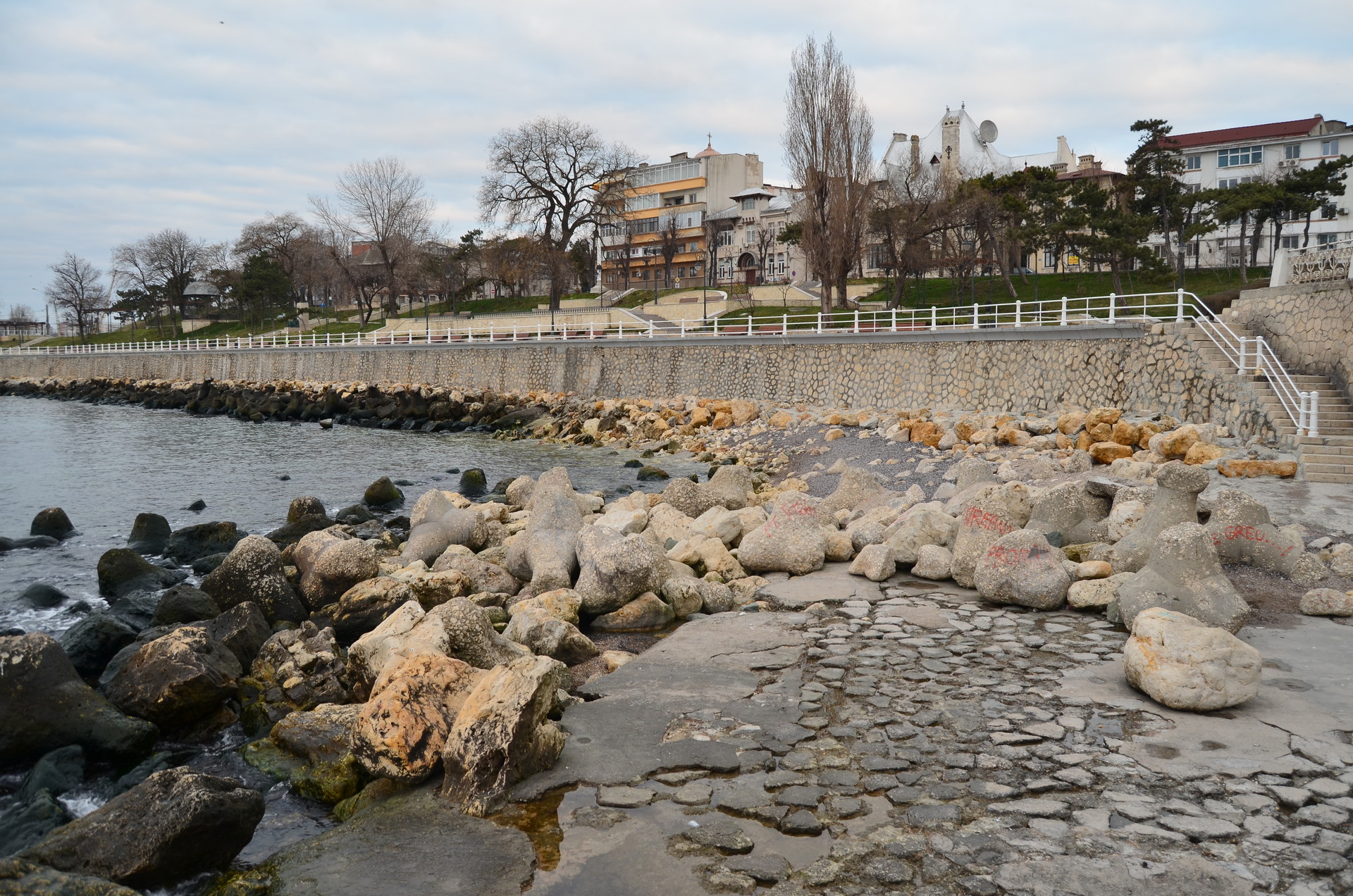 In another words, from here, the Constanța seaport, is visible in the distance, dominating the landscape with its industrial constructions cranes and mighty boats. After we take lots of photographs and enjoy the sunrise scenery, we decide to explore the city as well by strolling its old city center streets. 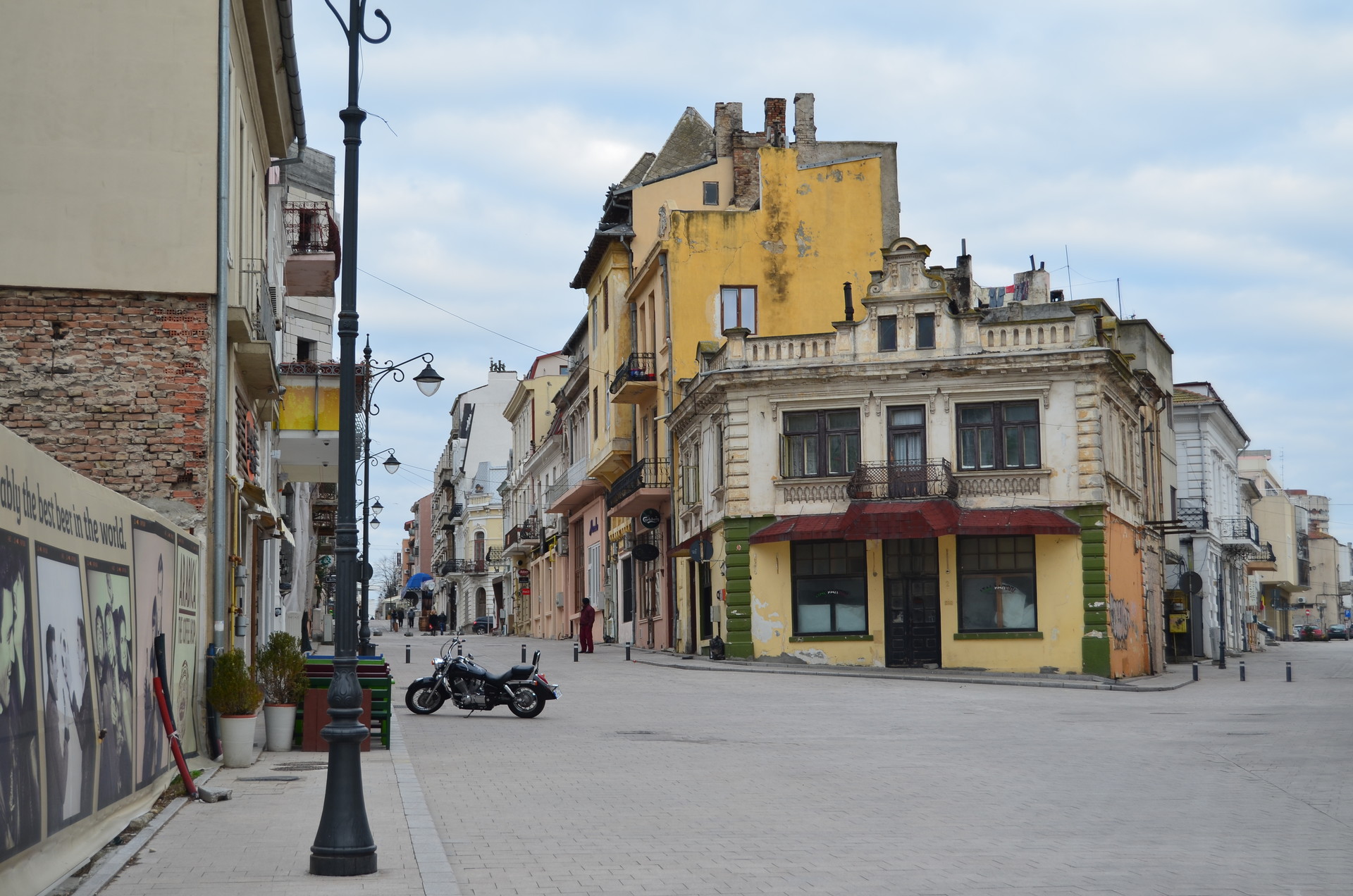 The great Mosque of Constanța: small history about it

A tourist attraction that we visit is the so called Great Mosque of Constanța located on Archbishopric street at number 5 in the Ovidiu Square.The historical monument also known as the "Carol I Mosque" is dating back to the beginning of the 20th century, more precisely in 1913, when the construction was finished and inaugurated by its commander, the Romanian King Carol I, who built it for the Islamic community of the region. 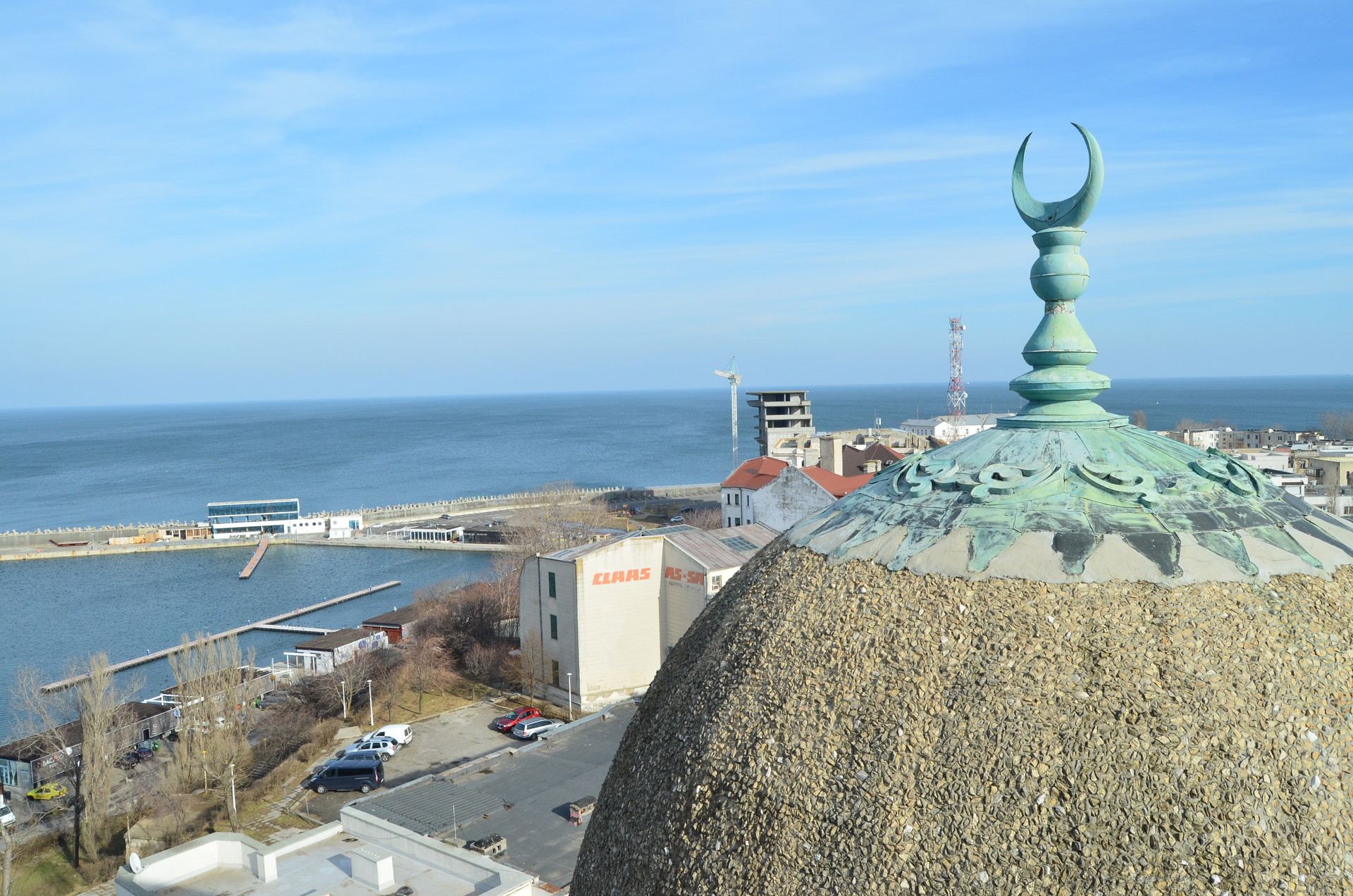 How much it costs to visit the monument?

Today, the mosque remains as the main building of Muslim worship in the country.To get inside the monument for visiting we pay a fee of 2 lei ( just a few cents) because we are students, otherwise, the ticket costs 4 lei (almost 1 euro).

Climbing the minaret of the mosque to see the panoramas

An exciting experience is ascending the minaret by using a tight spiral staircase at the end of which we find a balcony and from where we are pleased to admire a wide panorama over the Black Sea and its harbor city. The minaret is 40 meters high and we can see everything from here: the view over the sea is particularly spectacular and is worth the climb up here surely. 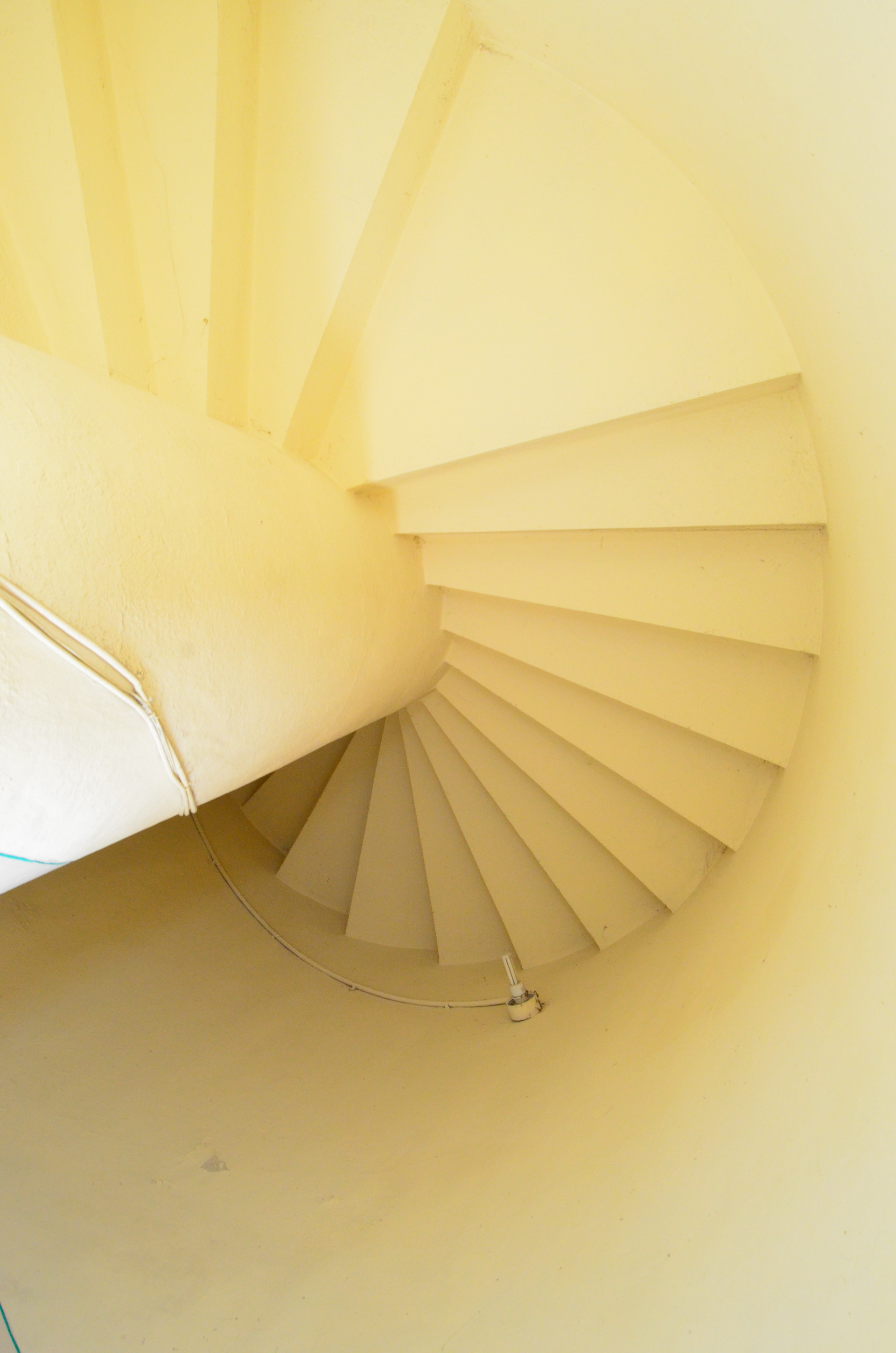 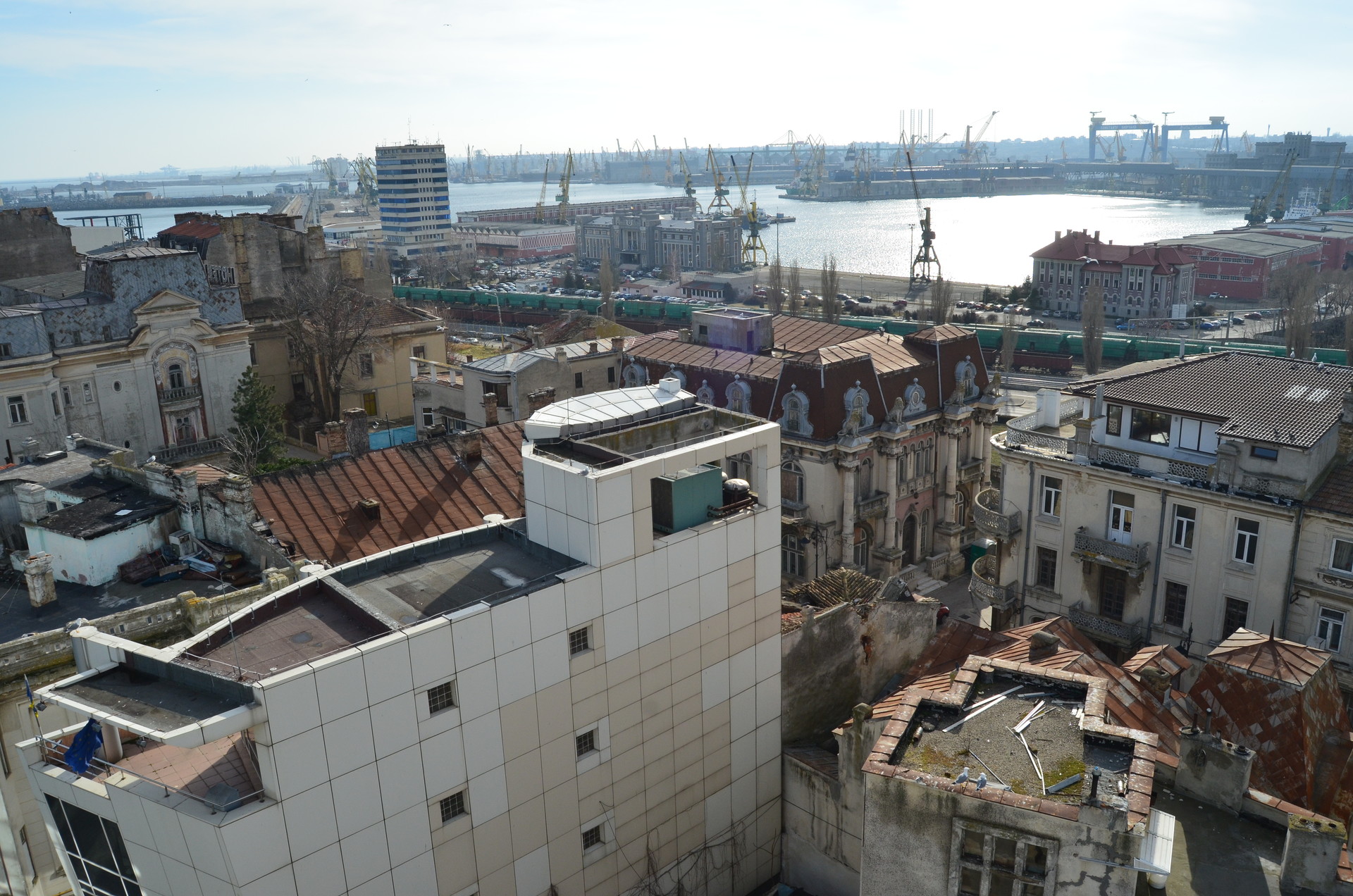 The perspective over the surrounding areas, makes us to understand better the configuration of the place we are in, thus, I think and I highly recommend everybody who visits Constanța to ascend the Mosque’s minaret. 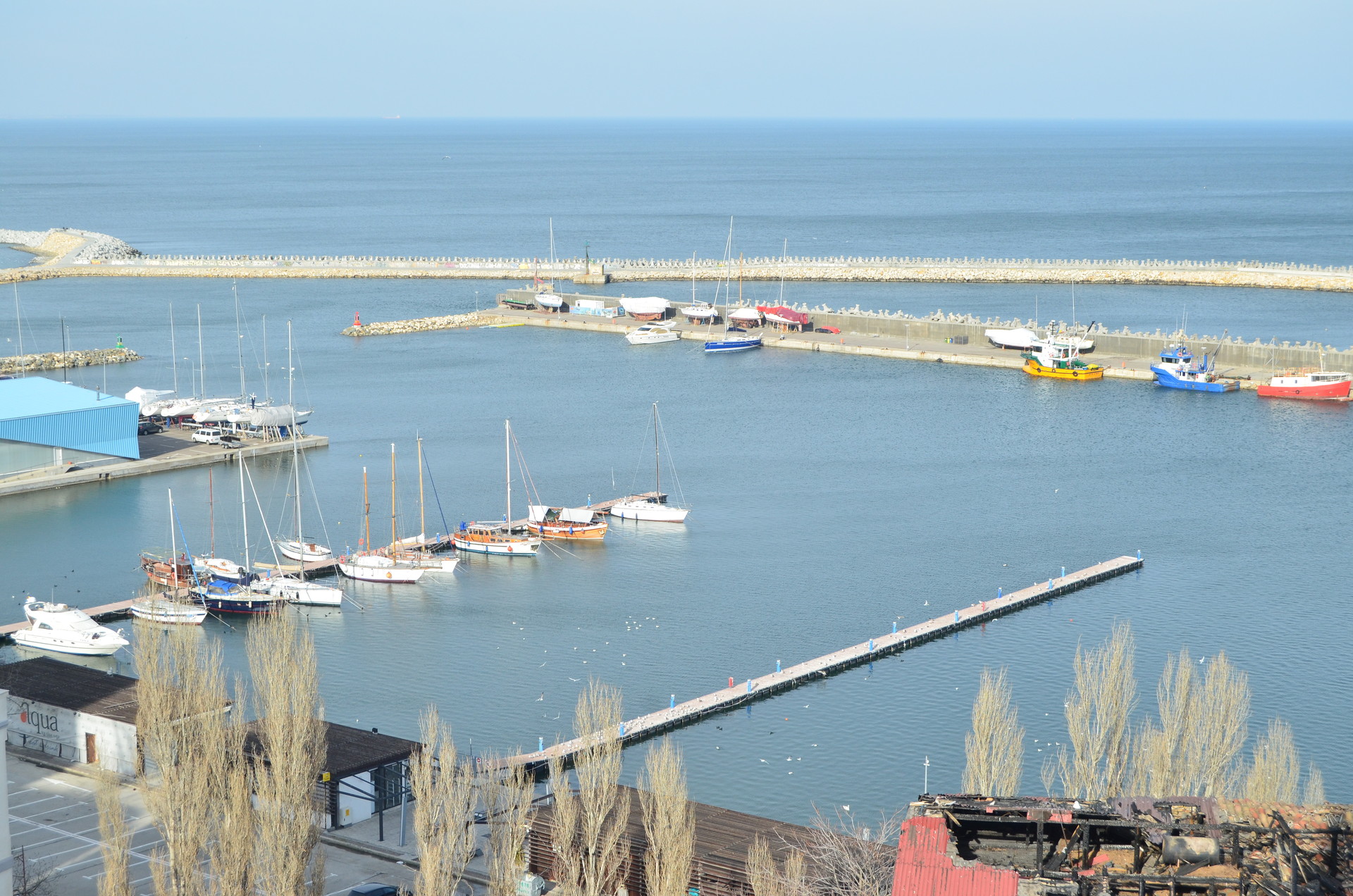 The dome is visible too and it feels like we are standing on the roof of the mosque, although the dome is shorter than the minaret, with a height of 25 meters. 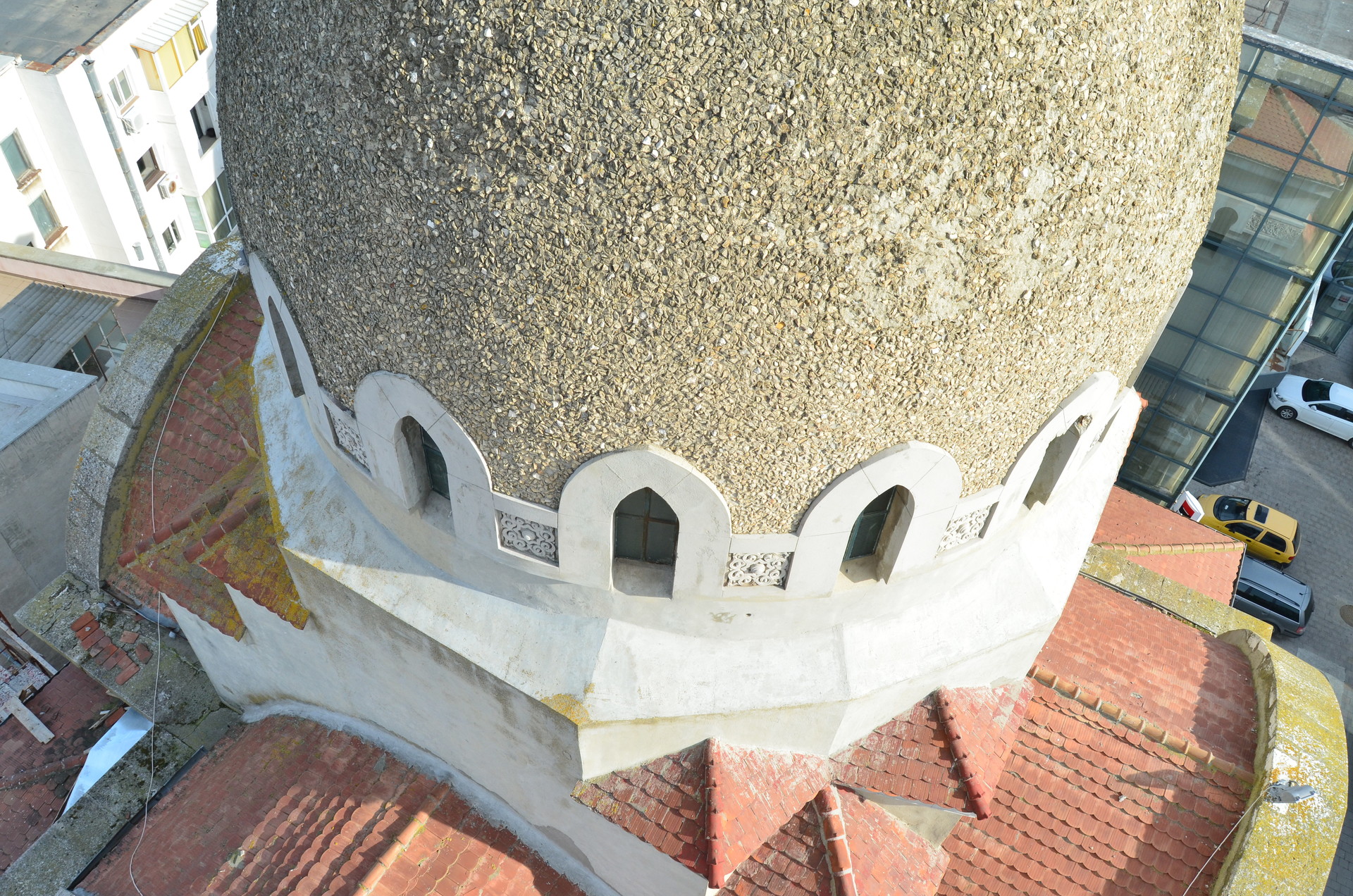 We spend a lot of time on this balcony because we cannot get enough of the views, plus, we are lucky because the weather is sunny, so the sky is clear, allowing us to see thoroughly in the horizon.

The interior of the mosque: the altar and the floral decorations

When we go down, we get an inside look of the hall of the mosque too. It is probably my first time when I find myself inside a mosque, thus, everything seems new and different, but interesting. For example, in comparison with the orthodox or catholic churches, the interior of the mosque is rather sober, lacking in statues or religious images due to the fact that in the Islamic religion icons or representations of God are totally forbidden. 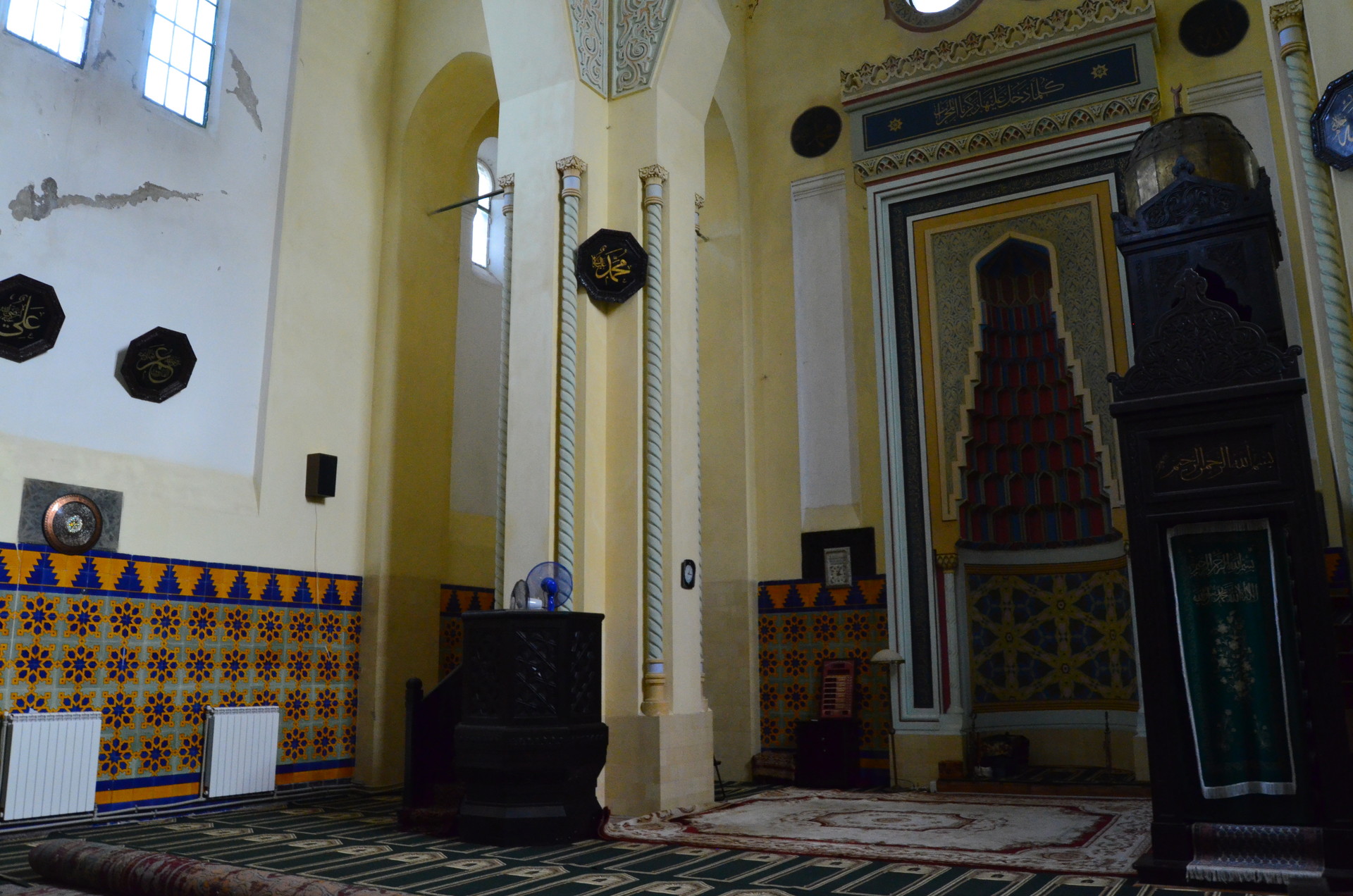 An eye catching piece is the altar, situated in the middle of the south wall, facing, of course, Mecca. The altar is polychrome decorated having a semicircular shape, like a niche. 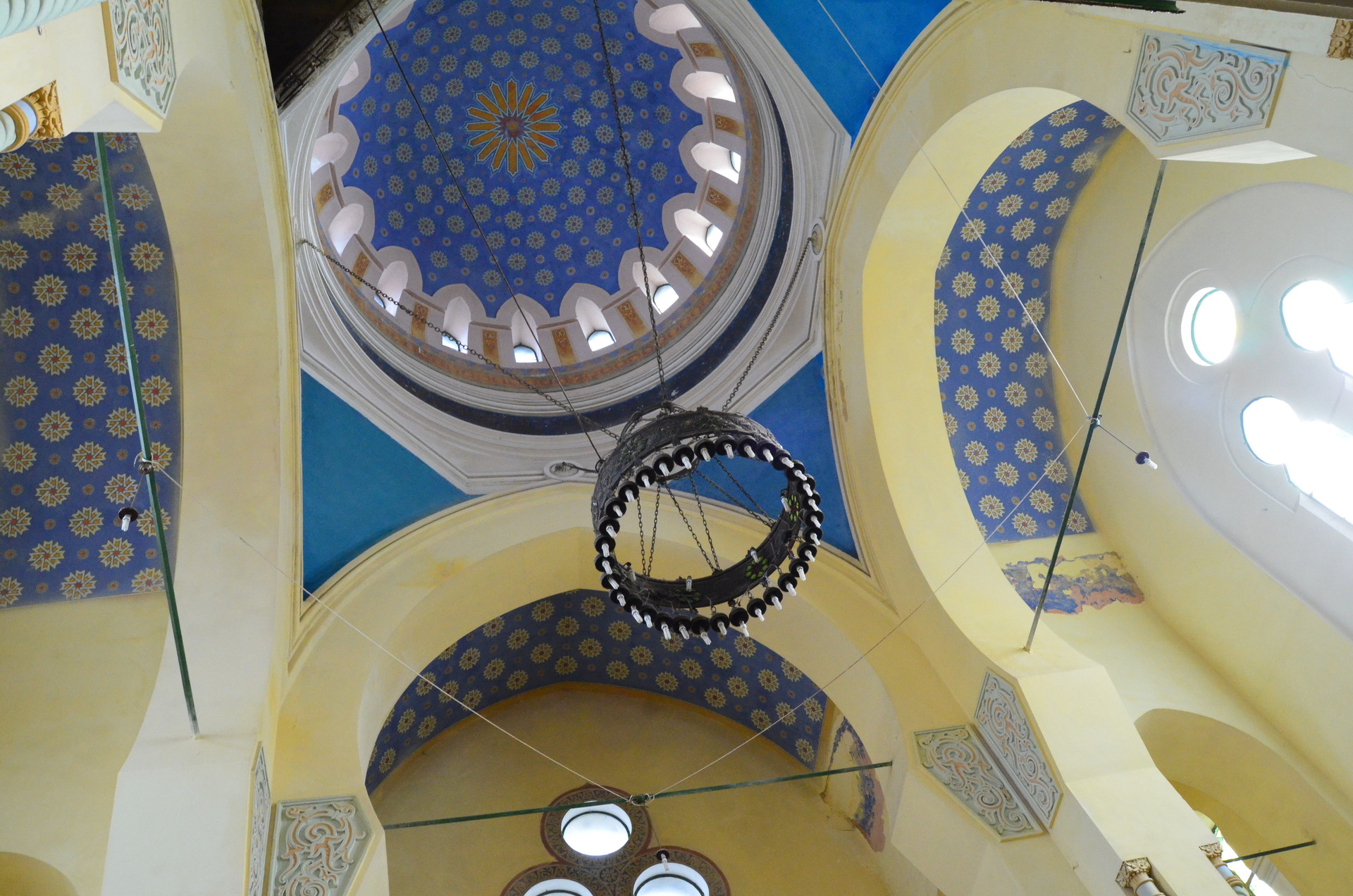 Back to the sea: feeling the sand below our feet and playing like children

After visiting the mosque, we are heading towards the sea again and are going down on the beach to take a nice walk on the sand which is not warm or hot, even if the sun is still shinning. The sensation of walking by the sea’s shore is so invigorating and soothing. The broad stretching of the Black Sea is simply wonderful. We have all of this long beach only for ourselves, since there are just a few people. 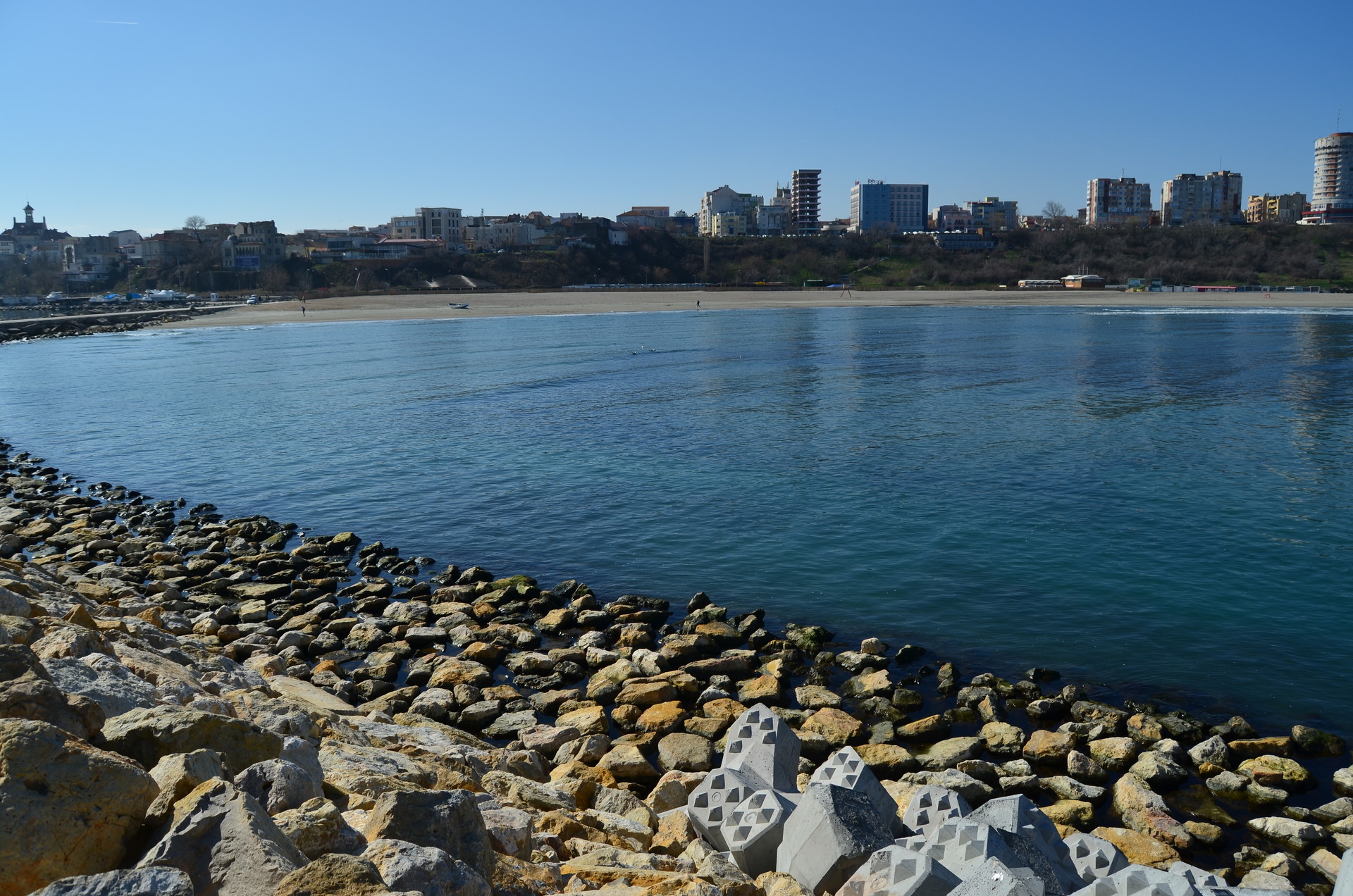 Though is winter, when you see the sand and the sea’s shore, how can you resist the urge to take the shoes off to feel the sand directly to your feet? And how about the water and the little waves? Whereas we are here. We have to try the water too and, of course, as we thought, is extremely cold, but experience is on the other hand very funny. 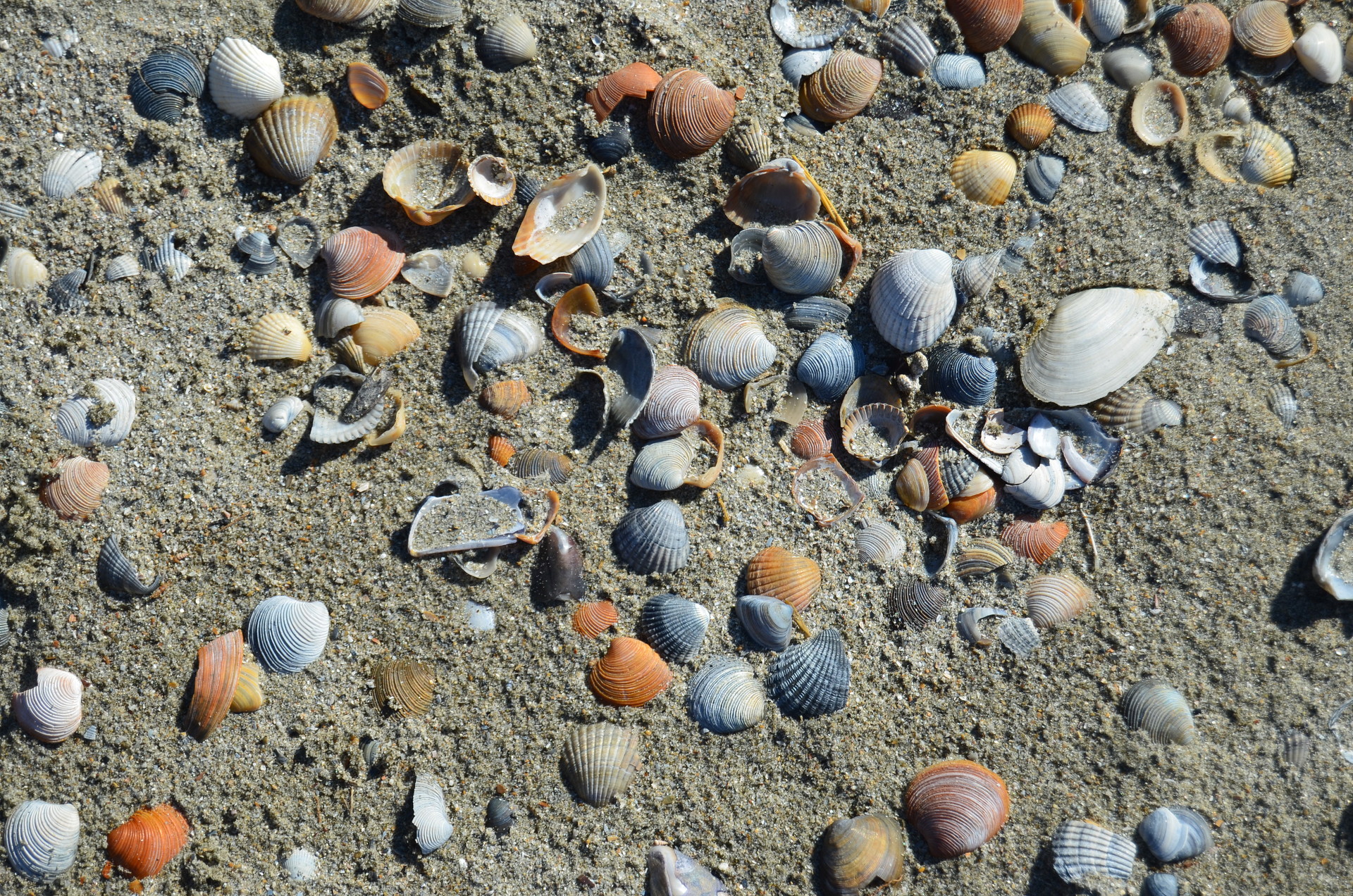 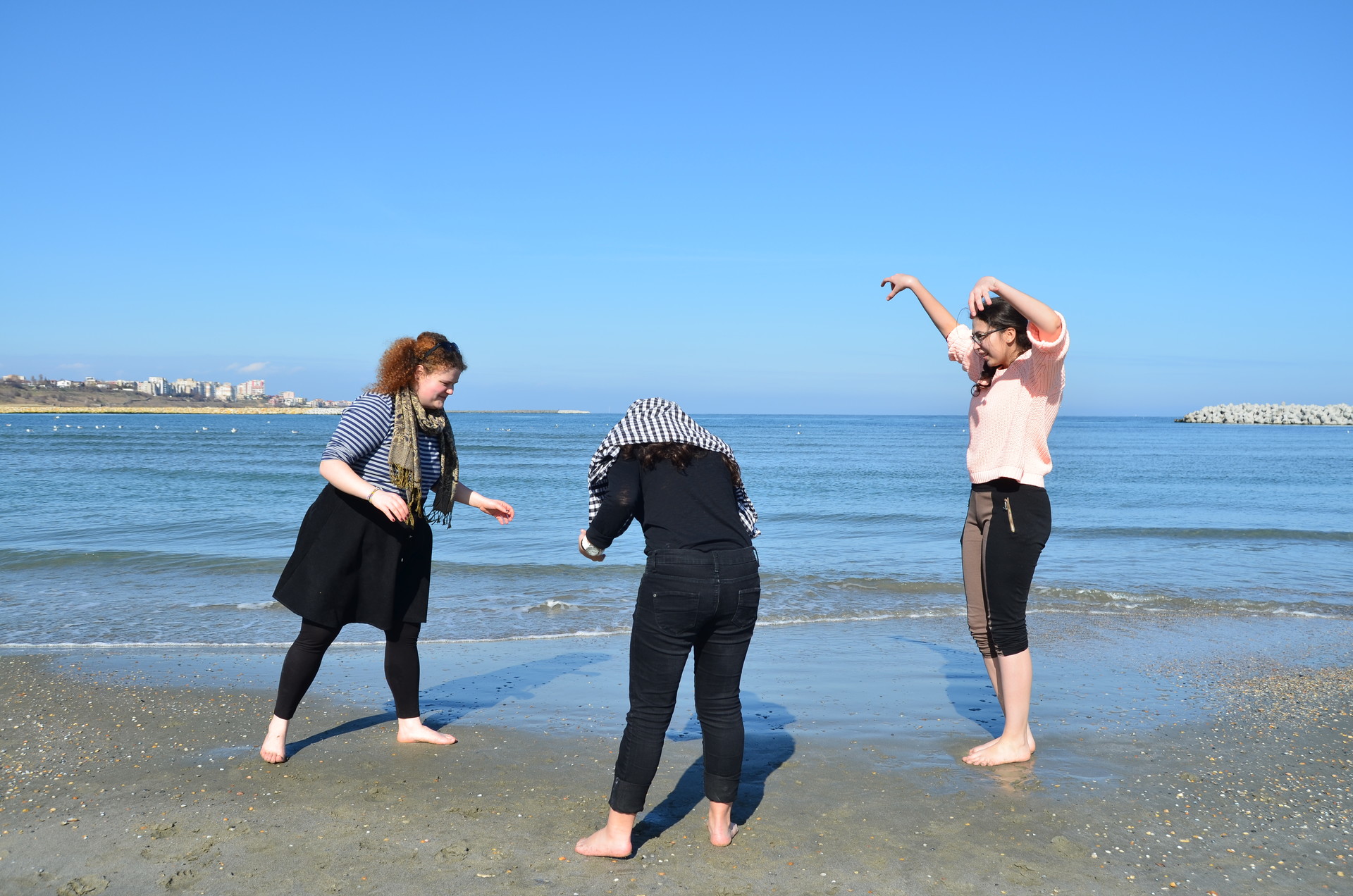 Somehow, in the following moments, the shore becomes like a playground for us: we are running around, collecting seashells, bathing our toes into the chilly doing all of these activities. We just have a great time and maybe that’s why we are always coming back to this place every year in winter.

If you are currently doing an exchange mobility in Bucharest and have same free time on the weekend or even during the week, don't think about it to much, just take a train to Constanța and enjoy the Black Sea because is beautiful in the winter time as well and you might like it even more now than in the hot summer days.

View all Erasmus in Constanta